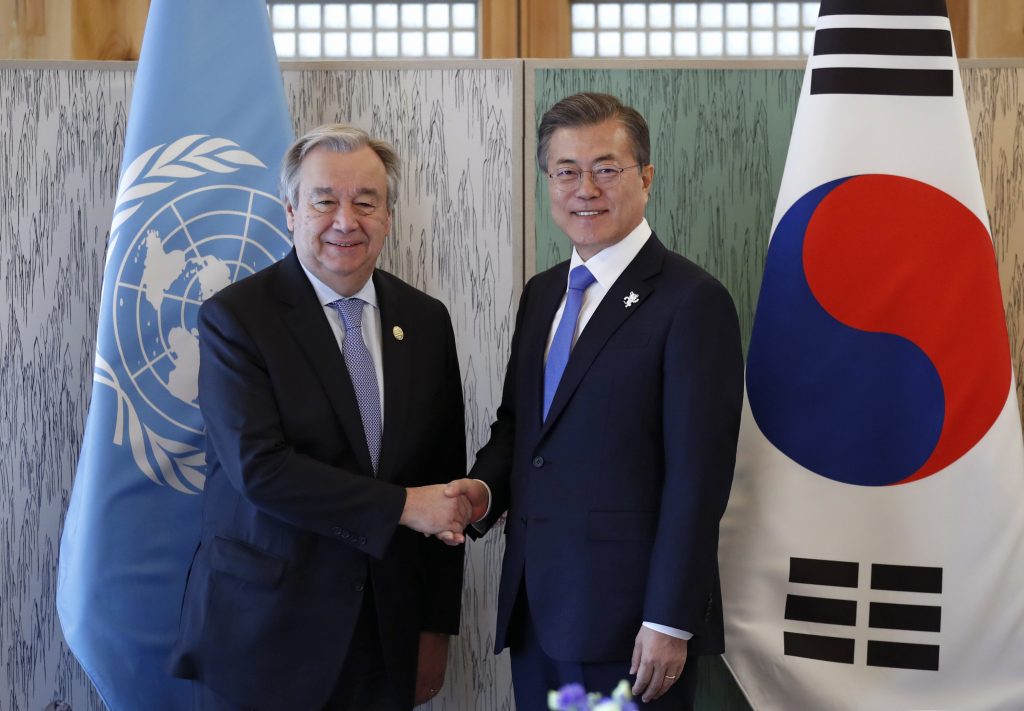 North Korea’s state news agency said on Sunday its delegation sent to the Winter Olympics held “frank and candid” talks with South Korean President Moon Jae-in but there was no mention of the North’s invitation to Moon to Pyongyang for a summit.

The delegation, the highest-ranking to visit the South, concludes its visit later on Sunday having charmed and intrigued the South Korean public, but still faces deep skepticism over the North’s sincerity towards improving relations.

Any summit between the two still-officially warring Koreas would be a coup for Moon, who has been pushing for a diplomatic solution to the standoff over North Korea’s nuclear and missile programs.

Kim Yo Jong, the younger sister of Kim Jong Un, “courteously” handed over a personal letter from the North Korean leader to Moon during talks on Saturday and also told Moon of her brother’s “intention,” KCNA said, without elaborating on what that was.

South Korean officials have said Moon was invited to Pyongyang to speak with Kim Jong Un during the talks and lunch that Moon hosted at the presidential Blue House in Seoul on Saturday.

Such a summit, if it came about, would mark the first time that leaders of the two Koreas have met since 2007.

Moon and Kim Yo Jong will have another opportunity to talk when they attend the second and final performance by a visiting North Korean orchestra on Sunday evening in Seoul, a Blue House official said.

U.S. Vice President Mike Pence, who has left South Korea for Washington, said the United States, South Korea and Japan were in complete agreement on isolating North Korea over its nuclear weapons program.

A White House official said that, although Moon did not discuss the invitation with Pence on Saturday, the South Korean president made it very clear that only when North Korea actually starts to take steps to denuclearize would anyone even consider beginning to take the pressure off.

The KCNA report cited Moon as saying inter-Korean relations should be mended by the parties concerned “at any cost as indicated by Chairman Kim Jong Un in his New Year Address.”

Kim Yong Nam, the North’s nominal head of state who was also at Saturday’s meeting, said “even unexpected difficulties and ordeals could be surely overcome and the future of reunification brought earlier when having a firm will and taking courage and determination to usher in a new heyday of inter-Korean relations.”

However, South Korea’s main opposition party warned any talks between the two Koreas where the scrapping of North Korea’s nuclear program was not a precondition would only “benefit the enemy.”

“We should firmly keep in mind that any talks where denuclearization is not a precondition only buy North Korea more time to complete its nuclear capabilities while they fool us with their peace offensive façade,” said Chang Je-won, spokesman for the Liberty Korea Party.

Japanese editorials sounded a similar warning, saying dialogue would be meaningless unless it led to denuclearization of the Korean peninsula.

“What cannot be overlooked is that Moon did not directly demand North Korea to abandon its nuclear development … Moon should be aware that he has to urge denuclearization to North Korea by himself, not depending on dialogue between the U.S. and North Korea,” an editorial in the Yomiuri newspaper read.

The North Korean delegation was invited to lunch with South Korean Prime Minister Lee Nak-yeon at the five-star Walkerhill Hotel in eastern Seoul on Sunday, an official at the prime minister’s office told Reuters.

Lee expressed his hopes to the delegation that the “right conditions” would be created for the two heads of state to meet, the official said later.