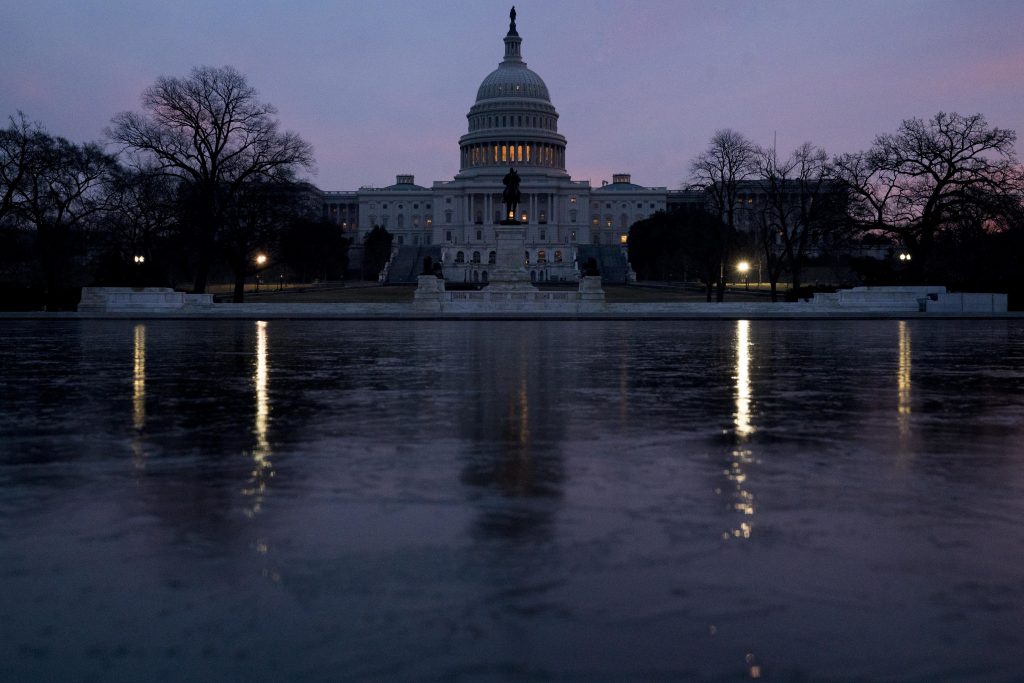 Tea party Republicans arrived in Washington seven years ago with a clear, loud message from angry voters: Slash spending. But once again, spending is going way up.

“Part of our job right now [is] that we keep pounding that Republicans still stand for fiscal responsibility,” said Rep. Mark Walker, R-N.C., who chairs the House Republican Study Committee, a coalition of conservatives.

But he was on the losing side as the House early Friday cleared a massive two-year spending package that President Donald Trump quickly signed into law. Sixty-seven Republicans voted against the two-year budget plan that became law Friday, but 167 voted yes.

The bill could add as much as $320 billion to the debt over the next 10 years, according to the Congressional Budget Office, and push the fiscal 2019 deficit past $1.2 trillion, according to the nonpartisan Committee for a Responsible Federal Budget, a research group. The deal included about $100 billion in offsets, not enough to assuage many conservatives.

It was one of the biggest deficit-busters since the 2009 economic stimulus plan that spent nearly $800 billion as the nation reeled from the Great Recession of 2007-09. Since then, other budget bills have been approved by familiar Republican-Democrat coalitions, with tea party loyalists usually opposed.

What stings this time is that for the first time since 2007, Republicans have controlled the House, Senate and White House for the past year.

Yet the Friday vote “represented one of the final frontal charges on spending, and conservatives lost,” said Rep. Mark Sanford, R-S.C., who has long railed against ballooning deficits.

Their solution is simple and the same as it’s been for years: Elect more of us, insists Jenny Beth Martin, president of Tea Party Patriots.

That won’t be easy. Rep. Robert Pittenger, R-N.C., has been targeted by the tea party in the past and once again faces a challenge from the right this year. He insisted he “stood with Trump and the troops” with his yes vote Friday.

“We really don’t have an option,” Pittenger said. “We’ve got sailors and servicemen and women out there. We’ve not provided for them the way they should be. We’ve had accidents needlessly, not enough training hours. You can’t assume the world is going to wait on us.”

The spending bill includes increased defense and domestic spending and funding for disaster relief, the opioid crisis, community health centers and infrastructure, a grab bag intended to secure votes from lawmakers in both parties.

His vote opened him up to an attack by his primary opponent, who blasted the spending package as a burden on future generations.

“Every day when I meet with voters, I hear a consistent message, ‘Enough is enough! It’s time for Republicans to start acting like Republicans again,’” said Republican Mark Harris, a former Charlotte pastor who is challenging Pittenger in the May primary.

Harris asked supporters to “send a message to the Washington establishment that we will not sit by and watch them continue to spend our country into bankruptcy.”

More broadly, fiscal conservatives worried about the message the vote is sending about the Republican Party’s commitment to their principles.

“What exactly is it that Republicans stand for today?” asked Sanford, who voted against the spending bill, describing it as “atrocious” in a social media post outlining his opposition. He said another lawmaker suggested to him that “if we lose the House next year, I think this will be a significant part of it.”

Sanford was elected to Congress in a 2013 special election after serving in the House in the 1990s. As governor of South Carolina from 2003 to 2011, he famously refused stimulus money for the state and has long called rampant federal spending the biggest security threat to the nation.

What comes next for conservatives who want to slow spending is “guerrilla warfare,” Sanford said, but he acknowledged he doesn’t know yet know what that will entail. Republicans complained that the party talks a good game when they’re not in charge, but doesn’t deliver when they are.

“This is not what the American people sent us here to do,” declared the House Freedom Caucus, chaired by Rep. Mark Meadows, R-N.C.

The caucus consists of roughly three dozen of the House’s most conservative members. Since the 435-member House has 238 Republicans, and 218 votes are usually needed to pass legislation, the Freedom Caucus is strong enough to derail GOP-backed legislation if most Democrats are opposed.

Many caucus members were first elected in the tea party year of 2010, riding the wave of the grassroots movement that pledged a more fiscally responsible, streamlined government. Instead, the new members saw GOP lawmakers joining Democrats time after time to approve budgets that did little to achieve tea party aims.

Meadows’ coalition is being buoyed by angry movement conservatives outside the Capitol. Americans for Prosperity called the spending bill “a betrayal of American taxpayers and a display of the absolute unwillingness of members of Congress to adhere to any sort of responsible budgeting behavior.”

The battle over spending will proceed on several fronts in the coming months. Congress has to approve more government funding after March 23 and Trump is expected to propose a massive infrastructure plan.

“It’s going to be very, very difficult to make any big investments in infrastructure after the tax bill and this spending bill,” Bixby said. “It might force them to do something responsible and pass a bill that is paid for, but there’s not been the willingness to do that.”

The tea party arguments will be familiar. But so, it appears, the outcome will be too —little fiscal restraint.

Alex Daugherty and Emma Dumain contributed to this report.