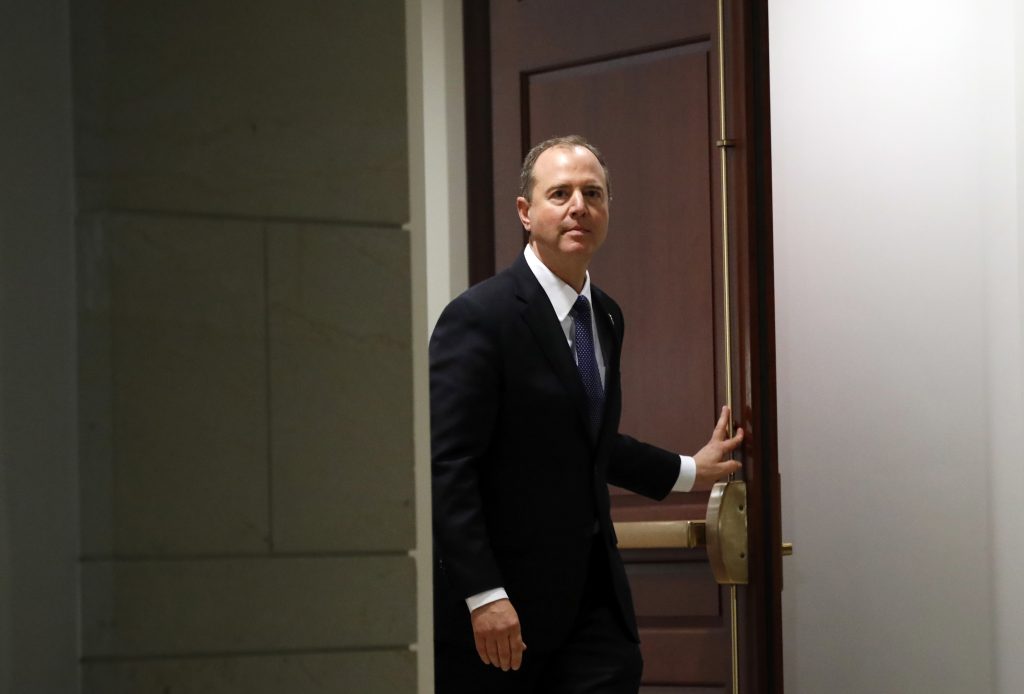 Democrats on the House Intelligence Committee are prepared to black out parts of their memo about the FBI’s Russia investigation to ensure there’s no harmful spilling of secrets, then try again to get President Donald Trump to let it come out. A White House aide said Sunday he’s confident it will be released once Democrats “clean it up.”

That possible nudge toward progress came as both sides traded steamy recriminations over the matter.

Rep. Adam Schiff, senior Democrat on the House Intelligence Committee, said Trump is putting his personal interest above the country’s in blocking a memo that “completely undermines his claim of vindication” in special counsel Robert Mueller’s continuing investigation of the 2016 Trump campaign’s relationship with Russian interests and Russia’s meddling in the election. “The president doesn’t want the public to see the underlying facts,” Schiff said on CBS’s “Face the Nation.”

The White House legislative director, Marc Short, countered that Democrats padded their memo with sensitive information, knowing Trump would stop its release, in an effort to make him look obstructionist.

“We’re not afraid of transparency,” Short said on NBC’s “Meet the Press.” ”I think you’re going to see us release the memo.”

Trump overrode strong Justice Department objections when he declassified a Republican memo alleging an abuse of surveillance powers in the FBI’s Russia investigation. The FBI expressed “grave concerns” about the memo’s accuracy and the Justice Department said in advance that its release, without proper review, would be “extraordinarily reckless.”

But Trump has blocked the Democratic document, which tries to counter the Republican allegations of surveillance excesses. The president has the authority to keep such information under wraps, and exercised it only against the Democrats.

“Their goal here is to put the FBI on trial, to put Bob Mueller’s investigation on trial, and the president is only too happy to accommodate,” Schiff said.

He said Democrats showed the memo to the Justice Department and the FBI and asked for their feedback before bringing it to the intelligence panel, and did not hear complaints that it is inaccurate. But he said Democrats will “sit down with the FBI and go through any concerns that they have” about the disclosure of classified intelligence. “We will redact it to make sure that we’re very protective of sources and methods,” Schiff said.

In their memo, Republicans challenged how the FBI and Justice Department used information from former British spy Christopher Steele in obtaining a secret warrant to monitor Carter Page, who advised the Trump campaign on foreign policy. The memo alleges the FBI and Justice Department didn’t tell the court enough about Steele’s anti-Trump bias or that his work was partly paid by Hillary Clinton’s campaign and the Democratic National Committee. Republicans argued that the reliance on Steele’s material politicized the government’s surveillance powers.

Democrats said that memo “cherry-picked” details. They noted federal law enforcement officials had informed the court about the political origins of Steele’s work, some of his information was corroborated by the FBI and other evidence was used to get the warrant. The Democratic memo is thought to elaborate on those points.

Short, though, said Democrats also introduced political theater into the episode. “We believe that Congressman Schiff potentially put in there methods and sources that he knew would need to be redacted,” he said. “And if we redacted it, then there would be an outcry that said the White House is trying to edit it. So we said take it back, work with the FBI, clean it up, and we’ll release it.” Asked if Democrats drafted a memo they knew would be blocked, Schiff said “of course not.”