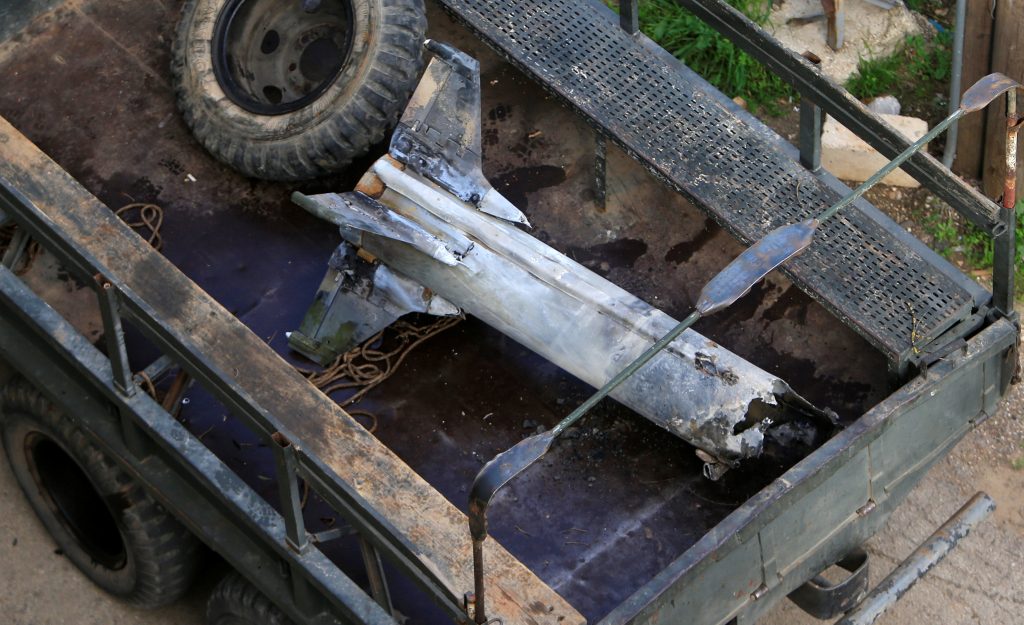 Two Israeli pilots were in Rambam Hospital in Haifa, one in serious condition, after a chain of events Shabbos morning that significantly increased tension on Israel’s northern border. The incident was set off early Shabbos when an Iranian drone entered Israeli airspace, with Israel responding and setting off a battle that resulted in significant losses for Syria and Iran in Syrian territory.

Early Shabbos, an Iranian drone was detected over Israeli airspace in the Golan Heights. The IDF shot down the drone, and dispatched a battery of planes to attack the Tadmor air base in Syria, where the drone was dispatched from, as well as several other targets in Syria. The Israeli planes were met with a barrage of missiles fired by Syria, one of which hit an F-16 jet that had a crew of two. The two pilots ejected themselves from the plane over Israeli territory, and were quickly taken to the hospital by rescue forces. Parts of the destroyed Israeli plane were found in Lebanon, Syria and Jordan.

Meanwhile, Israeli planes continued their attack on Syrian and Iranian targets in Syria. According to Channel Two, the IDF destroyed about half of Syria’s air power in the counterattack. Most of the missiles fired at the Israeli planes were of Russian manufacture, the IDF said Motzoei Shabbos, with the missile that hit the Israeli fighter jet an older version of a missile. In the Israeli counterattack, IDF planes destroyed several key Syrian missile systems, including new SA-17 systems just recently delivered by Russia.

Israeli officials also emphasized that the fact that Hezbollah did not get involved in Shabbos’s events showed that Israeli policy in the north was working. In a statement, Hezbollah said that while it was not involved in Saturday’s incident, it “represented a new strategic era in the region.” Iran denied that a drone even entered Israeli airspace or was shot down by Israel, calling the notion “ridiculous.” Israel’s attack on Syria’s military bases, however, would not go unanswered. “From now on any attempt by Israel to attack in Syria will be answered with a strong response.”

In a statement Motzoei Shabbos, Prime Minister Binyamin Netanyahu said that “our policy is clear, we will continue to defend ourselves against all aggression. We will respond to any attempt to violate our sovereignty. Iran attempted such a violation today. The Israeli Air Force shot down the drone dispatched by the Iranians and damaged the base that sent it. Israel also hit several Iranian and Syria targets that have been acting against us. This is our right and responsibility, and we will continue to do whatever is necessary – let no one be mistaken about this.”

Netanyahu added that he had discussed the matter with Russian President Vladimir Putin, “reminding him of our rights and responsibilities to defend ourselves against attacks from Syria. We agreed that we would continue to coordinate and discuss security matters. I also spoke with Secretary of State Rex Tillerson about today’s events, and other recent events in our region. I wish to emphasize that we seek peace, but we want to make clear that we will not tolerate the expansion of Iranian activity in Syria or anywhere else.”

In a statement, the United States said Saturday night that it had no involvement in the incident, but that it supported Israel’s right to defend itself.

“The United States is deeply concerned about today’s escalation of violence over Israel’s border and strongly supports Israel’s sovereign right to defend itself,” said State Department spokeswoman Heather Nauert. “Iran’s calculated escalation of threat and its ambition to project its power and dominance, places all the people of the‎ region – from Yemen to Lebanon – at risk.”‎