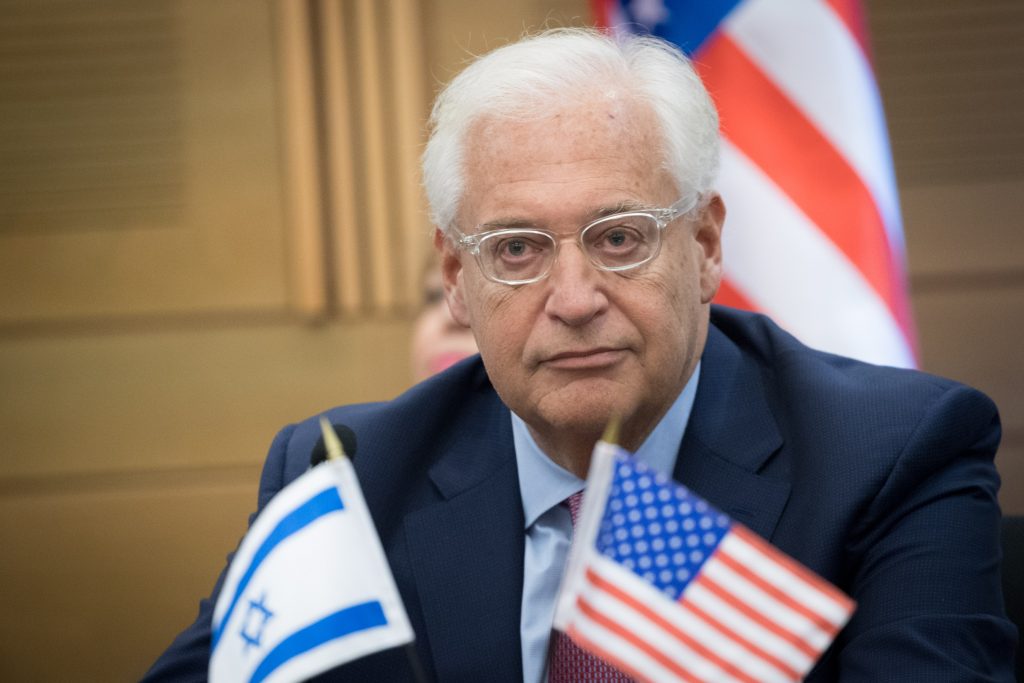 U.S. Ambassador to Israel on Friday slammed far-left Haaretz columnist Gideon Levy for his comments on the terrorist attack in Shomron this week, in which Rabbi Itamar Ben-Gal, Hy”d, of Har Bracha was murdered. Levy called the town “Har Klalah,” “mountain of curse,” as opposed to “mountain of blessing,” the English translation of Har Bracha – and this raised the ire of Ambassador Friedman, who slammed Haaretz and Levy.

“What has become of Haaretz,” Ambassador Friedman rhetorically asked in his social media post. “Four young children are sitting shivah for their murdered father, and this publication calls their community a ‘mountain of curse.’ Have they no decency?”

The ambassador’s comments were prompted by a response of Levy to the previous social media post of Friedman, who said that he had donated an ambulance to Har Bracha 20 years ago “hoping it would be used to deliver healthy babies. Instead, a man from Har Bracha was just murdered by a terrorist, leaving behind a wife and four children. Palestinian “leaders” have praised the killer. Praying for the Ben-Gal family.”

Commenting on this, Levy wrote that while Friedman could donate what he wanted to whom he wanted, “his donations represent a political point of view, as well as a moral stance. All that is missing here in the land of schnorrers is an ambulance for Har Bracha – as if the excessive budgets these settlements already get are not enough, as if Har Bracha would not have an ambulance without Friedman. With or without Friedman’s ambulance, Har Bracha is actually Har Klalah. It, like its sister settlements, was established just as a poke in the eyes of Palestinians and to prevent a peace agreement.”

Rabbi Ben-Gal was killed Monday afternoon at the entrance to Ariel, a city in central Samaria. Rabbi Ben-Gal had been waiting at a bus stop, and his murderer, Abd Al Hakim Adel A’asi, had just gotten out of a taxi. He crossed the highway and attacked Rabbi Ben-Gal using two knives he was holding, stabbing his victim in the upper body. Rabbi Ben-Gal, realizing what had happened, ran away, pursued by the terrorist. He managed to signal to a bus driver that he had been stabbed, and when the driver got off the bus and security officials began pursuing him, the terrorist ran in the other direction.

An IDF officer saw him running with the knives in his hand, and used his vehicle to slam into the terrorist. He knocked the terrorist down, but he managed to get up. The officer knocked the terrorist down again, but again he got up, and he eventually disappeared into the village of Kifl Haris, which is located across the road from Ariel. The officer was unarmed, security officials said. The search for Adel is ongoing, focused on central Shomron and Shechem.