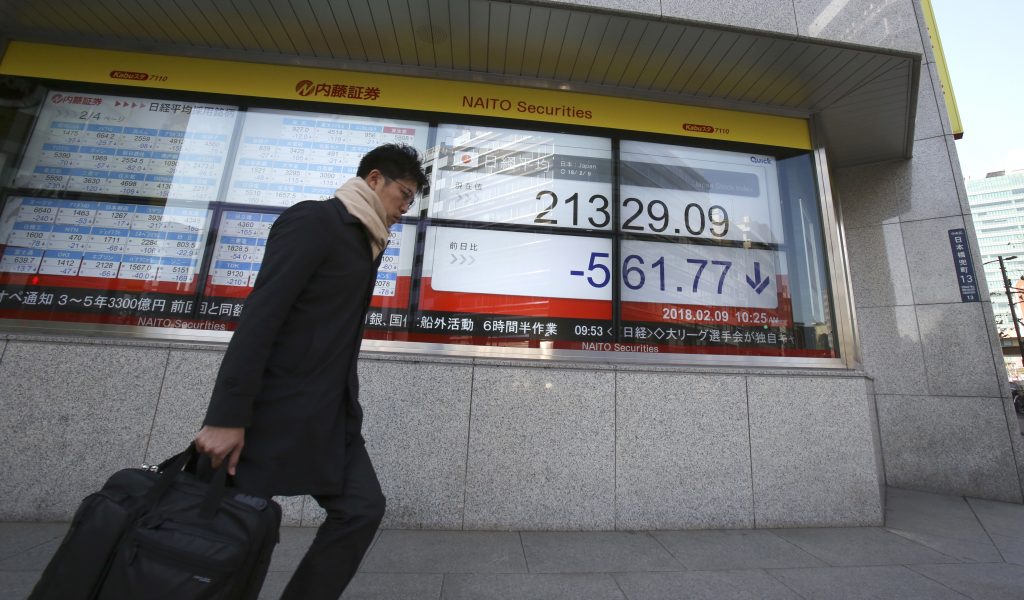 A 4 percent drop in Chinese shares dealt reeling world stock markets a fresh blow on Friday, as nerves about rising borrowing costs and soaring volatility put them on course for their worst week since the height of euro zone crisis.

European bourses saw relatively minor early losses but China’s overnight plunge had gouged at confidence again after the second 1,000 point loss of the week for the Dow Jones Industrial had sent it into official correction territory.

Capital flow figures also showed a record $30 billion had already been yanked out of stocks during the rout, though even after that, Bank of America’s closely followed “Bull & Bear” indicator was still flashing red and warning investors to sell.

“After the moves earlier this week market investor sentiment is fragile and because of this we aren’t expecting the markets to immediately start moving higher once again,” said J.P. Morgan Asset Management Global Market Strategist Kerry Craig.

“But given that U.S. markets are now in correction territory – with a 10 percent drop since the market peak in January – it’s likely that the most severe gyrations will hopefully have passed,” he added as U.S. futures turned higher.

There was limited reaction as the U.S. government staggered into another shutdown after lawmakers failed to meet a funding deal deadline, but it did play into many of the overarching market concerns that have taken hold this month.

The yield on benchmark 10-year U.S. Treasuries, which tends to be the driver of global borrowing costs, was hovering at 2.86 percent just short of both Thursday peak and Monday’s four-year high of 2.885 percent.

Europe’s mainstay – German Bunds – were barely budging too at 0.70 percent, as their recent rise in yields left them flirting with another weekly rise, which would mark their longest run of weekly gains in 16 years.

Higher yields are seen hurting equities as they increase loan costs for companies and ultimately consumers. They also present an alternative to investors who may reallocate some funds to bonds from equities.

On top of pressure from the drop in global shares, Chinese equities had also been hurt by traders closing positions ahead of the Lunar New Year holidays which begin next week.

The Shanghai Composite Index had tumbled as much as 6.0 percent to its lowest since May 2017, and the blue chip CSI300 index dived as 6.1 percent.

Both indexes had pruned the losses to just over 4 percent by the time they closed, but it was still their largest single-day losses since February 2016.

Japan’s Nikkei had also shed 2.3 percent, en route to a weekly loss of 8.1 percent – its biggest since February 2016 too.

For MSCI’s broadest index of world shares, the 47-country ACWI the slump was 6.2 percent, which as long as it is still more than 6.1 percent when U.S. markets close later will be the biggest loss since September 2011.

At that point markets where being slammed by worries about Greek debt default and a collapse of the euro zone. The Federal Reserve was also starting one of its mass bond buying programmes.

“The correction phase in equities could last through February and possibly into March,” said Masahiro Ichikawa, senior strategist at Sumitomo Mitsui Asset Management in Tokyo.

In currencies, the dollar edged up 0.2 percent to 108.985 yen, after slipping 0.5 percent overnight. For the week, it was on track to lose 1.5 percent against its Japanese peer amid risk aversion in broader markets.

The Swiss franc dipped 0.2 percent to 0.9383 franc per dollar after advancing about 0.7 percent the previous day, while the euro was on course for its worst week against the dollar since October as it nudged up to $1.2271..

As well as the all the global market uncertainty, there are signs supplies could be going up again after Iran announced plans to increase production and data showed U.S. crude output hitting record highs.

Metals took another mauling too. Bellwether industrial metal copper < CMCU3> was on course for its worst week of the year so far having dropped back below the $7,000 a tonne mark that had become something of a support crutch.