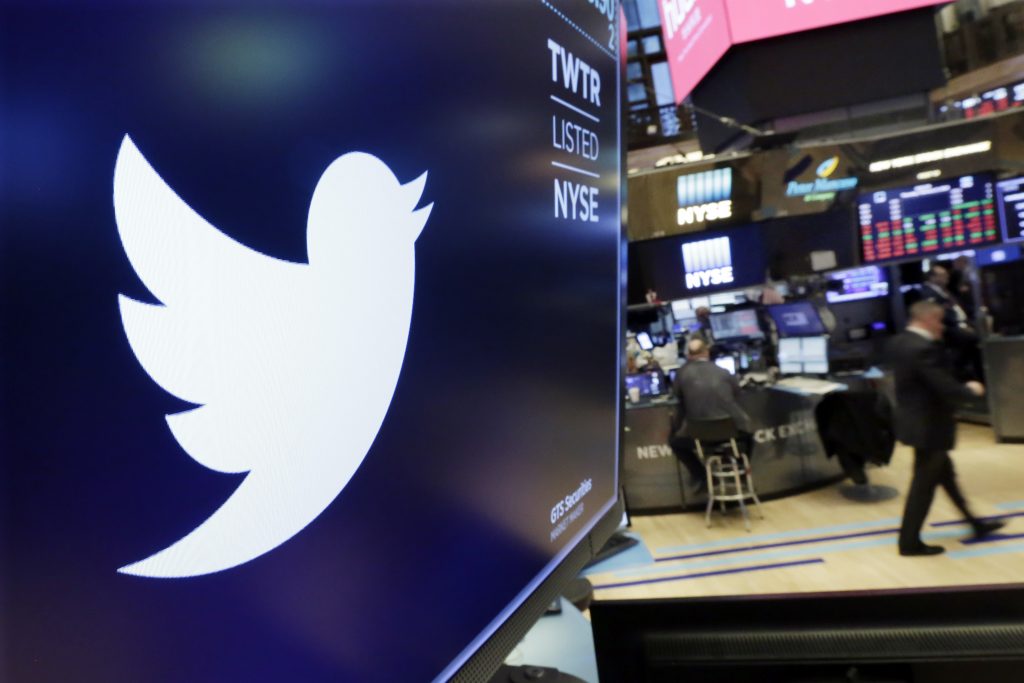 Twitter made money for the first time in its nearly 12-year history, a milestone that satisfied investors in the short term but might not resolve the company’s broader problems any time soon.

The company is still struggling to get people to sign up, despite the attention President Donald Trump’s no-holds barred tweets have drawn to the service. One problem: Anyone can read tweets without signing up. As a result, Twitter’s user base pales compared with other social media.

And that means fewer advertising opportunities.

Beyond that, Twitter has been dealing with policing hate speech and abusive comments, fake accounts and attempts by Russian agents to spread misinformation. Every time Twitter tries to respond to a problem, it’s either not good enough, or some other problem emerges.

“They are playing whack-a-mole with these problems,” said Michael Connor, whose Open Mic group helps investors push tech companies to address privacy, abuse and other issues. “They say they have the problem under control, but they don’t know what the problem is exactly.”

Add to that a revolving door of executives, including an influential chief operating officer leaving after Thursday’s earnings report.

Twitter said it had an average of 330 million monthly active users in the final three months of last year, unchanged from the previous quarter and below Wall Street’s estimate of 333 million.

Twitter hadn’t turned a profit until now because —it didn’t attract enough advertising revenue to make up for its expenses. But it’s been cutting costs and focusing on new revenue streams, such as live video.

In some good news, the company grew revenue by 2 percent to $732 million in the final three months of 2017. That’s above the $687 million that analysts polled by FactSet were expecting. Its net income — a first — was $91 million, or 12 cents per share. Adjusted earnings were 19 cents, above analysts’ expectations of 14 cents.

After the results came out, the company’s stock jumped more than 17 percent in morning trading to $31.64, its highest level since 2015.

The quarter “was a breath of fresh air for investors that have patiently awaited for this turnaround story to manifest after years of pain,” said Daniel Ives, head of technology research at GBH Insights.

Nonetheless, Twitter has big challenges ahead. Connor said that while investors don’t want to micromanage Twitter, they at least want the company “to show that there is a level of management and governance on the senior level in place willing to address these issues.”

While Twitter is well-known, it remains difficult to use, making it difficult for the company to explain to people why they need it. Twitter also has an “image problem,” Wedbush analyst Michael Pachter said in a recent research note, “as it has been slow to act on harassment and other hostile behavior.”

The company has enacted a slew of new policies, and Pachter says this renewed focus should help. But enforcing them will be a bigger hurdle.

Connor’s group recently helped two large social media shareholders file resolutions asking the companies to take more responsibility for fake news, abuse and hate speech. The companies have not formally responded, though Twitter has introduced a slew of new measures to weed out abusive account and has said that it “cares deeply” about misinformation and its harmful effect on civic discourse.

Then there’s the issue of automated accounts made to look like real people. In the days after a New York Times report on the “shadowy global marketplace” of brands and celebrities buying fake retweets and followers, prominent Twitter users collectively lost more than a million followers, suggesting that Twitter either didn’t know or didn’t act until the expose.

Fake accounts aren’t a new problem. Last June, Twitter said it has been “doubling down” on its efforts to weed out such accounts by “expanding our team and resources, and building new tools and processes.” It estimates that less than 5 percent of monthly active users are fake. But the Times referenced a report saying it could be as high as 15 percent.

One chief problem: More fake accounts keep popping up, and those behind them are getting smarter, so Twitter’s countermeasures haven’t made much of a dent.

Forrester Research analyst Erna Alfred Liousas said that while rival social networks deal with fake accounts, too, it may be “more elevated for Twitter” because there has been so much focus on its monthly user numbers. Anything that could jeopardize advertisers’ ability to see how many people they will reach, she said, “is going to cause concern.”

Another concern: Last month Chief Operating Officer Anthony Noto announced his resignation from the company, following Thursday’s earnings report. Noto, who was also finance chief until last July, has served an influential and important role at the company and had led its venture into live video. Twitter said it is not replacing Noto, and instead will split his duties between executives.

Twitter has “less than Jack’s undivided attention,” Pachter said, adding that nonetheless Dorsey runs the company with a “benevolent autocracy” that leaves little room for innovation.

By contrast, Pachter said Facebook CEO Mark Zuckerberg “is not afraid if they alter his baby, his invention, to make it better,” even if in the end Zuckerberg may be the final arbiter.

Twitter declined to comment. But Dorsey said at a conference late last year that it’s “not about the amount of time I spend at one thing but how I spend the time and what we’re focused on.”