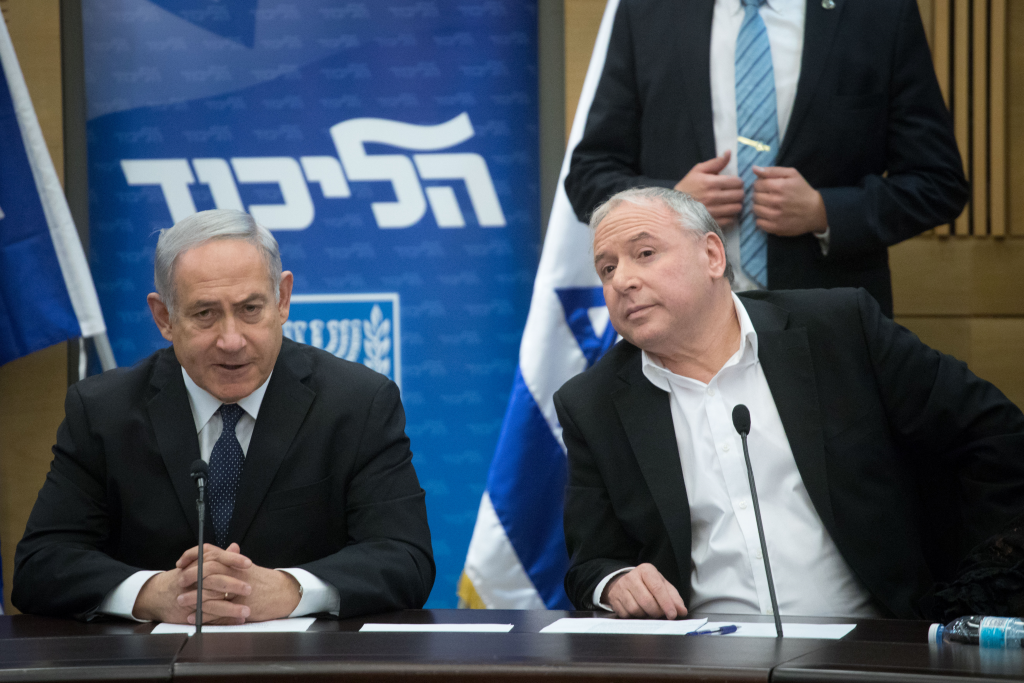 Open warfare between Israeli Prime Minister Binyamin Netanyahu and Chief of Police Roni Alshich escalated late Thursday as the PM called for an immediate investigation to determine whether there was any truth in the latter’s charge that people were hired to harrass investigators of Netanyahu.

“There is no personal attack here, not on the police commissioner and not on anyone else,” the prime minister wrote in an online comment. “The real question is the integrity of the investigation, and the only way to clarify this is through an objective, independent and quick investigation.”

Later, in the evening, coalition chairman MK David Amsalem (Likud) entered the fray, with perhaps the most inflammatory remark heard yet: “This is an attempted coup by the police. They see the Prime Minister as a personal enemy and are trying to topple him.”

In an interview on Army Radio, Amsalem went after Alshich personally, saying the chief was “full of himself,” and that he can’t remember a police commissioner or chief of staff ever saying such things. “It shocked me. I thought he was running in some primaries,” said Amsalem.

Amsalem was referring to an interview Alshich gave on Wednesday night, in which he said: “There is pressure on people working on these investigations; there are people circling around these investigators, sniffing around in order to collect information about these officers.”

He said that “questions were being asked about these investigators, including talking to their neighbors, and we know that the people doing this are professionals,” said Alshich.

“There was a mischievous glint in Alshich’s eyes when he promised that ‘many will be surprised’ when the police recommendations are published,” wrote Haaretz.

In response to that, he questioned the integrity of the investigation: “A great shadow has fallen tonight on police investigations and on their recommendations in the matter of Prime Minister Netanyahu,” said Netanyahu. “Any decent person would ask himself how people who say such delusional things about the prime minister can objectively investigate him and give impartial recommendations.”

Opposition politicians have chimed in as well. Zionist Camp leader Avi Gabbay said that “the Prime Minister is behaving like a common criminal, with an unprecedented attack on the commissioner and the entire police force. Netanyahu is humiliating us, the citizens of Israel. The assault on the commissioner is illegitimate. Instead of asking for a speedy end to the investigation, Netanyahu elects to attack the police commissioner, thereby dismantling any faith citizens have in our legal system.”

Meretz leader Zehava Galon said that if the police recommend indicting Netanyahu, he would have to recuse himself until the Attorney General decides whether to prosecute him. She said that, if he doesn’t do so, she would suggest to opposition members to boycott all Knesset sessions and “not allow Netanyahu to defile public life,” as she put it.

The law does not require a prime minister to resign unless he is convicted of a crime. There has been relentless pressure on the Netanyahu to resign due to the allegations against him, in the event that an indictment is filed by Attorney General Avichai Mandelblit.

against him, in the event an indictment is filed by Attorney General Avichai Mandelblit.

Defense Minister Avigdor Lieberman later weighed in on Netanyahu’s side, saying that “Alshich needs to focus on eradicating crime, not in interviews to the media.”

The entire discussion was out of place, he said.

“I was sorry to see this entire spectacle, the exchange of blows in the media. Each person needs to do what he has been tasked with, without a lot of PR.”

Liberman added, “Any person is innocent unless proven otherwise; the presumption of innocence applies to all. The only body authorized to determine whether a person is guilty or innocent is the court. The rest of it is just needless politics.”