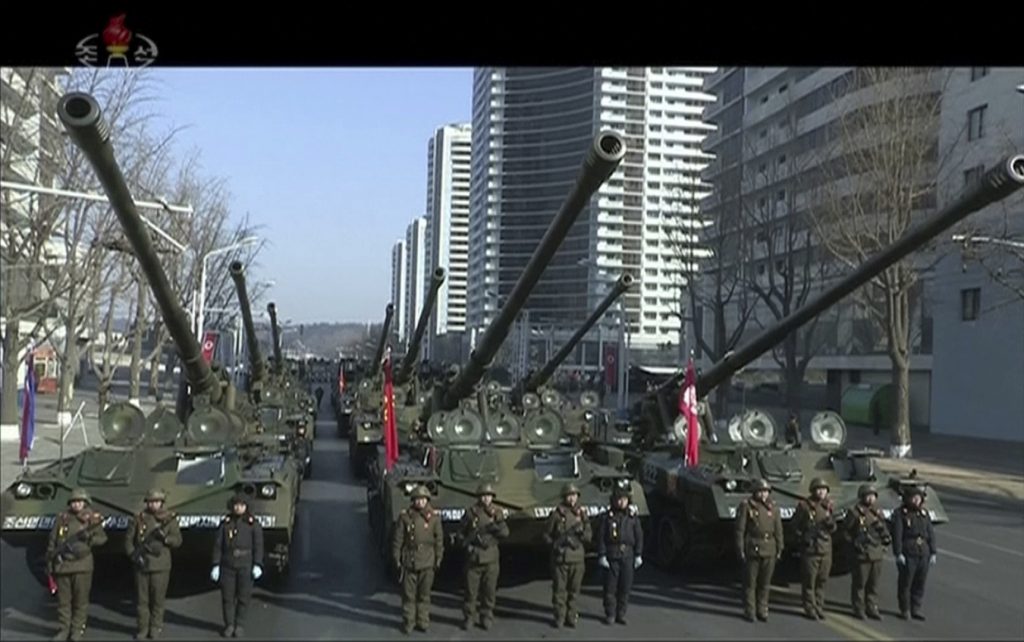 North Korean leader Kim Jong Un presided over an extravagant military parade in Pyongyang’s Kim Il Sung Square on Thursday, grabbing the spotlight on the eve of the Pyeongchang Winter Olympics in South Korea to thumb his nose at Washington while making a point of showing off his new-found restraint toward Seoul.

The parade itself had been anticipated for weeks.

North Korea announced last month that it would hold a big event to mark the 70th anniversary of the founding of its military.

But instead of broadcasting the morning event live, North Korean media aired an edited version later in the day, giving it a somewhat lower profile than expected. The parade was also shorter and featured fewer missiles than the previous one, which was held in April last year and unveiled five new kinds of missiles — surprising analysts and generating headlines worldwide.

This time, Kim fine-tuned his more fiery rhetoric toward Washington.

Addressing tens of thousands of troops and civilians assembled on the square below him, Kim said the parade marks North Korea’s emergence as a “global military power” despite facing the “worst sanctions.” He called for his military to maintain a high level of combat readiness against the United States and its followers to keep them from infringing upon “the republic’s sacred dignity and autonomy even by 0.001 millimeters.”

He made no mention of the Olympics in the parts of his speech that were broadcast. It was unclear whether the North showed the entirety of his speech during the recorded coverage of the parade.

The tone was in line with Kim’s bigger strategy of late.

He has been making a major diplomatic push toward South Korea since he announced a last-minute proposal to send a delegation of athletes and officials to the Olympics during his annual New Year’s address.

The moves have been generally welcomed in the South.

Even as the missiles were rolling by his viewing stand, South Korean officials announced that Kim’s younger sister, due to attend Friday’s opening ceremony, will have a luncheon with South Korean President Moon Jae-in. That in itself is a major breakthrough for the Koreas. Kim Yo Jong is one of Kim Jong Un’s closest confidants and she will be the first member of the Kim family to visit the South.

Kim’s two-pronged strategy has put the United States in an odd position.

Vice President Mike Pence arrived in South Korea on Thursday vowing to send a strong message to the North that it must abandon its nuclear weapons. But that message may seem a bit off-key to many South Koreans who are more open to see the North’s recent moves as a positive step, though by no means a final solution, and are at times vociferously wary of American meddling.

Though possibly best known for their legions of goose-stepping troops, North Korean military parades are the country’s primary means of showing off its most recent advances in military technology — sometimes with aspirational mock-ups.

Kim, dressed in a long black winter coat, was shown walking on a red carpet with his wife at the beginning of the event, which began with thousands of goose-stepping troops lined up in Kim Il Sung Square to form giant slogans. Virtually all foreign media were excluded from the event.

Though fewer in number, all of the basic components were brought out again on Thursday.

One of the North’s ICBMs — the Hwasong-15 — was wheeled out along with a variety of other missiles, including a Hwasong-12 mid-range missile, which the North flew over Japan twice last year.