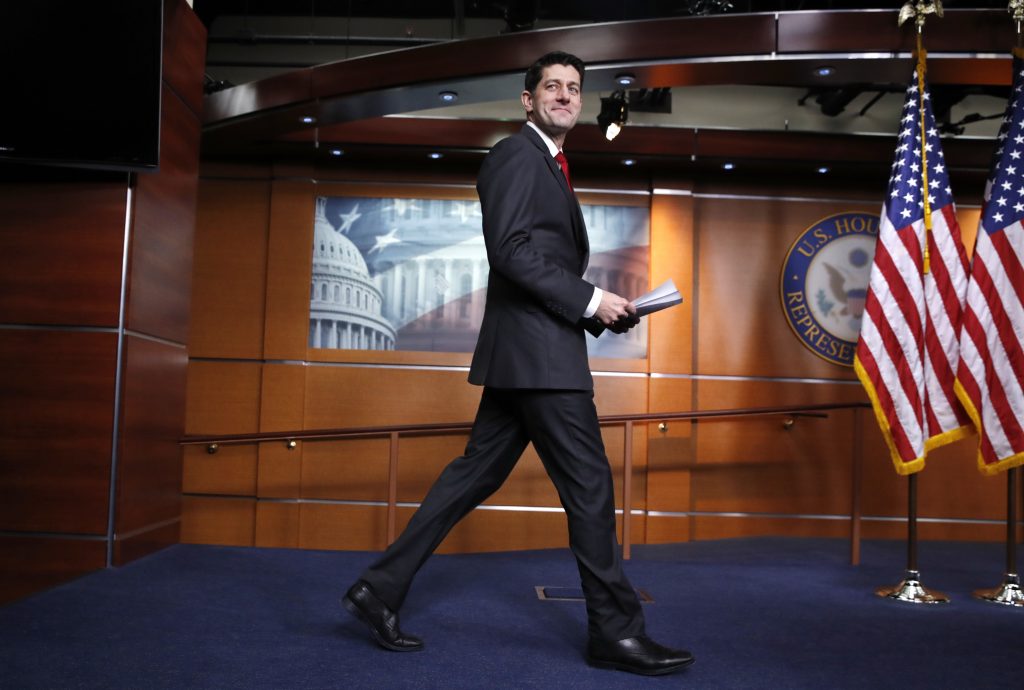 Lawmakers pushed to enact a massive budget deal Thursday along with a stopgap temporary measure to prevent a government shutdown at midnight. GOP leaders tried to shore up support among conservatives for a plan that would shower the Pentagon with the billions they favor but also balloon the deficits they despise.

“It’s going to need bipartisan support. We are going to deliver our share of support,” House Speaker Paul Ryan, R-Wis., told conservative radio host Hugh Hewitt. “Our members who are focused on the military are very happy where we landed with that.”

The measure was a triumph for Republican allies of the Pentagon and for Democrats seeking more spending on infrastructure and fighting opioid abuse.

But it represented a bitter defeat for many liberal Democrats who sought to use the party’s leverage on the budget to resolve the plight of immigrant “Dreamers” who face deportation after being brought to the U.S. illegally as children. The deal does not address immigration. And some tea party Republicans shredded the measure as a budget-buster.

Beyond the $300 billion figure for the military, the agreement adds $89 billion in overdue disaster aid for hurricane-slammed Texas, Florida and Puerto Rico, a politically charged increase in the government’s borrowing cap and a grab bag of health and tax provisions. Cotton growers and dairy farmers would get relief courtesy of the bipartisan leadership of the Senate Appropriations Committee, while popular funding for community health centers would be extended for two years, among myriad health provisions.

“I love bipartisanship, as you know,” said Sen. Jeff Flake, R-Ariz. “But the problem is the only time we discover bipartisanship is when we spend more money.”

Senate leaders pressed to approve the measure Thursday and send it to the House for a confirming vote before the government begins to shut down at midnight.

While Senate Democrats celebrated the rare moment of bipartisanship — Minority Leader Chuck Schumer called it a “genuine breakthrough” — progressives and activists blasted them for leaving immigrants in limbo.

Top House Democrat Nancy Pelosi of California, herself a key architect of the budget plan, announced her opposition Wednesday morning and mounted a remarkable daylong speech on the House floor, trying to force GOP leaders in the House to promise a later vote on legislation to protect younger immigrants whose protection against deportation under former President Barack Obama’s Deferred Action for Childhood Arrivals program, or DACA, will expire next month.

Trump himself tweeted that the agreement “is so important for our great Military,” and he urged both Republicans and Democrats to support it.

But the plan faced criticism from deficit hawks in his own party.

Combined with the party’s December tax cut bill, the burst in military and other spending would put the GOP-controlled government on track for the first $1 trillion-plus deficits since President Barack Obama’s first term and the aftermath of the most recent recession nine years ago.

“This budget deal shows just how broken the budget process is, that Congress thinks the only way to agree to a budget is to put hundreds of billions of dollars on the nation’s credit card,” said Maya MacGuineas, president of the Center for a Responsible Federal Budget, a Washington-based group that advocates for fiscal discipline.

Sen. Bob Corker, R-Tenn., said the measure amounts to “doubling down on the irresponsible mentality in Congress of spend-now-pay-later.”

The deal contains far more money demanded by Democrats than had seemed possible only weeks ago, including $90 billion in disaster aid for Florida and Texas. Some other veteran Democrats — some of whom said holding the budget deal hostage to action on Dreamer immigrants had already proven to be a failed strategy — appeared more likely to support the agreement than junior progressives elected in recent years.

“We’re not going to get DACA as part of this,” said Rep. John Yarmuth of Kentucky, the top Democrat on the Budget Committee. “So if we can negotiate a deal like I think we’ve gotten that essentially meets every other one of our priorities, then I think that’s where a lot of the Democrats are.”

The budget agreement would give both the Pentagon and domestic agencies relief from a budget freeze that lawmakers say threatens military readiness and training as well as domestic priorities such as combating opioid abuse and repairing the troubled health-care system for veterans.

The core of the agreement would shatter tight “caps” on defense and domestic programs funded by Congress each year. They are a hangover from a failed 2011 budget agreement and have led to military readiness problems and caused hardship at domestic agencies such as the Environmental Protection Agency and the IRS.

The $89 billion in disaster aid would bring the total appropriated in the wake of last year’s hurricane season to about $140 billion.

The agreement would increase the government’s borrowing cap to prevent a first-ever default on U.S. obligations that looms in just a few weeks. The debt limit would be suspended through March of 2019, putting the next vote on it safely past this year’s midterm elections.

The 652-page measure was unveiled late Wednesday. It contained previously unmentioned extensions of tax provisions, an array of fee renewals to partly defray the measure’s cost, and almost 400 pages worth of health provisions.