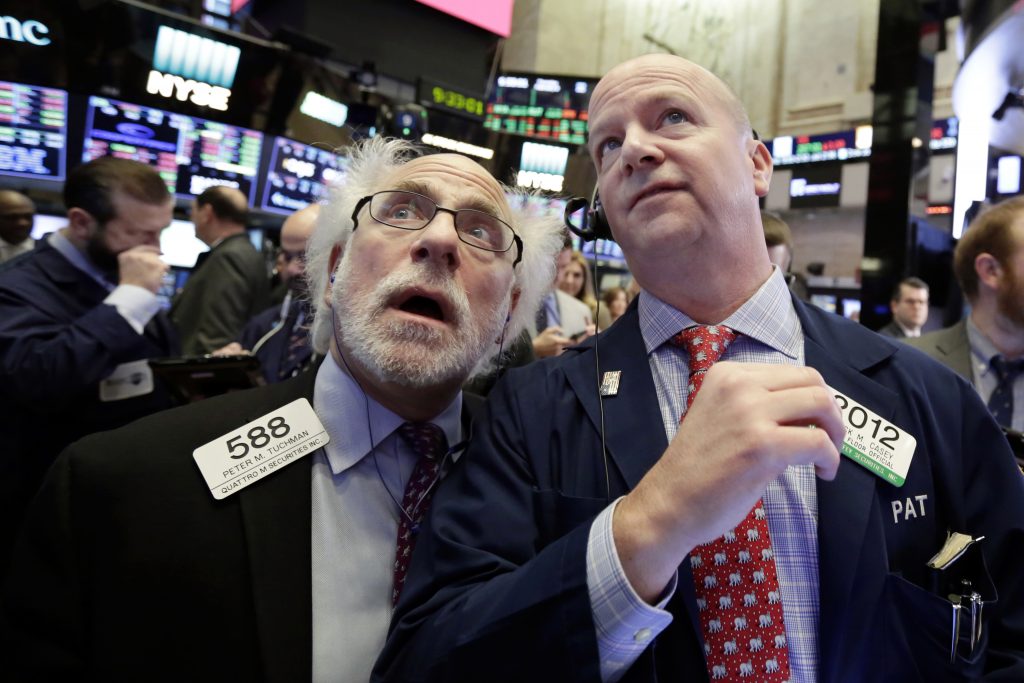 Stocks are sinking again Thursday, extending a streak of losses that has yanked the market away from record highs. The Dow Jones industrial average slumped 600 points. The tumult started last Friday as investors worried about signs of rising inflation.

The market fell steadily as the day wore on and is on track for its fifth loss in the last six days. Technology companies, the leading sector over the past year, and banks fell the most.

The Standard & Poor’s 500 index, the benchmark for many index funds in 401(k) accounts, is now down 8.8 percent from the latest record high it set January 26. It’s still up 15 percent over the past year.

Stock trading turned volatile over the last several days, breaking an unusually long period of calm. European markets were also lower after the Bank of England said it could raise interest rates in the coming months.

After huge gains in the first weeks of this year, stocks tumbled Friday after the Labor Department said workers’ wages grew at a fast rate in January. That’s good for the economy, but investors worried it will hurt corporate profits and that rising wages are a sign of faster inflation. It could prompt the Federal Reserve to raise interest rates at a faster pace, which would act as a brake on the economy.

The losses were broad. Four stocks fell for every one that rose on the New York Stock Exchange, and 10 out of the 11 industry sectors in the S&P 500 index were down.

High-dividend stocks including phone companies fell. Those stocks are often seen as substitutes for bonds because they tend not to fluctuate that much in price and provide steady income. Those stocks fall out of favor when bond yields rise, as they have been for the past few months, and many expect the trend to continue. The yield on the 10-year note was as low as 2.04 percent as recently as September.

The market didn’t get much help Thursday from company earnings reports, several of which disappointed investors. While U.S. companies mostly did well at the end of 2018, a number of them had a weak finish to the year.

Hanesbrands — which makes underwear, T-shirts and socks — reported a smaller profit than investors expected, and its forecast for the current year didn’t live up to analysts’ estimates, either. The stock dropped $2, or 9.1 percent, to $19.96.

IRobot, which makes Roomba vacuums, plummeted 30 percent after projecting a smaller annual profit than Wall Street was expecting. The stock dropped $27.21, or 30.9 percent, to $60.83.

Twitter had a banner day, soaring 16 percent after turning in a profit for the first time. Its fourth-quarter revenue was also better than expected. The stock rose $4.49 to $31.40.

Online delivery company GrubHub soared after it announced a partnership with Yum Brands, the parent of Taco Bell and KFC. GrubHub will provide the delivery people and technology to let people order food from those restaurants. GrubHub jumped $21.44, or 30.7 percent, to $91.34, while Yum Brands dipped $1.22, or 1.5 percent, to $78.91.

Stocks in Europe declined, and bond yields increased after the Bank of England said it could raise interest rates in coming months because of the strong global economy. That also sent the pound higher. Britain’s FTSE 100 fell 1.5 percent, and the French CAC 40 lost 2 percent. Germany’s DAX declined 2.6 percent.