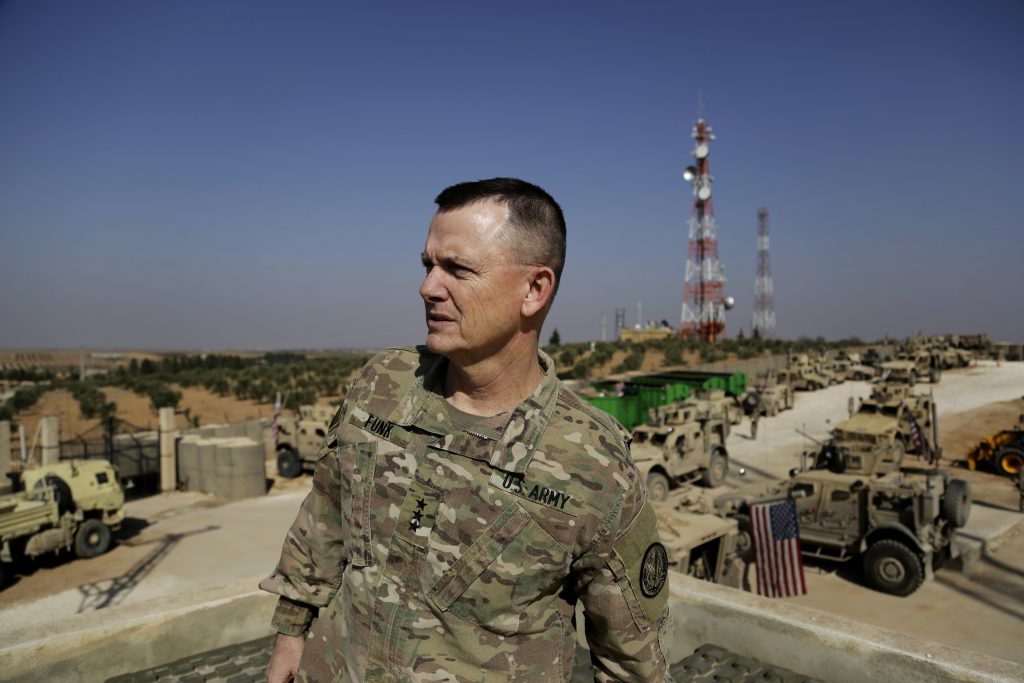 On the ground in Syria, the top U.S. general in the coalition fighting the Islamic State terrorist group pledged on Wednesday that American troops would remain in the northern Syrian Kurdish town of Manbij despite Ankara’s demands for a U.S. pullout.

“We’re here to ensure the lasting defeat of ISIS is maintained in this area,” Lt. Gen. Paul E. Funk said during a visit to U.S. forces in Manbij. ISIS is an alternative acronym for the Islamic State group.

Funk’s visit comes amid rising tensions between Turkey and the United States — NATO allies that have ended up on opposing sides in some aspects of the multi-layered war in Syria.

While fighting IS in Syria, the U.S. has backed the Syrian Kurdish militia, known as the People’s Protection Units or YPG — a group that Ankara considers “terrorists” and allied with Kurdish insurgents within Turkey, the outlawed Kurdistan Workers’ Party, or PKK. The YPG makes up the backbone of a force that fought IS in Syria.

After ousting IS from Manbij in 2016, the United States has maintained a military presence there.

Funk told reporters in Manbij that the U.S. would continue to support the Syrian fighters despite tensions with Turkey and that a continued U.S. presence in Syria’s north is aimed at de-escalating tensions.

“I don’t worry,” Funk said when asked about recent Turkish threats, “It’s not in my job description to worry, my job is to fight.”

On Tuesday, Turkish President Recep Tayyip Erdogan called on the U.S. to withdraw its troops from Manbij and renewed a threat to expand Ankara’s military offensive in Syria to this town.

“Why are you staying there (in Manbij)? Leave,” Erdogan said, referring to American troops. “We will come to return the lands to their real owners.”

On Jan. 20, Turkey launched a cross-border offensive into the northwestern enclave of Afrin to drive out the Syrian Kurdish militia from there and subsequently threatened to extend its operation to Manbij, over 62 miles to the east.

“I’m very confident in the (Syrian Democratic Forces) leadership,” Funk said, referring to the U.S.-backed Syrian forces mostly made up the YPG.

“When nobody else could do it they retook Raqqa,” Funk added, referring to the former capital of the self-proclaimed IS caliphate in Syria. “I think that has earned them a seat at the table.”

The U.S.-backed forces in Syria retook Raqqa last October. The defeat marked a major blow to IS and was followed by a string of swift territorial victories in Syria that retook nearly all the territory the terrorists once held. Pockets of IS fighters, however, remain in eastern Syria between the Euphrates River and the Iraqi border.

American and Syrian Kurdish commanders at the Manbij outpost said that low-level clashes between Turkish-backed forces and the U.S.-backed fighters were a regular occurrence.

But Funk downplayed the significance of the attacks, describing them as just “harassing.”