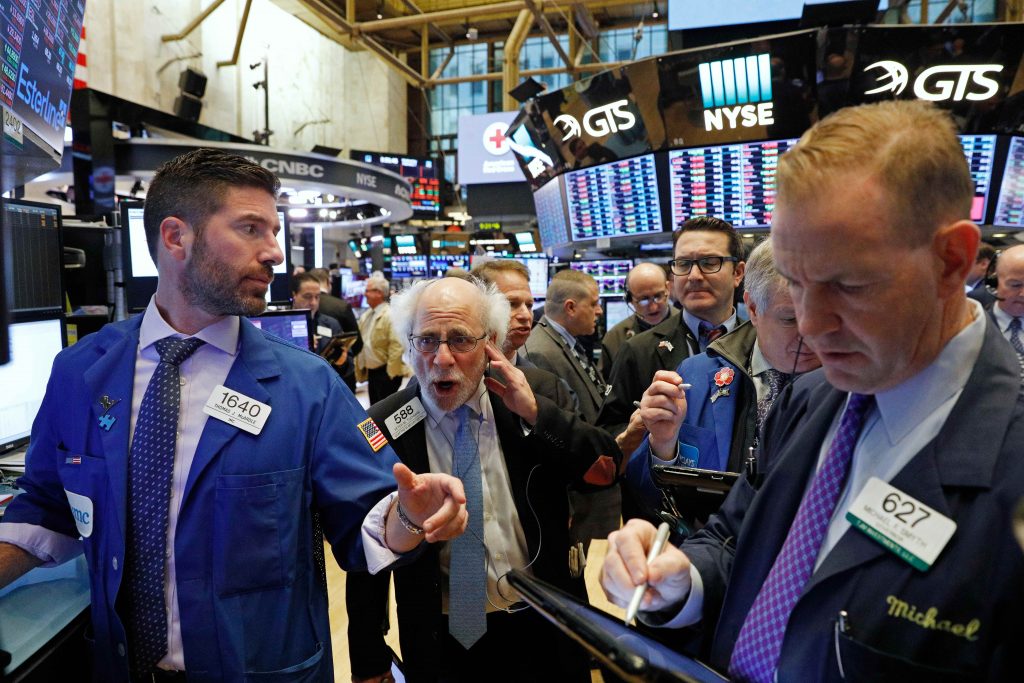 U.S. stocks gave up an early rally and are little changed in afternoon trading Wednesday as gains for industrial companies and banks are mostly canceled out by losses for energy and technology companies. The market is calmer than it had been in the last few days but remains beneath the record highs it set last month.

After a slightly lower open, most stocks turned higher within the first few minutes of trading, only to slip in the early afternoon.

After two steep plunges, including its worst loss in six and a half years, followed by gains Tuesday, the S&P 500 is down 6.2 percent from its most recent record high set on January 26.

Wednesday’s swing was significant, but was dwarfed by the lurching moves the market has made over the last few days. The Dow plunged 1,175 points Monday and went through huge swings Tuesday, when it dove to an early loss of 567 points, then wound up with a gain of 567 points.

While markets have steadied somewhat, investors are still far more nervous than they were just a few days ago. The VIX index, which is called Wall Street’s “fear gauge” because it measures how much volatility investors expect in the future, is currently at 25, about double where it was two weeks ago. It spiked above 50 early Tuesday.

Individual news from companies took center stage again. Newspaper publisher Tronc soared $4.48, or 24.8 percent, to $22.58 after it agreed to sell the Los Angeles Times and a group of other newspapers.

Dr. Patrick Soon-Shiong, a major Tronc shareholder and former board member, plans to pay Tronc $500 million for those publications. The Los Angeles Times has endured a great deal of turmoil recently. It has changed its top editor three times in the last six months.

Snap, the parent of Snapchat, rose $5.24, or 37.3 percent, to $19.31 after it reported strong user growth and greater-than-expected revenue in the fourth quarter. The stock went public in March and traded above $29 a share shortly after its initial public offering.

Chipotle Mexican Grill sank $32.02, or 10.5 percent, to $272.31, as investors were concerned that visits from customers continues to decline after a series of food safety scares over the last few years.

Energy companies sank with oil prices. Benchmark U.S. crude dropped $1.88, or 3 percent, to $61.51 a barrel in New York. Brent crude, the international standard for oil prices, fell $1.45, or 2.2 percent, to $65.41 a barrel in London. That came after the U.S. government said oil production jumped last week, raising concerns about an increase in the supply of crude. Supplies of gasoline and diesel also rose, further pressuring prices.

The current bull market is set to turn nine years old in about a month. As of Jan. 26, the date of the last market record, the S&P 500 had more than quadrupled over that time. The market had made big gains over the last year, and many experts felt stocks were overdue for a slump.

Stocks began to fall Friday after U.S. jobs data showed wages growing more than anticipated. If that continues, it could stoke inflation and prompt the Federal Reserve to raise interest rates more and more quickly than previously expected.

There were few signs investors were avoiding stocks entirely. Bond prices were little changed. The yield on the 10-year Treasury note rose to 2.84 percent from 2.81 percent. The price of gold fell 0.8 percent and silver lost 1.3 percent. Precious metals prices have actually decreased over the last few days.