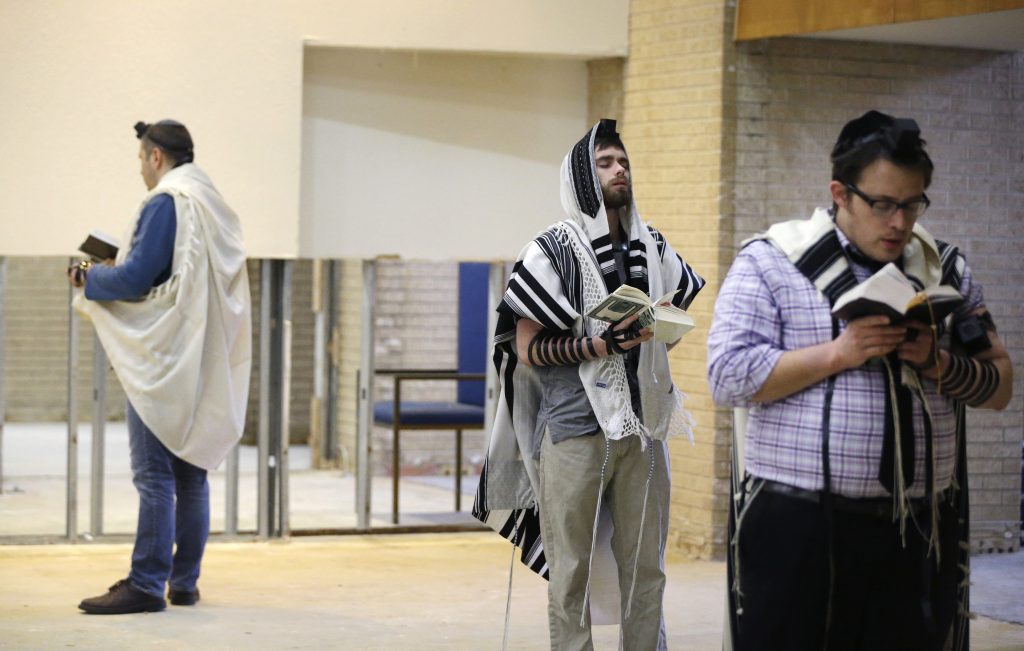 Light peeking through stained glass windows illuminated the melancholy faces of the men of United Orthodox Synagogues as they put on their traditional tefillin and tallit to prepare for the shul’s last morning prayer. They bowed their heads alongside the women in the congregation, separated by a cloth partition.

The Houston Chronicle reports that after suffering damage from three floods in as many years, the synagogue’s board of directors made a decision to demolish the sanctuary, school wing and offices. More than 150 congregation members gathered or tuned in to a web stream for the Feb. 4 final service.

“If someone had told me 10 years ago that it would all end like this, I would have thought they were telling a fantasy,” congregant Denise Weinberg said.

The synagogue is located on Greenwillow Drive in the historic Jewish community in Meyerland, just hundreds of feet from Brays Bayou. About 1 in 13 Jewish families there — an estimated 2,000 households — were flooded by Hurricane Harvey.

A tour through the synagogue makes clear the drastic effects of the floods of Memorial Day 2015, Tax Day 2016 and Harvey. Rust covers ovens in the kitchen. Watermarks stain memorial plaques that line the walls. In the library, only bare shelves remain after floodwaters ruined hundreds of sacred books.

“You spend a whole lifetime collecting things that remind you of other things, just for the water to take it all away,” Weinberg said.

In an effort to save their synagogue, United Orthodox had engineers look at the building, received the help of over 500 volunteers and had many fundraisers. Rabbi Adir Posy said residents of 46 states and four Canadian provinces donated $400,000. Posy has worked closely to help the synagogue rebuild, and he flew in from Los Angeles so he could attend the final services.

“In 2015 and 2016, Houston came together to help us; in 2017 it was the entire American Jewish community,” said board member Amy Goldstein. “It was so impacting we could not deal with it ourselves.”

Ultimately, the board decided repairing a building that repeatedly flooded would be a poor investment.

The synagogue’s goal for demolition is March. Freedman Hall, an elevated reception hall next door, will continue to serve as the temporary sanctuary.

Goldstein said the board of directors is exploring all viable options for a new building, such as rebuilding with elevated facilities or moving to a new location. A challenge is that since Orthodox Jews don’t drive on the Sabbath, congregation members must live within walking distance of the synagogue. After Harvey, several congregants spent a significant amount of their savings to fix their homes in order to stay in the neighborhood.

“Going anywhere else would be a significant religious choice to make,” Goldstein said.

On the final Sunday morning, old photos taken in the synagogue were spread across tables so worshippers could take a look into their building’s past. Rabbi Barry Gelman had many pictures of his family on Jewish holidays and occasions celebrated in the synagogue, which he said were moments he would never forget.

“I have fond memories of sitting with my three generations of family,” Gelman said. “The walls in this room have absorbed the story of a lifetime.”

United Orthodox broke ground on the complex in 1961 when the congregations Adath Emeth, Adath Israel and Beth Jacob merged. The building’s original plans were on display to honor the original days of the congregation. A photo of the synagogue when it was first built read, “Designed to Serve Forever.” Many members of the congregation said they believe that though their sanctuary soon will be gone, their memories will always remain.

“I have absolute faith that the things that mean the most to us are going to continue,” said Dov Liberman, an official in the synagogue.

After morning prayer, congregants reflected on a few of their favorite synagogue memories. They shared childhood stories of running behind the stained glass and emotional reflections of members who have died. When Holocaust survivor Alex Pollak reminisced about his second bar mitzvah last November, the crowd erupted in cheers.

Two congregation members, Max Reichental and Steve Moore, are cousins who have been with the synagogue since its beginning. The two said the building has always been the hub of everything in their lives. Moore had his bar mitzvah at the synagogue in its second year, and he teared up when he thought back to his sister’s wedding there.

“I will never forget that day.” Moore said.

The sanctuary is filled with sacred decorative features that have played an important part in the building’s history. The main stained glass window, memorial plaques dedicated to congregation members and other physical reminders of the synagogue’s past are being kept in hopes they will be moved to a new building.

In a final gathering of closure, members of the congregation sat in their old seats to listen to speeches from United Orthodox President Rick Guttman and Gelman. The two thanked everyone who made the service possible and spoke about what the synagogue means to them.

Once the last words were said and the services were over, congregants talked and laughed with one another over their personal history with the synagogue. Gloria Ribnick, a member for “forever and then some,” spoke of a brighter future in the congregation.