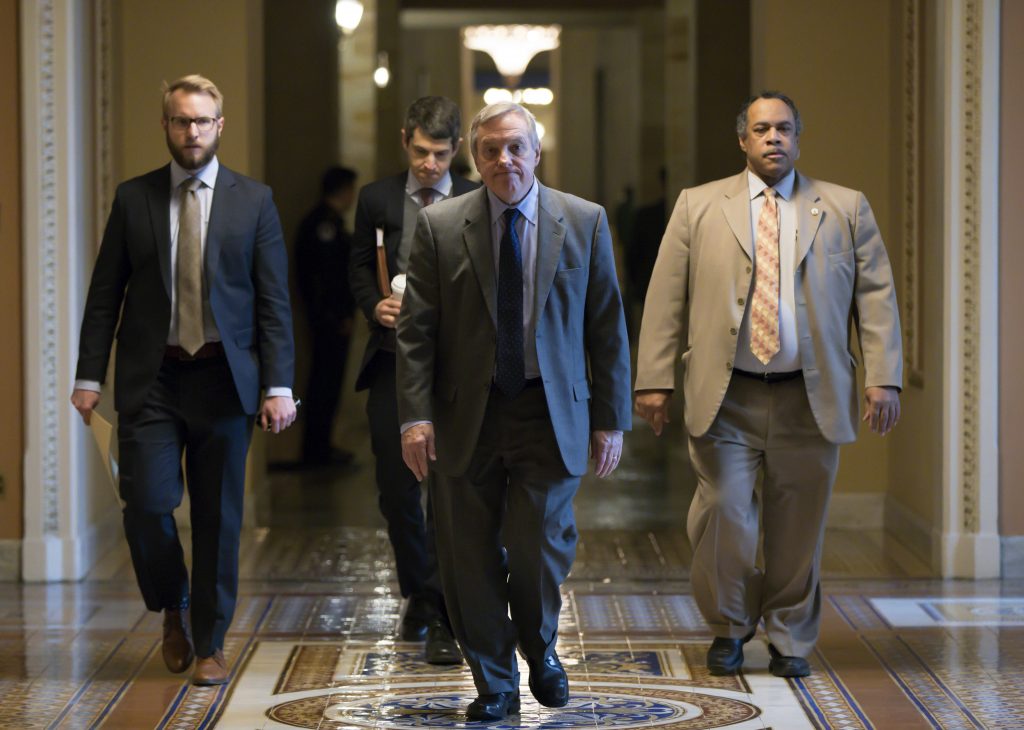 Senate leaders announced Wednesday they have sealed an agreement on a two-year budget pact that would shower the Pentagon and domestic programs with almost $300 billion above existing limits, giving wins to both GOP defense hawks and Democrats seeking billions for infrastructure projects and combatting opioid abuse.

The agreement is likely to be added to a stopgap spending bill that passed the House on Tuesday, aimed at averting a government shutdown Thursday at midnight. Democratic leader Chuck Schumer of New York called the Senate agreement “a genuine breakthrough.”

“This bill achieves our top priority, a much needed increase in funding for our national defense,” said White House Press Secretary Sarah Huckabee Sanders. “The bottom line is that thanks to President Trump we can now have the strongest military we have ever had.”

However, it would not resolve the plight of immigrant “Dreamers” who face deportation after being brought to the U.S. illegally as children. As the Senate leaders were announcing their agreement, Minority Leader Nancy Pelosi of California was holding the floor in the House, declaring she would oppose the measure unless her chamber’s GOP leaders promised a vote on legislation to protect the younger immigrants.

That introduced doubts as to whether the plan could pass in House, where prominent GOP conservatives are also opposed to the higher spending.

The Senate agreement also contains almost $90 billion in overdue disaster aid for hurricane-slammed Texas, Florida and Puerto Rico. That would bring the total appropriated for disaster aid in the wake of last year’s disastrous hurricane season to almost $140 billion.

The agreement would increase the government’s borrowing cap to prevent a first-ever default on U.S. obligations that looms in just a few weeks. The debt limit would be suspended through March of 2019, Sanders said, putting the next vote on it safely past this year’s midterm elections.

The House Tuesday passed legislation to keep the government running through March 23, marrying the stopgap spending measure with a $659 billion Pentagon spending plan, but the Senate plan would rewrite that measure.

Senate Democratic leaders have dropped their strategy of using the funding fight to extract concessions on immigration, specifically on seeking extended protections for the “Dreamer” immigrants. Instead, Senate Minority Leader Schumer, D-N.Y., went with a deal that would reap tens of billions of dollars for other priorities while hoping to solve the immigration impasse later.

The budget agreement would give both the Pentagon and domestic agencies relief from a budget freeze that lawmakers say threatens military readiness and training as well as domestic priorities such as combating opioid abuse and repairing the troubled health-care system for veterans.

The core of the agreement would shatter tight “caps” on defense and domestic programs funded by Congress each year. They are a hangover from a failed 2011 budget agreement and have led to military readiness problems and caused hardship for domestic agencies such as the Environmental Protection Agency and the IRS.

The agreement would give the Pentagon an $80 billion increase for the current budget year for core defense programs, a 14 percent increase over current limits that exceeds Pres. Trump’s budget request by $26 billion. Nondefense programs would receive about $60 billion over current levels. Those figures would be slightly increased for the 2019 budget year beginning Oct. 1.

“For the first time in years, our armed forces will have more of the resources they need to keep America safe,” said Majority Leader Mitch McConnell, R-Ky. “It will help us serve the veterans who have bravely served us. And it will ensure funding for important efforts such as disaster relief, infrastructure, and building on our work to fight opioid abuse and drug addiction.”

Pelosi took to the House floor for more than three hours, and said she would oppose that almost-completed budget pact even though it would boost funding for many domestic priorities favored by Democrats. She declared the agreement “does not have my support, nor does it have the support of a large number of members of our caucus.”

Pelosi said the House should debate immigration legislation and noted that Senate Republicans have slated a debate on the politically freighted subject starting next week. At issue is legislation to address the dilemma of immigrants left vulnerable by Pres. Trump’s move to end former President Barack Obama’s Deferred Action for Childhood Arrivals program, or DACA.

“Let Congress work its will,” Pelosi said. “What are you afraid of?”

Rep. Nanette Barragan, D-Calif., a member of the Congressional Hispanic Caucus, said the Latino community thinks Senate Democratic leaders have “turned their back.”

But other Democrats said their party in the House may simply not have the leverage to force a DACA solution on conservative Republicans controlling that chamber.

“DACA’s important and it ought to get done. But what’s the path?” said Rep. Adam Smith, D-Wash.

Schumer said the plan would contain $20 billion dedicated to infrastructure such as highways and bridge construction and repair, water and wastewater projects, and rural broadband.

Schumer also touted the creation of a special committee that would try to solve a looming shortfall in union pension plans sought by Democrats from Ohio, Wisconsin, West Virginia, and other states.