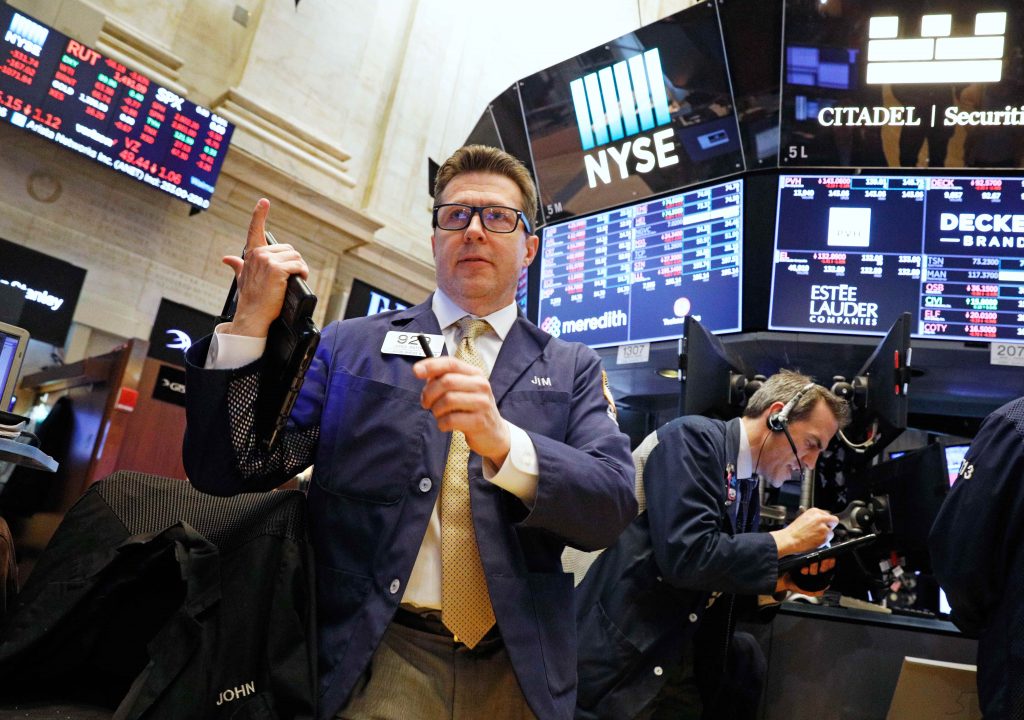 After big swings higher and lower, U.S. stocks are up slightly in afternoon trading Tuesday as investors look for calm after a global sell-off. The swings came one day after the steepest drop in 6 ½ years.

Major indexes in Asia and Europe fell following Monday’s 1,175-point drop in the Dow Jones industrial average. Investors remain fearful that signs of rising inflation and higher interest rates could bring an end to the bull market that has sent stocks to record high after record high in recent years.

The Dow Jones industrial average fell as much as 567 points shortly after the opening bell, then jumped as much as 367 points in the first half-hour of trading. It’s switched between gains and losses several times since then.

The steep drops Friday and Monday wiped out the gains the Dow and S&P 500 made since the beginning of the year, but both remain higher over the past 12 months. The Dow is still up 21 percent over that time, the S&P 500 16 percent.

The S&P 500 fell 6 percent Friday and Monday, and it’s down 7.6 percent from the recent record high it set on January 26. That’s less than the 10 percent drop that is known on Wall Street as a “correction.”

Corrections are seen as entirely normal during bull markets, and even helpful in curbing excessive gains and allowing new investors to buy into the market at lower prices. It has been an uncommonly long time since the last market correction, which ended almost two years ago. That meant Tuesday was likely to be one of the most watched days on the markets in years.

Despite the big swings, Tuesday’s trading looked similar to the patterns that have shaped the market for the last year: investors bought retailers like Amazon and Home Depot and technology companies, which do better when economic growth is strong.

Travel bookings site TripAdvisor was one of only two S&P 500 companies that finished higher on Monday. On Tuesday it rallied another $3.95, or 11.1 percent, to $39.57.

The biggest losses went to high-dividend companies including utility and real estate companies, as bond yields increased after a sharp drop on Monday. The yield on the 10-year Treasury note rose to 2.78 percent from 2.71 percent. Higher Treasury yields make high-dividend stocks like utilities less appealing to investors seeking income.

The market mood turned decidedly fearful the last two days. Friday’s U.S. jobs report showed wages grew at a faster pace in January, and investors worried that that means inflation is speeding up, and that the Federal Reserve will have to raise interest rates faster than previously expected in order to keep that inflation in check. Higher rates act like a brake on the economy by slowing down borrowing and lending.

Brent Schutte, chief investment strategist at Northwestern Mutual Wealth Management, said the plunge wasn’t caused by inflation fears alone. The markets have been unusually calm since late 2016, and he said investors were betting that would continue.

Schutte added that corrections can end quickly, and they often do so when investors see evidence of continued economic growth. Experts do think the global economy will keep growing this year even though that is likely to bring more inflation. Schutte said that as central banks stop propping up the market, trading will probably be more volatile in the next few years.

Investors often buy gold when they’re worried about market volatility, but they aren’t doing that now. Gold fell 0.4 percent to $1,330.70 an ounce and silver dipped 0.3 percent to $16.61 an ounce.

On Monday, the Dow finished down 4.6 percent while the S&P 500 sank 4.1 percent. The last fall of that size came in August 2011 when investors were fretting over Europe’s debt crisis and the debt ceiling impasse in Washington that prompted a U.S. credit rating downgrade.