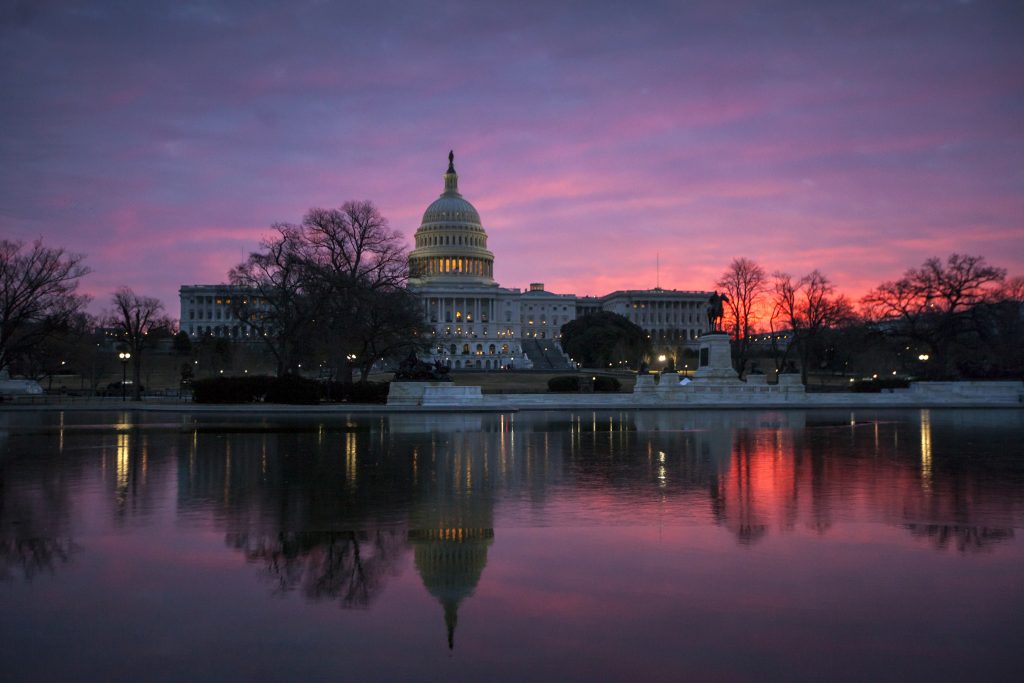 Buoyed by the sudden likelihood of a budget pact, lawmakers are on track to avoid a repeat of last month’s government shutdown — though President Donald Trump unexpectedly raised the possibility of closing things down again if he can’t have his way on immigration.

“I’d love to see a shutdown if we can’t get this stuff taken care of,” Trump declared Tuesday, repeating the sentiment for emphasis.

Trump’s comments were strikingly disconnected from the progress on Capitol Hill, where the House passed a short-term spending measure Tuesday night and Senate leaders were closing in on a larger, long-term pact after of a Thursday night deadline. The broader agreement would award whopping spending increases to both the Pentagon and domestic federal programs, as well as approve overdue disaster relief money and, perhaps, crucial legislation to increase the government’s borrowing limit and avoid possible default.

Democratic leaders have dropped their strategy of using the funding fight to extract concessions on immigration, specifically on seeking extended protections for the “Dreamer” immigrants who have lived in the country illegally since they were children. Instead, the Democrats prepared to cut a deal that would reap tens of billions of dollars for other priorities — including combatting opioids — while taking their chances on solving the immigration impasse later.

Tuesday night’s 245-182 House vote, mostly along party lines, set the machinery in motion. The six-week stopgap spending bill contains increases for the military that long have been demanded by Trump and his GOP allies. But the measure appears increasingly likely to be rewritten by the Senate to include legislation implementing the brewing broader budget pact.

The budget negotiations, conducted chiefly by the Senate’s top leaders, Republican Mitch McConnell of Kentucky and Chuck Schumer of New York, have intensified in recent days — and the looming government shutdown at midnight Thursday added urgency to the talks. In addition to the military and domestic spending, the deal taking shape would approve overdue disaster relief money and, perhaps, crucial legislation to increase the government’s borrowing limit and avoid possible default.

“I think we’re on the way to getting an agreement and getting it very soon,” said McConnell.

Prospects for dealing with immigration, however, were as fuzzy as ever. The Senate is slated next week to begin a debate to address the dilemma of immigrants left vulnerable by the looming expiration of former President Barack Obama’s Deferred Action for Childhood Arrivals program, or DACA.

Weeks of bargaining have left the two parties divided over how to extend protections for such Dreamer immigrants and a court ruling has blunted a March 5 deadline.

McConnell said Tuesday that while he hopes “we will end up having something,” he was unsure if any proposed measure would get the 60 votes needed for approval.

On Tuesday, White House chief of staff John Kelly threw fuel on the dispute as he defended Trump’s proposed solution. The retired general noted the White House proposal would expand protection for some 1.8 million immigrants. That group includes the 690,000 currently shielded.

The budget talks appeared to be going more smoothly.

The result could be the return of trillion-dollar deficits for the first time since Obama’s first term.

The stopgap spending bill would keep the government open through March 23 to allow time to write and pass detailed follow-up “omnibus” legislation to fund the government through the Sept. 30 end of the fiscal year.

The prospective longer-term budget agreement would give both the Pentagon and domestic agencies relief from a budget freeze that lawmakers say threatens military readiness and training as well as domestic priorities such as combating opioid abuse and repairing the government’s troubled health care system for veterans.

Aides in both parties said the budget measure may also contain a provision to raise the government’s $20.5 trillion borrowing limit. Legislation to increase the debt ceiling is always a headache, especially for House GOP leaders whose rank and file have in the past used the votes to register objection to deficit spending.

Another likely addition is more than $80 billion in long-overdue hurricane relief for Texas, Florida and Puerto Rico, a top priority of lawmakers in both parties.

Under Congress’ arcane ways, a broad-brush agreement to increase legally binding spending “caps” — which would otherwise keep the budgets for the military and domestic agencies essentially frozen — would be approved, then followed by a far more detailed catchall spending bill that would take weeks to negotiate.

It’s clear that Senate Democrats have no appetite for another government shutdown. Their unity splintered during last month’s three-day closure.

House Minority Leader Nancy Pelosi, D-Calif., had linked progress on the budget with action to address the immigration program, but other Democrats are beginning to agitate for delinking the two, lest the opportunity for a budget pact be lost. And having tried and failed to link progress on the budget to DACA during last month’s government shutdown battle, many Democrats aren’t spoiling for a repeat.

“It’s hard. If we can get a good deal that funds disaster relief, funds domestic priorities, funds the opioid crisis it would be a difficult call,” said Rep. Adam Smith, D-Wash. “DACA’s important and it ought to get done. But what’s the path?”

Schumer said he and Pelosi are “working from the same page,” appearing to discount speculation that she might oppose the coming pact.