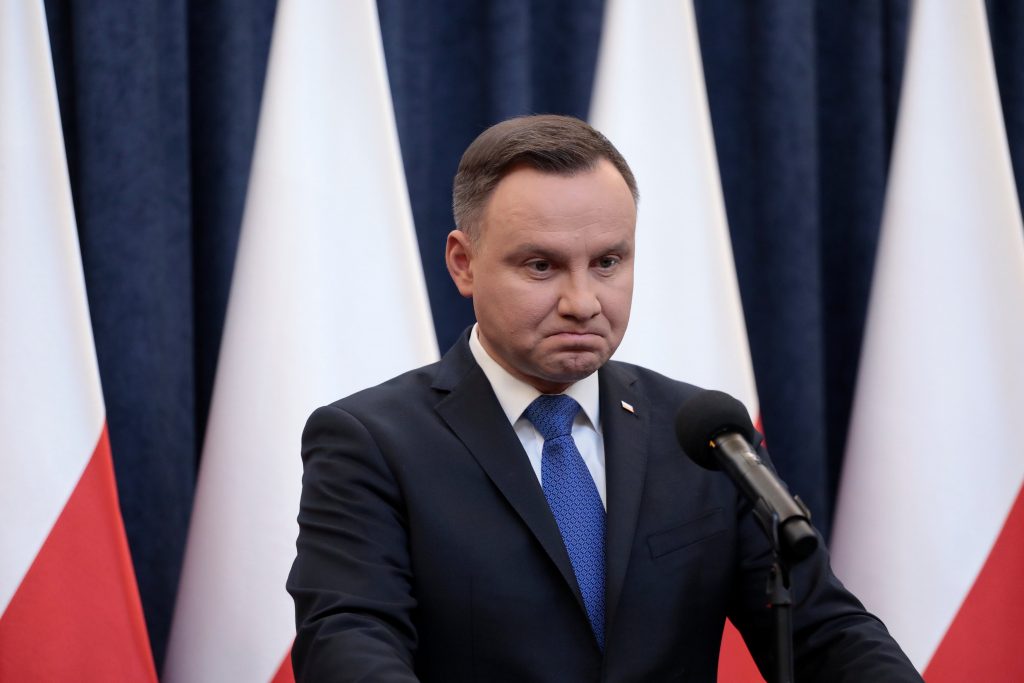 Poland’s President Andrzej Duda signed the Holocaust Bill on Tuesday, making it a crime to blame Poland for Holocaust crimes, while holding out hope for amendments that will address objections raised by Israel and the United States.

The law takes effect 14 days after it’s officially published, but it wasn’t immediately clear when that will be. In the meantime, Poland has offered to send a delegation to Israel to work out a text acceptable to both countries, according to Channel 10 news.

The delegation reportedly would include Poland’s deputy foreign minister and the legal adviser of the prime minister. However, Israel has not yet responded.

Earlier on Tuesday, Pres. Duda said he would also ask Poland’s constitutional court to review the bill, though it was not clear whether there would be sufficient time for it to do so before it becomes law.

The controversy continued to rage on Tuesday.

Deputy Foreign Minister& Tzipi Hotovely& pledged to keep up the pressure on Poland to amend the law.

“Israel has clarified to the Polish government that it will not accept any law that deals with the silencing of history and the denial of the involvement of Polish citizens in the murder of Jews at the time of the Holocaust,”& Hotovely& said.

Some were calling for a tougher response, however. Jewish Home MK Shuli Moalem-Refaeli demanded the expulsion of the Polish diplomatic delegation from Israel and the return of Israel’s ambassador from Warsaw.

“True, it’s dramatic, but a country that rewrites the history of the Holocaust is not a friend of Israel,” she said.

In the U.S., Malcolm Hoenlein, the executive vice chairman of the Conference of Presidents of Major American Jewish Organizations, stated that Poland has made an “issue” out of its people’s actions during the Holocaust and is denying the truth, The Associated Press reported.

He said that while Poles who helped save Jews during the Holocaust should be recognized, Poland should also acknowledge that many Poles were complicit in aiding the Nazis.

“It is not credible to engage in the denial,” Hoenlein said on Tuesday. It would be better if Poland said “there was evil done. We recognize it.”

While Pres. Duda has said he will sign the bill, he held out hope on Tuesday that revisions would be made before its enactment as law, saying a high Polish court will evaluate the wording of the proposals to make room for possible amendments.

He also said that artistic and historical research work will be exempted from penalties of up to three years in prison for blaming Poland for complicity in Nazi Germany’s crimes.

Pres. Duda said during a visit to Israel last year he was made aware of expectations that the legislation should not block artistic or historical work on the Holocaust.

After the parliament passed the bill, the Polish president was not obligated to sign it. He had the options of sending it back to parliament for further debate, requesting changes or outright rejecting it.

There was no shortage of criticism of Duda and the bill inside Poland as well.

Slawomir Neumann of the centrist Civic Platform party accused Pres. Duda of giving in to the pressure of nationalists and anti-Semites and said his signing “deepens the diplomatic crisis.”

Neumann dismissed the idea of referring it to the constitutional court, which he characterized as a body without independence that will rule as the governing party wishes.

Jan Grabowski, a historian at the University of Ottawa in Canada, an expert on Polish treatment of the Jews during World War II, called Duda’s signing of the law “further proof that the nationalists now in power in Poland will do anything to cater to the hard, right-wing core of their electorate.”

“Unfortunately, it is not only the nationalists but also the whole Polish society which will have to pay the price,” said Grabowski, who is also a member of the Polish Center for Holocaust Research in Warsaw.

The furor over the legislation has also touched off a surge in anti-Semitism in Poland. Once again, Israelis and American Jews are being smeared with the accusation that they are exploiting the issue as a pretext for getting money from Poland for prewar Jewish property seized in the communist era.