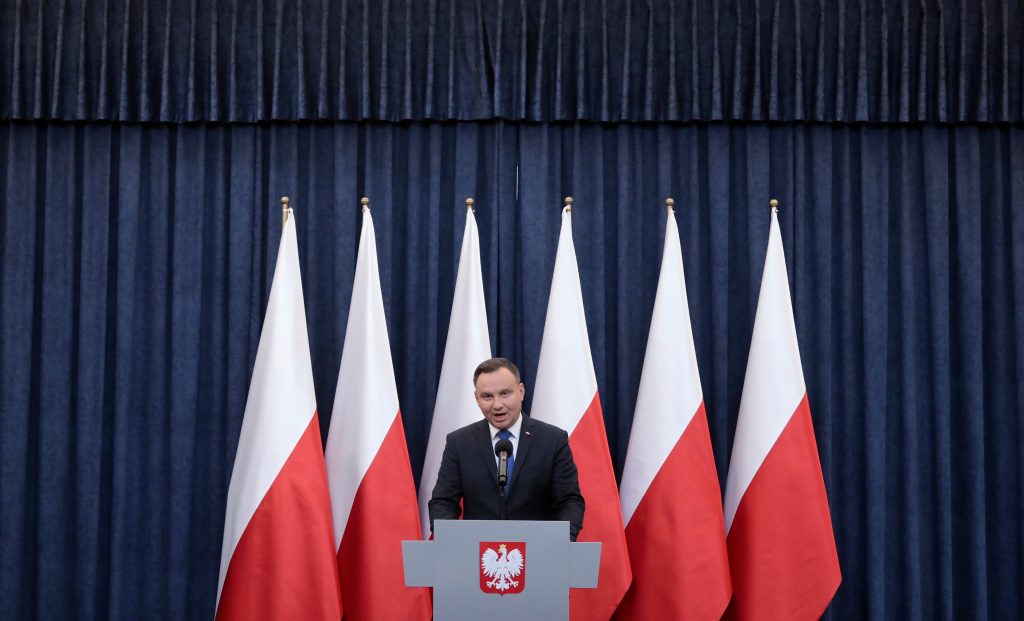 Polish President Andrzej Duda announced that he would sign a highly controversial bill Tuesday that will ban any Holocaust accusations against Poles as well as descriptions of Nazi death camps as Polish – likely raising tensions with the United States and Israel that have criticized the measure.

An ally of the ruling right-wing Law and Justice Party who occasionally has been willing to buck the party’s will, Duda also announced that he would ask the country’s Constitutional Tribunal to review the bill to check whether it complies with Poland’s fundamental rights, such as freedom of speech.

But the law is expected to take effect before the tribunal would be able to issue any clarifications, and the independence of the tribunal itself has recently been questioned after the Law and Justice Party passed reform plans that critics condemned as an “assault” on the judiciary.

The bill’s international critics – which include the U.S. State Department and the Israeli government – argue that the bill will violate freedom of expression. Once it is in effect, it will essentially ban accusations that some Poles were complicit in the Nazi crimes committed on Polish soil, including in the Auschwitz-Birkenau extermination camp, where more than 1.1 million people died. Germany operated six camps in Poland where Jews and others that the Nazis considered enemies were killed. Once the legislation is signed into law, anyone convicted under the law will face fines or up to three years in jail.

The State Department said in a statement last week that the phrase “Polish death camps” was “inaccurate, misleading, and hurtful.” But it also said the proposed legislation “could undermine free speech and academic discourse.” The Department’s statement warned that if the legislation is implemented, it could have “repercussions” for “Poland’s strategic interests and relationships.”

In Israel, the reaction was fierce, too. “One cannot change history, and the Holocaust cannot be denied,” Prime Minister Binyamin Netanyahu said in a statement last week.

Netanyahu and Polish Prime Minister Mateusz Morawiecki spoke on the phone 10 days ago, but despite appearing to agree to a diplomatic dialogue, the Polish government stood by the bill last week and pursued Senate approval.

Deputy Justice Minister Patryk Jaki later referred to Israeli reactions as “proof of how necessary this bill is.”

Leading Polish politicians defended the legislation last Friday, with Morawiecki again emphasizing that Poland did not share any responsibility for the Holocaust. Jarosław Kaczyński, the leader of the Law and Justice Party, said that the term “Polish death camps” and other comparisons constituted “a scandalous and immensely immoral lie.”

The ruling party’s critics say that the new draft legislation is mainly intended to fuel nationalistic sentiments in the country. “This is all about nationalism really, and about the imposition of a nationalist historic narrative,” said political scientist Rafal Pankowski in an interview last week. The Law and Justice party’s emphasis on Poland’s heroic past has proved an effective domestic electoral strategy, even as it has faced a damaging international backlash after accusations of having emboldened the far right itself.

But apart from causing rifts with close allies and drawing international condemnation, the debate about the bill has also resulted in an intense focus on the very questions of complicity that nationalist Poles were hoping to sweep aside once and for all.

“The government achieved exactly the opposite of what it wanted,” Piotr Buras, head of the Warsaw office of the European Council on Foreign Relations, told The Post’s Griff Witte last week. “The unintended consequences and the international damage have been huge.”