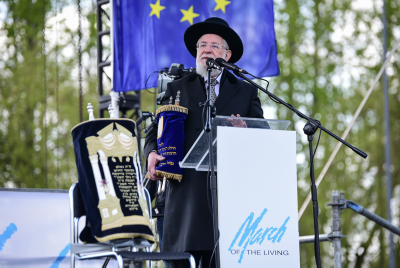 In the wake of the storm of opposition in Israel to a Polish law that would prosecute anyone accusing the Polish nation of war crimes during the Holocaust – and the cancellation of a trip by Education Minister Naftali Bennet to Poland after he said that he would “clarify” that the country could not “rewrite history” – Yerushalayim deputy mayor Yael Antebi has urged Bennett to cancel the annual March of the Living event, and hold a major Holocaust commemoration in Israel.

The March of the Living sees young people and adults from the U.S., Israel, and Europe visiting the death camps of Poland and Europe on Holocaust Memorial Day, arriving in Israel a week later, in time for Israel Independence Day. Along with that event, most Israeli public and state religious high schools hold annual trips for junior or senior students to Poland, where they tour the sites associated with the Holocaust.

Those trips, along with the March of the Living, have for years been a matter of great debate in the Israeli education system, with advocates saying that the experiential aspects of the trips deliver a clear message about the Holocaust and Jewish survival throughout the ages, while opponents decry the large amounts of money that the government and Jewish groups around the world spend on the trips, which are a mainstay of Poland’s tourism economy.

Antebi, in a letter to Bennett, described both sides of the argument, but in the wake of the new law passed by the Polish legislature that would forbid assigning blame to the Polish nation for the events of the Holocaust, the argument favors those opposed to the trips. “This is an opportunity for the government and the Educational Ministry to stop paying for these trips, and at the same time to establish an experience that will teach students the significance of the Holocaust right here in Israel.”

The fact that Israel is transferring large sums of money to Poland is morally wrong, she wrote. “The Poles were the partners of the Nazis, and as such we are not allowed to provide them with economic support – especially in the guise of paying for trips to the death camps. It is not by accident that the Germans set up nearly all the death camps in Poland. They knew there would be no opposition.”

The trips, she said, are likely not even to have the intended results in educating students. “There has not been one study that has proven that this project, in which so much money has been invested, even has any positive educational impact,” she wrote. In addition, she said, the trips to Poland had many negative aspects, especially among groups of secular students. “Pilgrimages to sites outside of Israel are not educationally enhancing, especially when for some students the main attraction is visiting shopping centers and the trips involve chillul Shabbos and the consumption of treifos. The best thing would be to hold the March of the Living in Yerushalayim, the true symbol of the living Jewish people.”