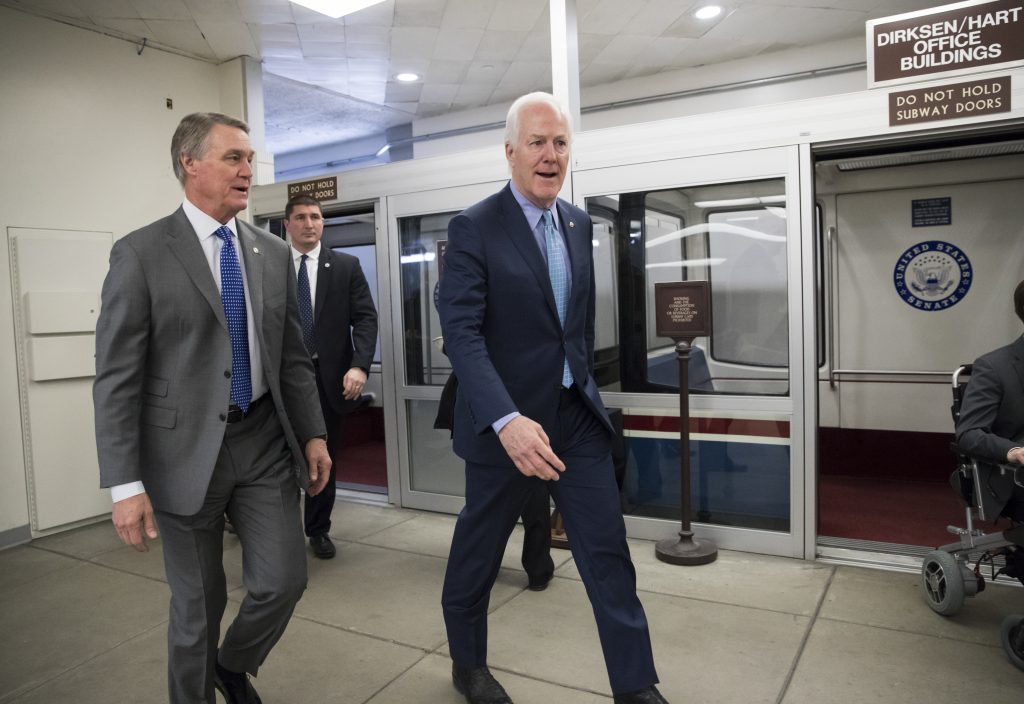 Senate leaders closed in on an agreement Tuesday to award whopping spending increases to both the Pentagon and domestic federal programs as well as long-sought disaster relief money and, perhaps, action to increase the government’s borrowing cap.

The looming government shutdown at midnight Thursday added urgency to the negotiations, conducted chiefly by the Senate’s top leaders, Republican Mitch McConnell of Kentucky and Chuck Schumer of New York. They met Tuesday morning in an effort to bring the talks toward closure.

“I’m pleased to report that our bipartisan talks continue to progress toward an agreement on spending caps and important priorities all of us are eager to address,” said McConnell.

The GOP-controlled House, meanwhile, was ready to pass a separate stopgap plan to keep the government open for six more weeks. That would allow time to write and pass detailed follow-up legislation to fund the government through the Sept. 30 end of the fiscal year.

The prospective longer-term budget agreement would give both the Pentagon and domestic agencies relief from a budget freeze that lawmakers say threatens military readiness and training as well as domestic priorities such as combating opioid abuse and repairing the government’s troubled health-care system for veterans.

Aides in both parties said the budget measure may also contain a provision to raise the government’s $20.5 trillion borrowing cap. Legislation to increase the debt ceiling is always a headache, especially for House GOP leaders whose rank and file hate such votes.

Support among House Republicans for the potential agreement could be helped by the likely addition of more than $80 billion in long-overdue hurricane relief for Texas, Florida, and Puerto Rico.

Meanwhile, the House stopgap spending bill appears increasingly likely to be a placeholder designed to be amended later in the Senate to carry the budget pact. For now, the measure contains a full-year, $659 billion Pentagon spending bill that’s a top priority of the GOP’s legion of defense hawks.

That idea, however, is a nonstarter with Senate Democrats, who insist that increases to both the Pentagon and domestic programs advance at the same time.

Pairing the Pentagon’s budget with only temporary money for the rest of the government wouldn’t go anywhere in the Senate, Schumer said. He and McConnell both reported progress toward a plan that would respond to the House bill with a long-awaited spending pact to give big increases both to the Pentagon and domestic programs — almost $300 billion spread over two years.

Talks in the Senate on such a framework appear to be at a critical stage, intensifying in hopes of an agreement this week, aides and lawmakers said. The House GOP strategy appears designed in part to invite the Senate to complete budget negotiations and use the temporary spending bill to advance such a budget agreement.

White House Chief of Staff John Kelly made the rounds on Capitol Hill as well.

Under Congress’ arcane ways, a broad-brush agreement to increase legally binding spending “caps” — which would otherwise keep the budgets for the military and domestic agencies both essentially frozen — would be approved, then followed by a far more detailed catchall spending bill that would takes weeks to negotiate.

It’s clear Senate Democrats have no appetite for sparking another government shutdown. Their unity splintered during last month’s three-day shutdown.

One especially tricky question is whether House Democrats would approve of a spending agreement if there isn’t much progress in addressing the issue of immigrants left vulnerable with the looming expiration of former President Barack Obama’s Deferred Action for Childhood Arrivals program. That is a priority for many House Democrats, especially those from the Hispanic Caucus.

House Minority Leader Nancy Pelosi, D-Calif., has linked progress on the budget with action to address the immigration program, but other Democrats are beginning to agitate for delinking the two, lest the opportunity for a budget pact be lost.

The broader budget picture is one in which GOP defense hawks are prevailing over the party’s depleted ranks of deficit hawks while Democrats leverage their influence to increase spending for domestic priorities such as combating opioid misuse.

The result could be the return of trillion-dollar deficits for the first time since former President Barack Obama’s first term.

Details are closely held and subject to change. But at issue is a two-year deal to increase caps on spending set by a failed 2011 budget deal. Republicans have pushed for defense increases in the neighborhood of $80 billion a year and have offered Democrats nearly as much — $60 billion or so per year — for nondefense programs.

Add in $80 billion to $90 billion worth of hurricane aid for Texas, Florida and Puerto Rico, health-care funding and money for President Donald Trump’s border security plan, and the final tally could total close to $400 billion. The potential cost, over the 2018-19 budget years, would rival the deficit impact of last year’s tax measure over that period.