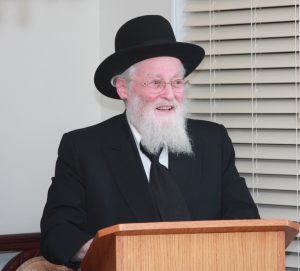 The Torah world was thrown into mourning Tuesday with the passing of Harav Zvi Dov Slanger, Rosh Yeshivah of Bais Hamedrash and Mesivta of Baltimore.

Harav Slanger was born in Budapest. His father, Reb Avraham Yitzchok Slanger, z”l, was a descendant of Harav Shlomo Zalman Ulman, zt”l, the author of sefer Yerios Shlomo, and the Chacham Tzvi, zt”l, and was the financial manager of large textile company. He was involved in the business world, while remaining very dedicated to limud haTorah and meticulous in shemiras hamitzvos.

In 1944, as conditions deteriorated in Hungary, the Slanger family managed to be granted transport on the Kasztner transport, which supposedly was to take them to Spain, and then to Eretz Yisrael. However, after spending several days under miserable conditions, the passengers on the train found themselves in the city of Linz, where they were herded into the gas chambers. Remarkably, many hours passed inside the gas chambers, and finally the doors were opened and they were taken to regular showers. They were then taken to Bergen-Belsen, where they were assigned to barracks. Even though they were not subject to the same inhumane treatment as most of the inmates and did not have to work, it was a terrible time.

After five months, they were sent on a grueling march from Bergen-Belsen to a train station in Celle. Rav Slanger saw that his younger brother, Rav Elyakim, was much weaker than he was, and he ended up carrying his brother on his back for most of the march. Baruch Hashem, they both reached the train station, from where they were taken to Switzerland and then to Eretz Yisrael.

In Eretz Yisrael, Harav Slanger learned in Zichron Yaakov, where he met Harav Elya Lopian, zt”l, who made a great impression on him. Rav Slanger recalled that seeing Harav Lopian recite Krias Shema with great concentration and love for the Ribbono shel Olam made an incredible impact on the young refugee. Later, Rav Slanger transferred to Slabodka in Bnei Brak, where he was zocheh to develop close relationships with many of the Gedolim there, including Harav Eliyahu Dessler, zt”l, Harav Shach, zt”l, and the Chazon Ish, zt”l. 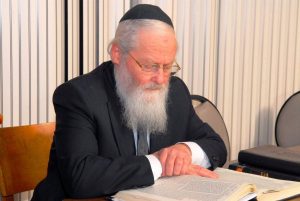 In 1959, he married Chana Mandelbaum, the daughter of Harav Baruch Mandelbaum, who lived in the famed Mandelbaum Gate in Yerushalayim.

In 1965, the Slanger family moved to Baltimore, where Harav Slanger became a Maggid Shiur in Yeshivas Ner Yisroel. For many years, Harav Slanger aspired to open a yeshivah in the derech that he experienced in Eretz Yisrael, but would not do so until he had the approval of Harav Shach, with whom he maintained a very close relationship.

Finally, in 1988, Harav Shach wrote to Harav Slanger that the time has come to open the yeshivah. However, it was eight more years until the yeshivah finally opened its doors, in Elul 5757. The yeshivah has seen much siyatta diShmaya, and has gained a reputation as a premier makom Torah, both for the Baltimore community and beyond. 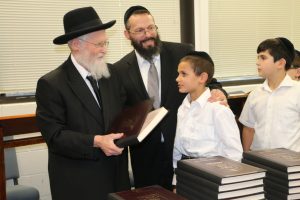 Harav Slanger lived his life with the mission of rebuilding the Torah that was lost in Europe. In an article previously published in Inyan Magazine, he was quoted as saying, “The ikar is to build Torah. I saw the Churban. I lived through the destruction of Torah in Europe, and it is clear to me that we must rebuild the tremendous loss.”

It was with this passion that he taught Torah, built a makom Torah, and was maamad countless talmidim around the world.