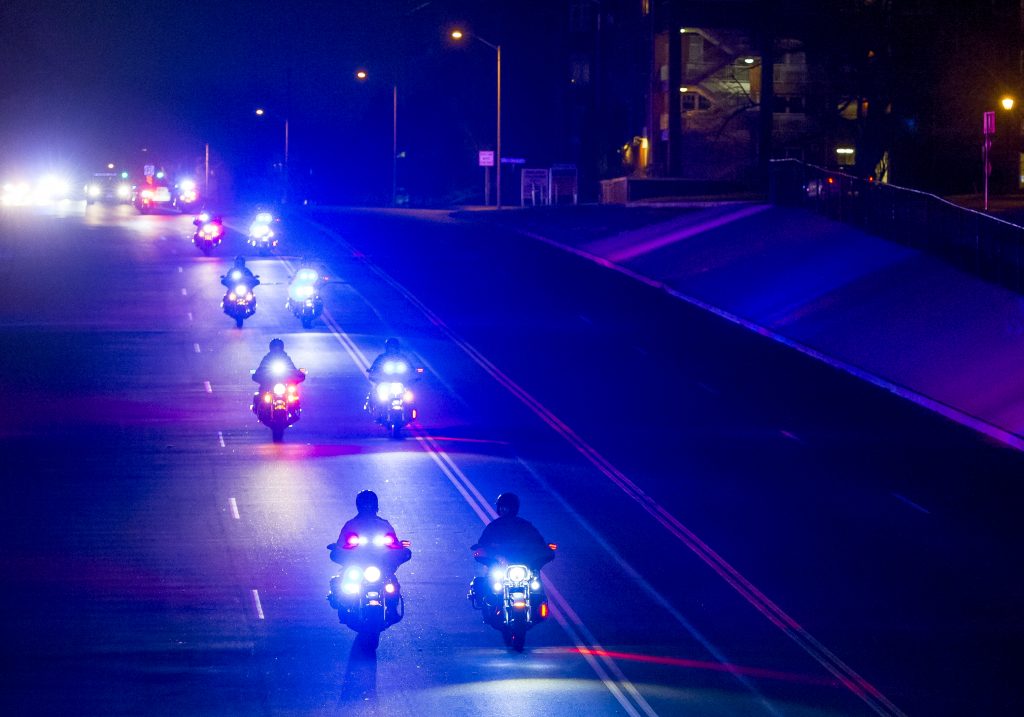 Colorado is mourning the loss of its third law enforcement officer killed in the line of duty in five weeks after a sheriff’s deputy was shot while investigating a stolen car.

Deputy Micah Flick, 34, was killed, and four others — two sheriff’s deputies, a police officer and a bystander — were wounded Monday in a shooting in a neighborhood of single-family homes, apartments and retail stores just east of downtown Colorado Springs.

“They encountered an adult male suspect, a struggle ensued and shots were fired,” Colorado Springs Police Chief Pete Carey told reporters at the hospital where Flick and the injured were taken.

A day later, several police cars still blocked entry to some parking lots for an apartment complex and police tape roped off a large portion of the complex. A few residents lifted the police tape as they went out to cars or returned home, but the area was otherwise quiet.

One of the sheriff’s officers who was wounded, Sgt. Jake Abendshan, was treated and released Monday night, but Deputy Scott Stone remained in the hospital in stable condition Tuesday, the sheriff’s office said. The conditions of the police officer and the bystander have not been released.

Flick was killed on his 11th anniversary with the sheriff’s office. He leaves behind a wife and 7-year-old twins.

“Deputy Flick was an outstanding member of my agency and he will be missed,” said El Paso County Sheriff Bill Elder, who choked up while talking to reporters.

Flags were lowered on state buildings at the order of Gov. John Hickenlooper, who said that the deadly violence against officers is having a “grave impact” on Colorado.

“We will once more come together to provide sympathy and strength for the deputy’s loved ones and pray for the recovery of those injured; however, we also must come together and say enough is enough,” he said in a statement.

It also wasn’t clear who fired or how many shots were fired. Carey and Elder didn’t take questions after delivering brief statements Monday.

Jason Adams, 52, who lives nearby, told the Colorado Springs Gazette that he heard gunshots and ran to the scene, which he described as a “war zone.”

He said he saw emergency responders tending to three people lying on the ground, one of whom appeared to have bullet wounds in the side of his torso.

Police remained in the area hours after the shooting, while other officers and bystanders lined the streets to watch as a procession drove Flick’s body from a local hospital to the coroner’s office.

The Gazette reported that the shooting happened as a group was donating 14 new tactical vest packages to the sheriff’s office and police department. During the presentation, a police officer reportedly arrived in tears and officers began hugging one another.

“Tonight there is no distinction between our uniforms. State Patrol, sheriff’s office and the Colorado Springs Police Department, our hearts are all broken,” he said Monday.