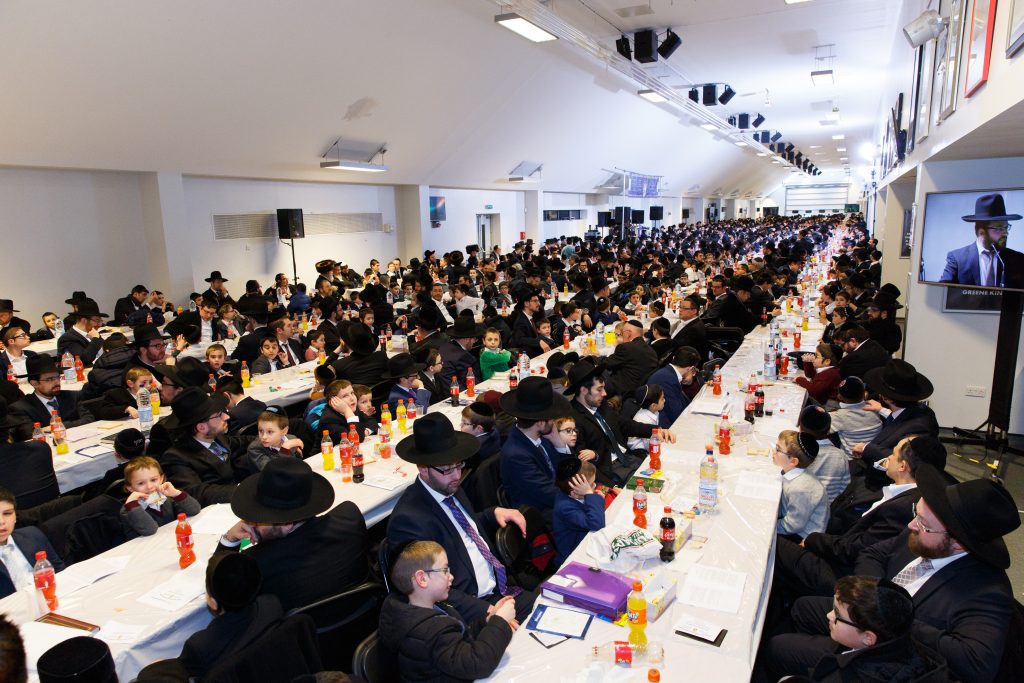 Achdus! Simchas HaTorah! Historic! Inspiring! Bonding of fathers and sons! These were just some of the many sentiments felt by all those fortunate to participate in the largest Torah gathering this country has witnessed for many years. The magnificent Kiddush Hashem witnessed at the Grand Siyum Mishnayos and Melaveh Malkah of Ovos Ubonim, North-West London, has had no parallel in recent memory.

Uniting the 39 Avos Ubonim centers across Golders Green, Hendon and Edgware was no small feat. Allianz Park’s 110 meter-long Olympic Bar was the perfect venue — the only nearby venue, in fact, that could possibly contain the over 2300 fathers and sons who were present.

In the months leading up to the grand Siyum, registration was opened for allocation of mishnayos in preparation. The mishnayos were distributed according to age, based on the “graded for difficulty” handbook compiled by the late Agudah Askan Reb Shlomo Leitner, z”l. Each boy who registered then received a personal printed mishnayos to learn from during the event.

With meticulous attention to detail, the organizers had set up 12 washing stations with bread outside the hall, so that there would be no need for anyone to leave their seat from arrival until the conclusion of the event. A Torah’dig activity booklet had also been prepared to occupy the children, allowing the fathers time to learn with each child individually. In keeping with the achdus theme of the event, there was no reserved seating, with everyone sitting wherever available.

The program may have only been scheduled to commence at 7.15pm, but by that time, merely one-and-a-half hours after nacht, over 100 boys were already learning with their fathers. At 7.30, the hall was filled with excited boys and parents relishing in the opportunity to complete the study of the entire six sedarim of mishnayos under one roof. This was followed by Tehillim led by noted mechanech Dayan Dovid Dunner, lirefuas Ariel Yehuda Ben Yehudis, followed by Kaddish recited by long-standing askan Reb Noach Schwartz.

The chairman, Rabbi Nechemia Jaffe, welcomed the vast gathering, uplifting the crowd with his divrei pesichah, driving home that fathers learning with their sons is a vital link in our mesorah between Torah learning generations. Announcing that the hadran had been sponsored by Mr. and Mrs. Sholom Lerner in memory of Mrs. Lerner’s parents, Reb Zalman and Mrs. Ruchi Noe, z”l, the chairman called upon their great-grandson, Yossi Lerner, to learn the final mishnah of Shas and recite the hadran.

Kaddish after the hadran had been dedicated l’ilui nishmas Mrs. Brucha Rosenthal, a”h, and was said by her son Mr. Sammy Rosenthal, answered with a thunderous “Amen yehei shmei rabba” that virtually shook the rafters.

The electrifying rekidos that followed broke any imaginary barriers between the varied stripes of Yidden who comprise the North West London kehillah. The yeshivish with the chassidish, Sefardim with Ashkenazim, all feeling overjoyed to be part of the treasured nation of Hashem. Heartfelt niggunim were sung by Shayele Gluck and his choir, along with Meilach Halpern on keyboard and new local star, Levi Cohen.

This was followed by a sumptuous melaveh malkah, ably served by volunteers from years 10 and 11 of Menorah Grammar School, Pardes House and Beis Hamedrash Elyon, clad in bright orange T-shirts for easy visibility. The chairman Rabbi Jaffe took the opportunity to extend heartfelt appreciation to those who had sponsored various parts of the evening as well as to the dedicated Reb Zalmi Sonnenfeld for coordinating the Rabbanim’s mishnayos.

Speaking with tremendous emotion, Harav Pinchos Schneebalg, shlita, Rosh Yeshivah of Vizhnitz, injected a further feeling of Yiddishe pride into the crowd. Citing a lesson from the Steipler Gaon, zt”l, Rabbi Schneebalg said that Torah learned with a struggle today is more precious to Hashem than that of the Vilna Gaon! “We are all princes!” the Rosh Yeshiva cried. “We can’t look where others can, we can’t talk how others do, but we must realize that WE are the privileged ones!”

Rabbi Schneebalg described the tremendous joy felt in Shamayim at how many hundreds of children had given up their free time to learn on Motzoei Shabbos. “You children have had the merit to sit in Gan Eden tonight!” he exclaimed. “Without the Torah we are nothing! Our entire existence is due to the Torah!”

A hush descended on the audience as the lights dimmed for a pre-recorded message from the Gateshead Rosh Yeshivah Harav Avrohom Gurwitz, shlita. The Rosh Yeshivah expounded on the notion that Klal Yisrael and each individual Jew attains true freedom only when learning and being profoundly committed to Torah.

A presentation was made to the organizers and thanks given to all those who voluntarily gave of their time, particularly Moshe Davis and Avi Yodaiken for their organizational help; Shayele Gluck, Meilech Halpern and Levi Cohen for the entertainment; and Kaspa Security and Hatzola for keeping everyone safe.

The Kiddush Hashem was further enhanced by the comments of the venue management who said that they had never seen a large crowd as polite, well-mannered and friendly as this, as well as such well-behaved children.

Benching was auctioned off by Mr. Dov Harris, and by ten o’clock the exhilarated crowd dispersed, sure that the sights and sounds of the Grand Avos Ubonim Siyum Mishnayos Melaveh Malkah will remain etched in their hearts and minds for many years to come.