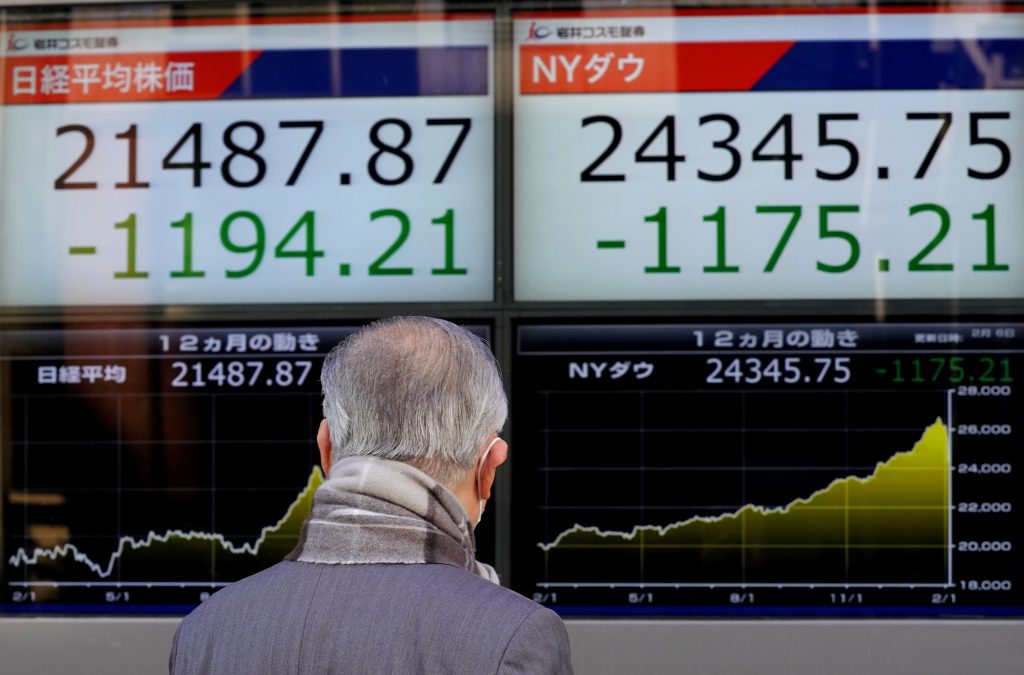 Stock markets around the world took a battering Tuesday, following a dramatic sell-off on Wall Street that triggered concerns that a potentially healthy pullback from record highs could turn into a protracted bear market.

The selling, which gathered pace Monday when the Dow Jones industrial average posted its biggest percentage decline since August 2011, has been triggered by fears the U.S. Federal Reserve will raise interest rates faster than many in the markets have been predicting in light of a pick-up in wage growth.

“If investors look at underlying earnings growth and the fundamentals of the global economy, there is reason for optimism,” said Neil Wilson, senior market analyst at ETX Capital.

“However once this kind of stampede starts it’s hard to stop.”

The selling persisted into European trading hours, though there was some sign of recovery following the initial losses at the opening bell. The FTSE 100 index of leading British shares was 1.8 percent lower at 7,206 while the CAC 40 in France fell 1.4 percent to 5,212. Germany’s DAX was down 1.9 percent at 12,441.

Though many stock indexes are close to where they started the year, the losses mark a major reverse following a sustained period of gains, a pullback that market pros have been predicting for some time.

Stephen Schwarzman, the chairman and CEO of Blackstone, warned recently at the World Economic Forum of a potential “reckoning” in markets.

A 10 percent drop from a peak is often referred to as a “correction” while a bear market is generally defined as a 20 percent or so drop in indexes. The S&P 500, for example, has fallen 7.8 percent since it set its latest record high on Jan. 26.

“Seemingly the only hope for the markets at the moment is that investors suddenly decide that the sell-off has been a bit overdone,” said Connor Campbell, a financial analyst at Spreadex.

The catalyst for the latest sell-off came in jobs figures last Friday showing that wage growth in the U.S. was creeping higher. For many traders, that was a sign that the Fed will have to pick up the pace of its rate hikes — higher wages have the capacity to fuel inflation.

Much could hinge on the open on Wall Street and futures markets are predicting a modest improvement — Dow futures and the broader S&P 500 futures are up 0.6 percent at 1.2 percent, respectively.

On Monday, the Dow finished down 4.6 percent at 24,345.75, while the S&P 500 sank 4.1 percent, to 2,648.94. Falls like this have not been registered since August 2011 when investors were fretting over Europe’s debt crisis and the debt ceiling impasse in Washington that prompted a U.S. credit rating downgrade.

Still, while stocks take a hammering, other financial assets are becoming more attractive to investors. Gold, for example, was up 0.5 percent at $1,343 an ounce.