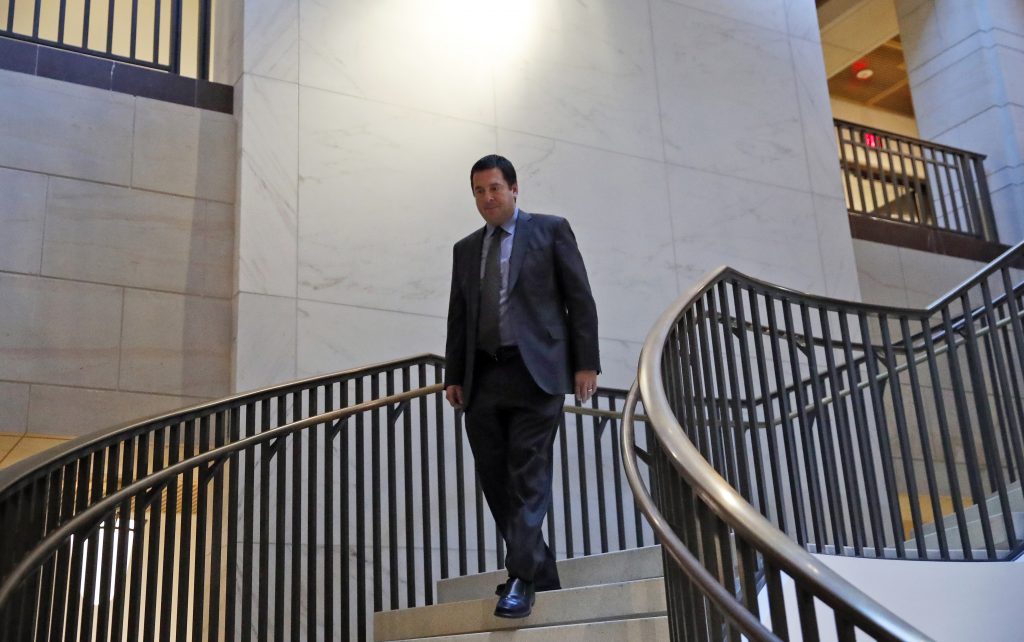 The GOP-produced memo released last week contends that when the FBI asked a secret court for a warrant to do surveillance on a former associate in then-candidate Donald Trump’s campaign, the bureau relied too heavily on a dossier compiled by an ex-British spy whose opposition research was funded by Democrats.

Critics accuse Rep. Devin Nunes, R-Calif., of abusing his power as chairman of the House intelligence committee to do the president’s bidding and undermine the investigation into whether any Trump campaign associates colluded with Russian during the 2016 election. His office rebuts that claim, saying the real abuse of power was using unverified information bought and paid for by one political campaign to justify government surveillance of former Trump campaign foreign policy adviser Carter Page.

This isn’t the first time intelligence has been politicized. Both Democrats and Republicans used the release of the so-called torture report in late 2015 outlining the CIA’s detention and interrogation program as political ammunition. In the 1960s, while intelligence agencies warned that the Vietnam War was being lost, the White House was telling the public the opposite. During the George W. Bush administration, cherry-picked intelligence about Iraqi weapons of mass destruction fueled momentum for the U.S. invasion of Iraq.

Former CIA Director Mike Hayden worries that the memo’s release will damage congressional oversight and the effectiveness of law enforcement.

“We are chiseling away at processes and institutions on which we currently depend — and on which we will depend in the future,” said Hayden, who has worked for both Democratic and Republican administrations.

Hayden, who also directed the National Security Agency, wrote an op-ed in The Cipher Brief, an online newsletter focused on intelligence issues, to urge Justice Department and intelligence professionals to speak out. He wondered, though, if they would, given Trump’s penchant for honoring loyalty.

Josh Campbell, a former supervisory special agent with the FBI who investigated counterterrorism, recently resigned to do just that. Partisan attacks undermine the agency and national security, according to Campbell, who said he disagrees with colleagues who advised staying mum until the current controversy passes.

“FBI agents are dogged people who do not care about the direction of political winds,” Campbell said in an editorial published Feb. 2 in The New York Times. “But to succeed in their work, they need public backing. Scorched-earth attacks from politicians with partisan goals now threaten that support, raising corrosive doubts about the integrity of the FBI that could last for generations.”

FBI director Christopher Wray and the second-ranking official at the Justice Department, Rod Rosenstein, had urged Trump to keep the memo classified and out of public view, but the president declined. Last week, Trump attacked both agencies through his Twitter account, saying their leadership and investigators had “politicized the sacred investigative process in favor of Democrats and against Republicans.”

Wray has defended the bureau and its agents throughout the memo controversy.

Rep. Will Hurd, R-Texas, who is a member of the House intelligence committee, said the memo is not a rebuke of the FBI rank-and-file or special counsel Robert Mueller.

Robert Litt, the former general counsel for the director of national intelligence, said the future relationship between intelligence agencies and their congressional overseers has been put at risk.

“The precedent that’s been set here is very dangerous,” Litt said. “You can only imagine if the Democrats get control of the House in the mid-year election; they will now be able to say look, ‘We’ve established a precedent here. You’ve released classified information, and we’re going to start doing it as well.'”

Democrats have prepared their own memo in response to the one Nunes released last week and have asked the committee to authorize its release.

Rep. Adam Schiff of California, the ranking Democrat on the House intelligence committee, said he too fears lawmakers will start seeking to disclose intelligence information in politically biased memos.

Schiff also worries that confidential sources could become more reluctant to provide information to U.S. intelligence agencies for fear that Congress could out them. Moreover, the American public could start wondering whether actions that law enforcement and intelligence agencies take to protect the country will be mischaracterized for political reasons, he said.

“I have to think that it’s going to have a chilling effect on what they’re willing to share with us,” he said. “It’s also going to be very demoralizing for people at the FBI to see them being used as a piñata for partisan reasons.”