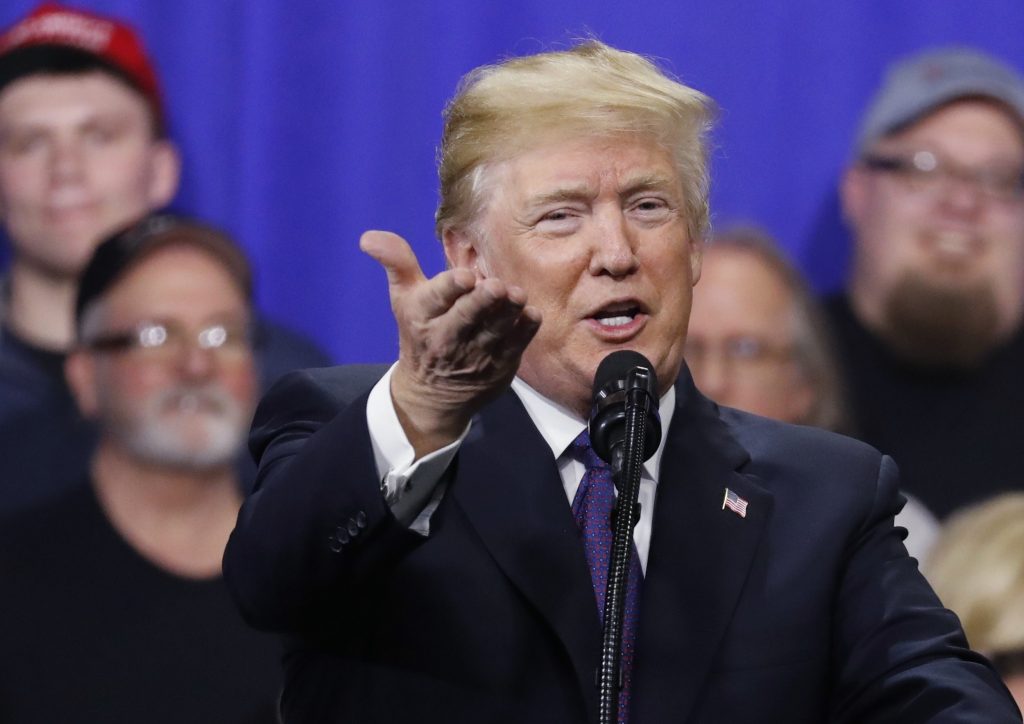 President Donald Trump accused congressional Democrats on Monday of being “un-American” and perhaps even treasonous for refusing to cheer positive news during his State of the Union address, as he turned an appearance that was arranged to promote new tax cuts into a session on bashing the political opposition.

Even as Trump celebrated the tax cuts and the economy, the Dow Jones Industrial Average took a wild ride during his nearly hour-long speech, falling roughly 1,000 points before erasing some of the losses. Trump has frequently commented on gains by the market during his first year in office, but he stayed silent on the day’s gyrations during his appearance at an Ohio company that makes cylinders.

At its close, the Dow had fallen more than 1,150 points, its largest single-day point drop, erasing its gains for the year.

Trump’s wife, Melania, accompanied him to Ohio aboard Air Force One but peeled off to visit Cincinnati’s children’s hospital. She was briefed on the state’s opioid epidemic while he pitched the tax cuts he signed into law just before the end of the year.

During what turned into a wide-ranging speech, Trump most notably criticized House Democratic leader Nancy Pelosi for describing as “crumbs” the bonuses of $1,000 or more that some companies, including the one he spoke at, are giving their workers as a result of the tax cuts.

He also accused Democrats of being “un-American” for not clapping even for positive news during his address to the nation last week, in contrast to fellow Republicans, who Trump said were “going totally crazy wild” over everything in the speech.

“They were like death. And un-American,” Trump said about the Democrats. “Somebody said treasonous. Can we call that treason? Why not?”

“They certainly didn’t seem to love our country very much,” the president said. He said Democrats “would rather see Trump do badly than our country do well.”

As for Pelosi, who represents San Francisco, Trump said: “She’s a rich woman who lives in a big beautiful house.” He said the “crumbs” talk was not a “good day” for Pelosi. He referred to her as the Republicans’ “secret weapon” and predicted his party will fare well in November’s congressional election.

Pelosi responded on Twitter, writing: “Every American should be alarmed by how @realDonaldTrump is working to make loyalty to him synonymous with loyalty to our country. That is not how democracy works.”

The president’s political broadsides contrasted with the softer touch employed by his wife on her visit to Cincinnati Children’s Hospital Medical Center, where executives briefed her on the opioid crisis in Ohio. She also visited with some patients in an activity room, handing each child a card.

“Children will always be my top priority,” the first lady said in a written statement after the visit.

That the Trumps flew together is not unusual. She has accompanied him on numerous domestic trips, to introduce him at events or as they decamp to one of their own establishments for the weekend. Mrs. Trump also joined her husband on several trips to survey damage after hurricanes slammed parts of Texas, Florida and Puerto Rico, where she sat through briefings by emergency management officials and helped console storm victims.

But Monday’s journey had a different twist in that it marked a rare instance in which she split from the president for a policy event separate from his.

As they headed out on Monday, the president and first lady chatted as they walked from the Oval Office to the helicopter that would take them to Joint Base Andrews for the flight to Ohio. She patted her husband on the back at the top of the stairs to Air Force One.

At the hospital, Mrs. Trump took a toddler in her arms briefly before moving to tables where children were making crafts and playing games.

The first lady smiled as she watched two young boys playing the game Sorry, occasionally pulling cards for them. She also sat down with Maya Baughman as the little girl showed her a play castle where she was arranging small toy figures. Nodding approvingly, Trump observed a little girl painting a watercolor.

The Dow on Monday ended up registering its biggest one-day point drop and erased all of its gains for the year.

White House spokesman Raj Shah, asked during the flight about a steep market drop on Friday, told reporters traveling with Trump that despite recent fluctuations “the fundamentals of this economy are very strong and they’re headed in the right direction,” particularly for the middle class.

Shah cited wage growth, low unemployment and the number of companies doling out employee bonuses or investing in the U.S.

“We’re very excited about the strength of our economy,” Shah said.