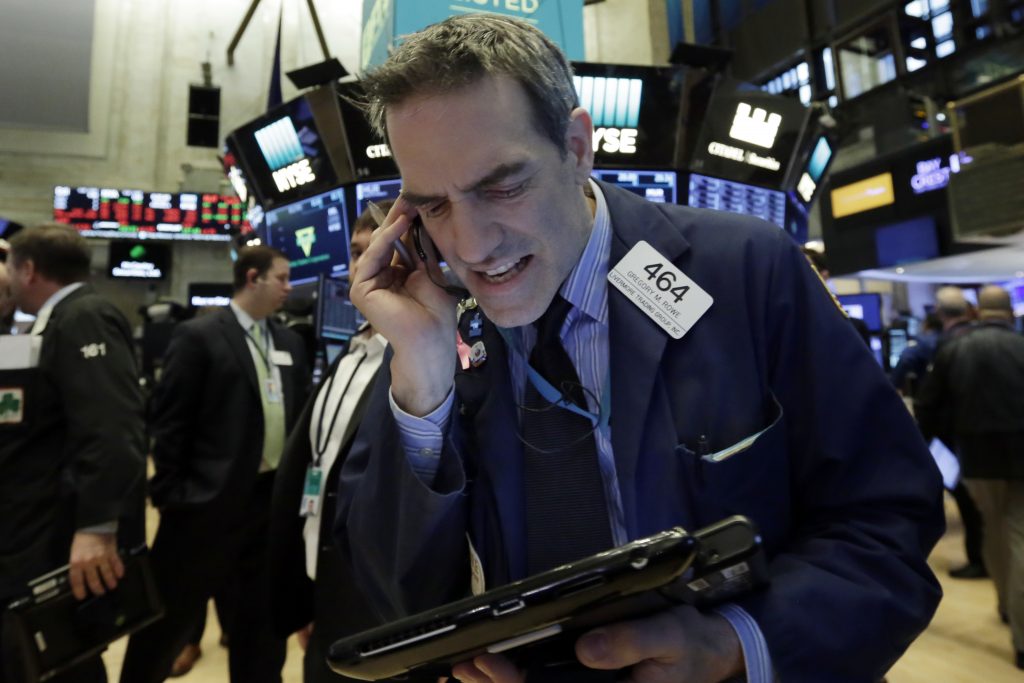 U.S. stocks are continuing to sink Monday afternoon as banks and health care and energy care companies slip. Wells Fargo is plunging after the Federal Reserve hit the bank with new sanctions over a scandal that involved opening millions of phony consumer accounts. The market erased a portion of its early losses following a mid-morning report showing more evidence of economic strength in the U.S economy. Bond yields stabilized after moving sharply higher Friday.

Investors are worried about evidence of rising inflation in the U.S. Increased inflation might push the Federal Reserve to raise interest rates more quickly, which could slow down economic growth by making it make it more expensive for people and businesses to borrow money. Rising bond yields are also making bonds more appealing to investors compared with stocks.

WELLS FARGO PLUNGES: Wells Fargo dropped $4.96, or 7.7 percent, to $59.11. Late Friday the Fed said it will freeze Wells Fargo’s assets at the level where they stood at the end of last year until it can demonstrate improved internal controls. The San Francisco bank also agreed to remove four directors from its board.

WAKING UP: The stock market has been unusually calm for more than a year. The combination of economic growth in the U.S. and other major economies, low interest rates, and support from central banks meant stocks could keep rising steadily without a lot of bumps along the way. Experts have been warning that that wouldn’t last forever, and after big gains in the first three weeks of January, that stretch might be over.

Stocks haven’t suffered a 5 percent drop since the two days after Britain voted to leave the European Union in June 2016. The market hasn’t gone through a 10 percent drop since early 2016, when oil prices were plunging as investors worried about a drop in global growth that would hurt demand. U.S. crude hit a low of about $26 a barrel in February of that year.

SWEETENED OFFER: Chipmaker Broadcom raised its offer for competitor Qualcomm to $121 billion in cash and stock, or $82 per share, and called the bid its best and final offer. It had offered $103 billion for Qualcomm, and that company says it will review the bid. Broadcom rose $4.86, or 2.1 percent, to $240.34.

BONDS: Bond prices held steady after moving sharply higher on Friday. The yield on the 10-year Treasury was unchanged at 2.84 percent.

SURVEY SAYS: Stocks perked up somewhat after a strong report for the service sector. The Institute for Supply Management released a survey that showed January was the best month for the service sector since 2005 as production, new orders, hiring and new export orders all grew faster in January. Private service companies dominate the U.S. economy and the ISM’s index has showed growth every month for the eight years.

BITCOIN WOES: Bitcoin prices and futures continued to sink. According to Coindesk, the price of bitcoin fell 13 percent to $7,082. It reached a high of almost $20,000 in December, and traded under $1,000 in early 2017. Many financial pros warn that bitcoin is in a speculative bubble that could burst anytime. On the CME, bitcoin futures plunged 15.5 percent to $7,255. They tumbled 15 percent to $7,230 on the Cboe.

GERMAN COALITION TALKS: Stocks in Europe also fell as German political parties struggled to form a government. Chancellor Angela Merkel’s conservative Union bloc and the center-left Social Democrats originally set a Sunday deadline to wrap up talks on extending their alliance of the past four years but budgeted two extra days as a precaution when formal negotiations started Jan. 26.