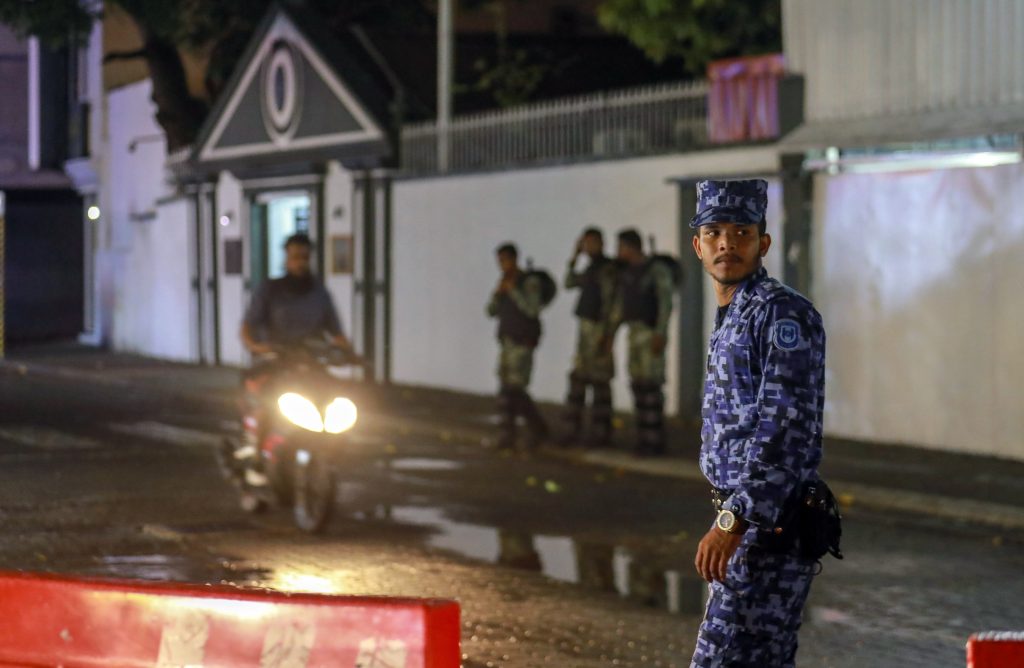 The Maldives government declared a 15-day state of emergency Monday as the political crisis deepened in the Indian Ocean nation amid an increasingly bitter standoff between the president and the Supreme Court. Hours after the emergency was declared, soldiers forced their way into the Supreme Court building, where the judges were believed to be taking shelter, said Ahmed Maloof, an opposition member of Parliament.

A surprise Supreme Court ruling last week ordering the release of imprisoned opposition leaders has led to growing turmoil, with President Yameen Abdul Gayoom lashing out at the court, opposition protests spilling into the streets of the capital, Male, and soldiers in riot gear deployed to the parliament building to stop lawmakers from meeting.

Hours after it was declared, the soldiers forced their way into the court building, Maloof said. The government did not immediately comment on soldiers going inside the building.

The president’s main rival urged people not to obey what he called an “unlawful order.”

“This declaration is unconstitutional and illegal,” former President Mohamed Nasheed, the country’s first democratically elected leader, said in a statement. Nasheed, who lives in exile, was one of the opposition leaders that the court ordered freed.

Yameen, in a statement issued after the state of emergency was announced on state television, said that “during this time though certain rights will be restricted, general movements, services and businesses will not be affected.”

Yameen, in a letter to the court released by his office earlier Monday, said the order had encroached on the powers of the state and was an “infringement of national security and public interest.” He urged the court to “review the concerns” of the government.

Officials say the court has not properly responded to a series of letters citing problems with implementing the order, including that the cases against the political prisoners are at different legal stages. A Supreme Court statement on Sunday said, “there are no obstacles in implementing the ruling … and that this has been informed to the Prosecutor General’s office.”

The Supreme Court ruled that the politicians’ guilty verdicts had been politically influenced. The ruling has led to protests by opposition supporters urging the government to obey the order. Clashes have erupted between police and the opposition supporters. Soldiers have occupied the parliament building to stop lawmakers from entering.

The United Nations and several foreign governments, including the United States, have urged the Maldives to respect the court order.

Nasheed has been living in exile in Britain since 2016 after being given asylum when he traveled there on medical leave from prison.

In addition to ordering the release of the political prisoners, the court also reinstated 12 lawmakers who had been ousted for switching allegiance to the opposition. When those lawmakers return, Yameen’s Progressive Party of the Maldives will lose its majority in the 85-member parliament, which could result in the legislative body functioning as a rival power to the president.

Known for its luxury tourist resorts, the Maldives became a multiparty democracy 10 years ago after decades of autocratic rule by the current president’s half brother, Maumoon Abdul Gayoom.

But the nation lost much of its democratic gains after Yameen, who has maintained a tight grip on power, was elected in 2013. He had been set to run for re-election this year virtually unopposed, with all of his opponents either jailed or exiled.

On Friday, Nasheed said he would mount a fresh challenge for the presidency this year. Nasheed was sentenced to 13 years in prison after he was convicted under the Maldives’ anti-terror laws. The trial was widely condemned by international rights groups.