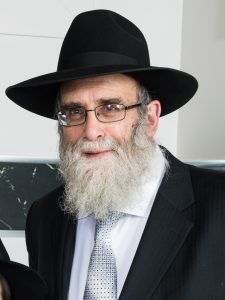 Harav Dovid Grossman, zt”l, a well-known marbitz Torah in the Los Angeles community, was niftar after being injured in a car accident in Staten Island early Monday morning. He was 72 years old.

Rav Grossman has been an integral part of Torah life in Los Angeles for decades, having first come to the city as one of the founding members of its Lakewood Kollel in 1975. Since then, he has served as a Maggid Shiur in the Yeshivah Gedolah of Los Angeles, and more recently as Rosh Yeshivah of Yeshivas Hachaim.

For many years, Rav Grossman delivered Daf Yomi shiurim, covering all of Shas, which were recorded and heavily used by those studying with the program throughout the world.

The accident occurred at approximately 4 am, Monday morning, on the West Shore Expressway in Staten Island near Victory Boulevard. Rav Grossman was transported to Richmond University Medical Center, where he was niftar shortly afterwards. Another individual reportedly suffered minor injuries and the road was closed for several hours as authorities investigated the incident.