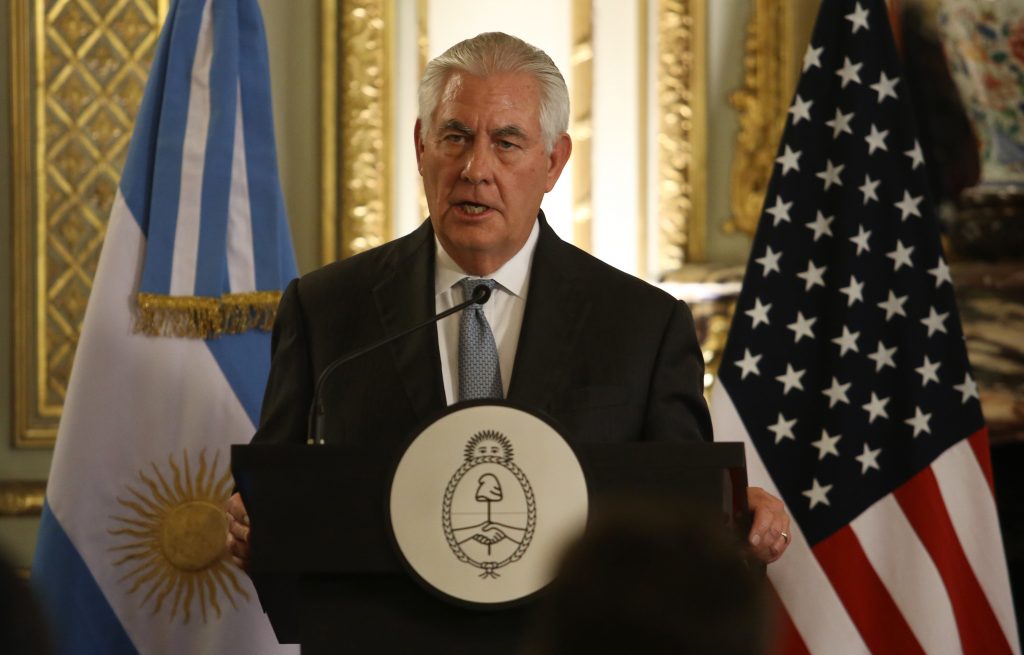 The United States is considering restricting imports of Venezuelan crude oil and exports of U.S. refined products to Venezuela, U.S. Secretary of State Rex Tillerson said on Sunday, to put pressure on socialist President Nicolas Maduro to “return to the constitution.”

“One of the aspects of considering sanctioning oil is what effect would it have on the Venezuelan people? Is it a step that might bring this to an end more rapidly?” Tillerson asked at a news conference in Buenos Aires, referring to Venezuela’s economic and political crisis.

Tillerson, on a Latin America trip that also includes visits to Mexico, Peru, Colombia and Jamaica, raised eyebrows on Friday after he suggested that Maduro could be toppled by his own military.

Restrictions on Venezuela’s all-important oil industry would represent an escalation of financial pressure on the OPEC member, which is gripped by severe shortages of food and medicine. Sanctions have so far focused on individual members of Maduro’s government and a ban on buying new Venezuelan debt.

Standing next to Tillerson at the news conference, Argentine Foreign Minister Jorge Faurie said his country would “closely follow” the possibility of oil and fuel sale restrictions, but said sanctions “must never harm the Venezuelan people.”

Other Latin American governments have said they were unwilling to take steps that would worsen the humanitarian crisis in Venezuela,

“Not doing anything to bring this (crisis) to an end is also asking the Venezuelan people to suffer,” Tillerson said.

Venezuela’s crude oil sales to the United States in 2017 were the lowest since 1991, according to Thomson Reuters trade flows data, hurt by sanctions on the OPEC nation.

Citing sources, Reuters reported last June that the Trump administration was considering sanctions on Venezuela’s energy sector, including state oil company PDVSA, responsible for most of the country’s exports.