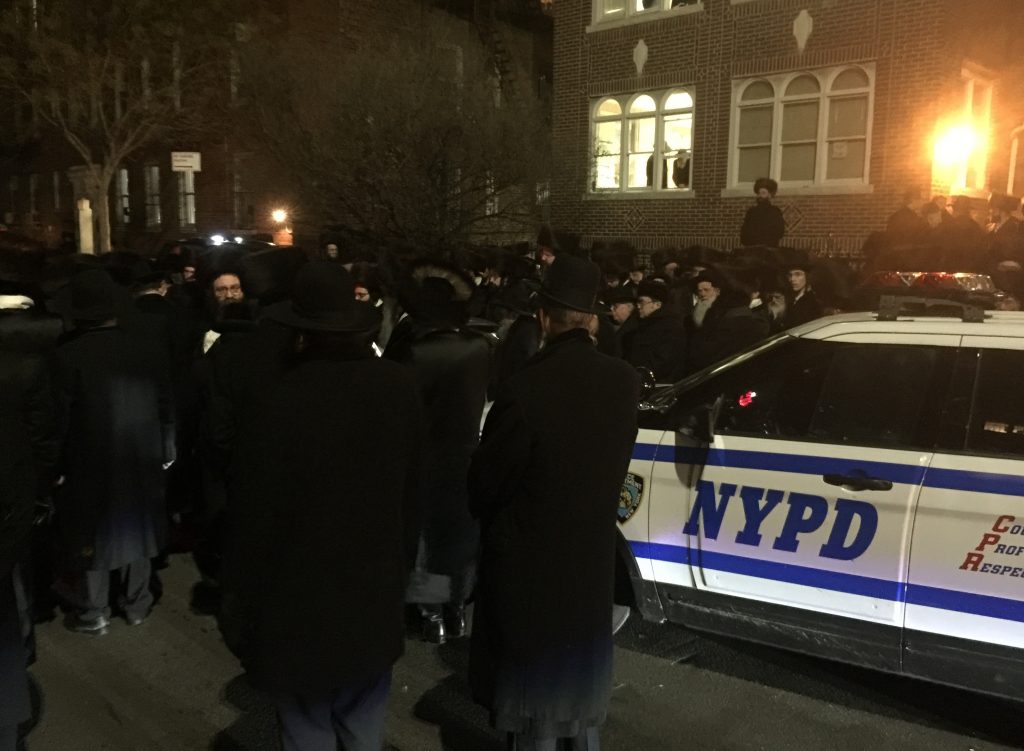 After fleeing the horrors of the Holocaust, the Rebbetzin married into the Kopyczynitzer dynasty, playing an essential role in its perpetuation. Widowed at a young age, she invested tremendous effort into raising her family and carrying on the legacy of her husband and father-in-law. A beloved teacher, principal, and chinuch mentor, she molded countless talmidos and morahs over the decades.

Rebbetzin Chanah Heschel was born in November 1936 in Vienna, the only child of Reb Tzvi Hirsch, z”l, and Raizel Brandler, a”h, who both originated from Galicia. Reb Tzvi Hirsch was the picture of the “ehrlicher Yid” of past generations. He davened Vasikin daily and recited the entire sefer Tehillim each morning before going to work. The Brandler home was one that was steeped in yiras Shamayim, leaving a life-long impression on their young daughter.

Following the Nazi takeover of Austria in 1938, the Brandlers, with great difficulty, fled to Antwerp. Less than two years later, when Nazi forces invaded Belgium, Reb Tzvi Hirsch was arrested and placed in internment camps, first in Spain and later in France. Mrs. Brandler and her young daughter followed him to France, which by that time was a Nazi-occupied country, and went into hiding. With her blue eyes and blond hair, little Chanah’le, going by the name Anita, was able to pass as a non-Jew. They endured terrible deprivation, and at one point, she was forced to beg for bread from Nazi soldiers to bring to her starving family.

Amid great danger, in 1942, the Brandlers managed to flee to neutral Switzerland. There, in keeping with the country’s refugee policy, Chanah was separated from her parents by Swiss authorities. She was subsequently sent to live with a Jewish family who used her as a personal maid, despite her being only six years old at the time. The Rebbetzin would recall having to carry heavy canisters of milk on a daily basis, but she focused on the positive aspects of the experience, saying that it got her used to hard work from a young age.

Notwithstanding the difficulties she endured, the Rebbetzin did not let such trials impede her gratitude to the Swiss for granting her family refuge from the Nazis. Several years ago, when Switzerland offered reparations to child survivors who had been forcibly separated from their parents, the Rebbetzin refused to accept the payments, saying, “they saved my life by taking me in,” and insisting that to take the money would be a lack of hakaras hatov.

In 1946, the Brandlers immigrated to the United States, settling in the Williamsburg section of Brooklyn so that Chanah, who was then 10 years old, could attend Bais Yaakov. The home maintained its high standards of Yiddishkeit with great mesiras nefesh, despite great poverty.

In later years, the Rebbetzin would tell her grandchildren that, as a child, she would receive one new dress each year and cried if a stocking tore, knowing that her parents could not afford to purchase a new one.

In 1956, the Rebbetzin married Harav Moshe Mordechai Heschel, son of the Kopyczynitzer Rebbe, Harav Avraham Yeshoshua Heschel, zy”a. She quickly became a dedicated chassidiste of her legendary father-in-law, and for her entire life always spoke about him with great reverence. This high esteem was reciprocated, as the Rebbe entrusted some of the most delicate chessed and askanus missions in which he was involved to the care of his young daughter-in-law.

Following the Rebbe’s petirah in 1967, Harav Moshe Mordechai succeeded his father, assuming the title of Rebbe of Kopyczynitz and leading his beis medrash, which by that time had moved from the Lower East Side to Boro Park. The Rebbetzin stood with great loyalty at her husband’s side, supporting his legendary chassadim.

The Rebbetzin began what would become a legendary career in chinuch as a deeply beloved elementary teacher in Bais Yaakov of Boro Park. In recognition of her unique abilities, shortly after her marriage she was hired to serve as principal of the Bais Yaakov of the Lower East Side. Despite her success in this endeavor, the Rebbetzin dedicated herself to raising her own children while they were still young.

At age 38, the Rebbetzin was herself a widow, when her husband, the Rebbe, was suddenly niftar on Pesach of 1975. She never remarried, remaining an almanah for 43 years — most of her life — and she dedicated her life to raising her family. Despite obvious challenges, with great personal strength, she led a home that her children recalled as being filled with happiness and laughter, steeped in the proud mesorah of Kopyczynitz.

After the Rebbe’s passing, many of his orphaned chassidim turned to the Rebbetzin for advice. In keeping with the dedication of the chassidus to ahavas Yisrael and chessed, the home was open to guests, and the Rebbetzin generously distributed tzedakah well beyond her modest financial means.

With great wisdom, skill, and an innate love of children, the Rebbetzin left a lasting impression on several generations of talmidos and mechanchos. She was the founding principal of Bais Yaakov of Ger, and for more than 20 years, taught educational methodology in the Bais Yaakov Seminary, molding many hundreds of future teachers.

The Rebbetzin dedicated much of each day to tefillah, davening Shacharis, Minchah and Maariv daily, with great mesirus nefesh, and frequently recited Tehillim.

The Rebbetzin had been ailing over the past year, and was niftar on Shabbos. A levayah was held Motzoei Shabbos at the Kopyczynitzer Beis Medrash in Boro Park before the aron was flown to Eretz Yisrael for an additional levayah and kevurah on Har Hazeisim.

The Rebbetzin is survived by her children, Rabbi Itchy Heschel, a noted askan, the Kopyczynitzer Rebbe, Harav Syshe Heschel, shlita, Mrs. Sarah Weiss, a famed mechaneches, and Rabbi Avraham Y. Heschel, chizuk columnist for Inyan magazine, as well as by many grand-children and great-grandchildren.