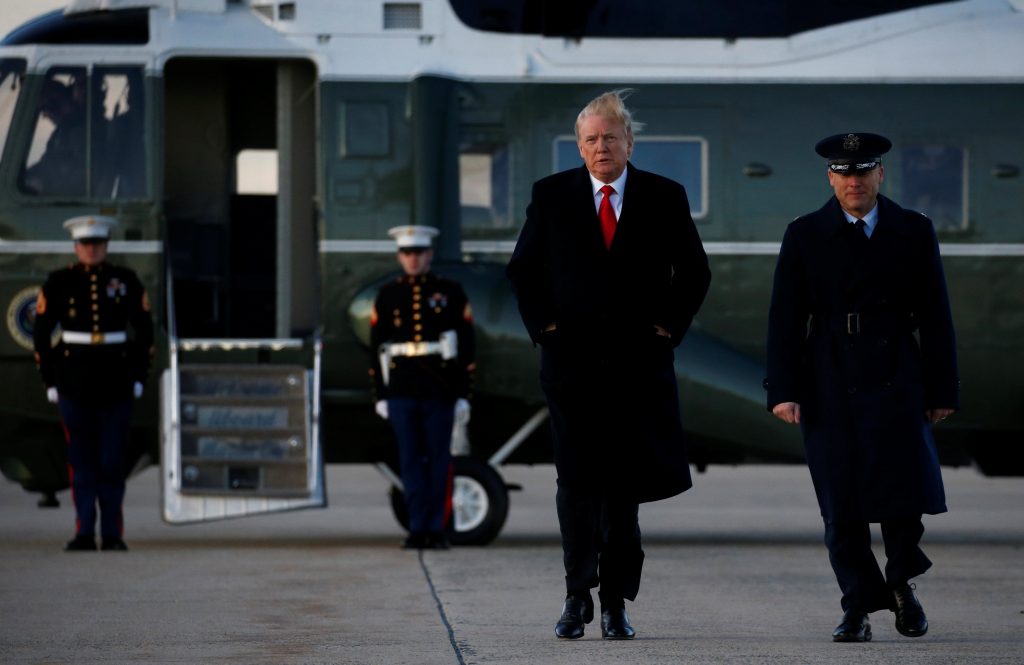 President Donald Trump said on Saturday that a controversial memo attacking federal law enforcement written by congressional Republicans vindicates him in the investigation of Russian meddling in the 2016 presidential election.

Trump’s fervent embrace of the memo raised again the prospect that he may use it as justification to fire special counsel Robert Mueller, who is conducting the investigation, or Deputy Attorney Rod Rosenstein, who oversees Mueller.

Tweeting from his resort in Palm Beach, Florida, Trump said the memo “totally vindicates” him but added “the Russian Witch Hunt goes on and on. Their (sic) was no Collusion and there was no Obstruction.” He called the investigation “an American disgrace.”

The White House told Reuters on Friday there would be no changes at the Justice Department as a result of the memo’s conclusions.

The memo, written by Republicans on the House of Representatives Intelligence Committee chaired by Devin Nunes, argues the federal investigation of potential collusion between Trump’s 2016 presidential campaign and Russia was a product of political bias against Trump at the Federal Bureau of Investigation and Justice Department.

Trump approved the release of the formerly classified memo without redactions, despite objections from the FBI in a move that deepens tension between the White House and senior law enforcement that has existed since Trump first took office.

Democrats contend the four-page memo mischaracterizes highly sensitive classified information and was intended to undermine the Mueller criminal probe that was launched in May 2017 as an outgrowth of an earlier FBI investigation.

Jerrold Nadler, the top Democrat on the House Judiciary Committee, said in a statement that Trump’s decision to allow the release of the memo was “part of a coordinated propaganda effort to discredit, disable and defeat the Russia investigation.”

Asked by reporters on Friday whether the memo made him more likely to fire Rosenstein or whether he had confidence in him, Trump replied, “You figure it out.”

Dismissing Rosenstein or Mueller would trigger a political firestorm much like the sacking of FBI Director James Comey by Trump last year.

Mueller also is examining whether Trump has obstructed justice in trying to thwart the Russia investigation.

The memo alleges the FBI concealed the Democratic ties of a source the agency used to justify surveillance on Carter Page, a former Trump campaign adviser with links to Russia. The memo revealed the names of senior FBI and Justice Department officials, including Rosenstein, who it said had signed off the surveillance.

The document was commissioned by Nunes, the Republican chairman of the House intelligence panel. He said it laid bare “serious violations of the public trust, and the American people have a right to know when officials in crucial institutions are abusing their authority for political purposes.”

Mueller’s investigation so far has led to guilty pleas by two of Trump’s foreign policy advisers to charges of lying to the FBI, and indictments of former campaign manager Paul Manafort and his business partner Rick Gates.

The Republican memo focused on court-approved surveillance of Page and said the FBI used a source who was strongly biased against Trump, former British spy Christopher Steele, to justify the action.

It alleged that a dossier of alleged Trump-Russia contacts compiled by Steele, and funded in part by Democrats, formed an “essential part” of requests to a special court to be allowed to conduct electronic surveillance on Page that began in October 2016.

Despite the memo’s charges, neither the focus on Page nor the FBI’s investigation of Trump-Russia ties began with the Steele dossier.

Page came to the FBI’s attention as early as 2013, when he met in New York with Russians who were officers of the Kremlin’s foreign intelligence service, sources have said.

The memo acknowledges that the FBI counterintelligence investigation began in July 2016, three months before the request for electronic surveillance on Page, as a result of the activities of another Trump campaign aide, George Papadopoulos.

Steve Vladeck, a professor of constitutional law at the University of Texas-Austin, said it was unprecedented for the president to feud so publicly with leaders of the U.S. intelligence agencies.

“You do long-term damage to these institutions if you convince a large swath of the American public that they can’t be trusted,” he said.