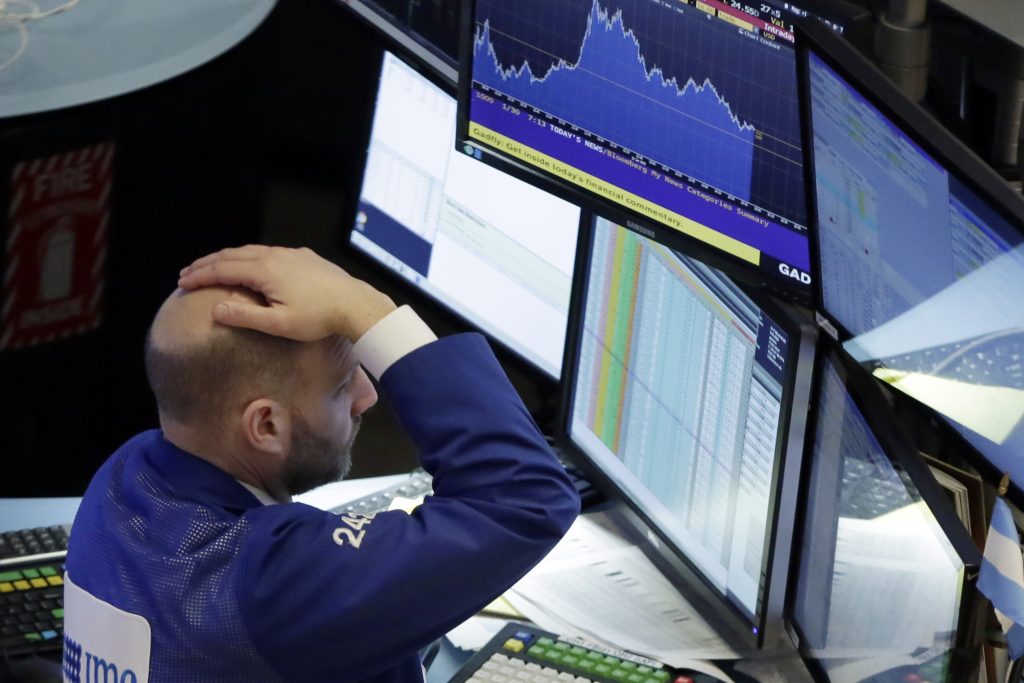 Hefty losses in health care and technology companies led U.S. stocks sharply lower Tuesday, handing the market its biggest pullback since August and its worst two-day drop since May.

The broad slide, which briefly sent the Dow Jones industrial average down by more than 400 points, erased some of the big gains the market had racked up since the beginning of the year, though the market was still on track to close out January with a gain.

“This was a market that was overbought and it was vulnerable to something pulling it back,” said Quincy Krosby, chief market strategist at Prudential Financial. “That said, we’re in the heaviest part of earnings season this week and we expect to see the majority of the reports coming out to be positive. That could be the catalyst to have buyers come in.”

Health care companies were by far the biggest losers on Tuesday. The sector finished with a loss of 2.1 percent. It’s still up 8.1 percent this year.

Insurers, drugmakers and distributors slumped following news that Amazon was teaming up with JPMorgan Chase and Berkshire Hathaway to create a company that helps their U.S. employees find quality care at a reasonable cost. The venture, whose initial focus would be on developing technology, is in its early planning stage.

HCA bucked the trend after the hospital chain posted better fourth-quarter results than analysts had expected. The stock gained $3.83, or 3.9 percent, to $101.45.

Bond prices continued to decline, driving up the yield on the 10-year Treasury to 2.72 percent from 2.70 percent late Monday. That’s the highest the rate has been since April 2014. The yield was as low as 2.04 percent last September.

Bond yields have been rising steadily over the past few months, making bonds more appealing to investors seeking income. Rising yields can also lead to higher financing costs for companies, homebuyers and other borrowers.

“With the 10-year rate shooting above 2.7 percent, the cost of capital for equity investments also just increased,” said Alexandra Coupe, associated director for Pacific Alternative Asset Management Co. “Investors are stepping back and reevaluating if their holdings can surpass this revised hurdle.”

The market sell-off comes during a week with no shortage of potential market-moving corporate news and economic data.

Several big-name companies are due to report quarterly results on Wednesday and Thursday, including Apple, Amazon, Microsoft, Facebook and Google’s parent company Alphabet.

Also on investors’ radar: Tuesday night’s State of the Union address and a two-day meeting of the Federal Reserve’s policymaking committee that wraps up Wednesday.

The Fed has signaled it expects to raise its key short-term interest rate three times this year. But some investors speculated that the growing strength in the U.S. economy and labor market could prompt the central bank to perhaps forecast an extra rate increase this year.

Major indexes in Europe declined amid investor worries that new data showing the eurozone grew in 2017 at its fastest pace in a decade could prompt the European Central Bank to wind down its monetary stimulus program earlier than expected.