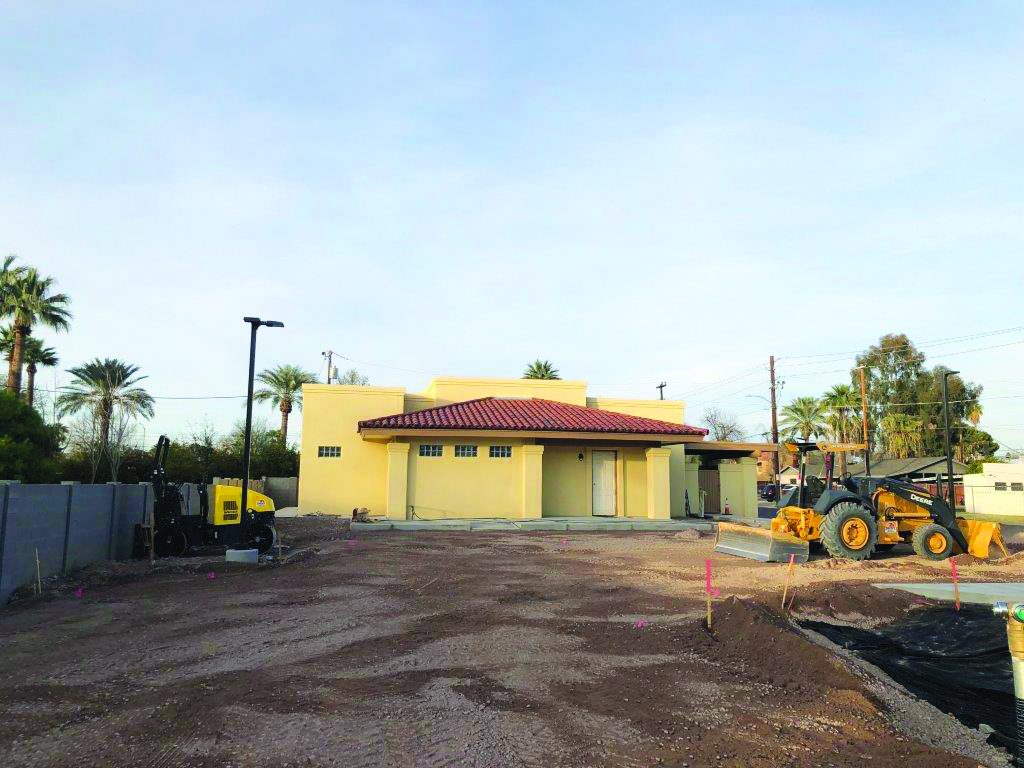 The vibrant Jewish community of central Phoenix consists of over 250 Orthodox families, two day schools, six shuls and a kollel that has been growing by leaps and bounds in the past few years.

Heimishe families have been moving to Phoenix from across the U.S., drawn by the vibrant economy, low cost of living and most importantly, a beautiful and harmonious community.

About two years ago, local Phoenix residents Rabbi Avrohom Cohen and Mr. Eliyahu Ickovic spearheaded an effort to purchase a property that would become the new Phoenix mikveh building.

As Reb Eliyahu Ickovic, the president of the mikveh explained, “Once the property was secured, an anonymous donor generously provide the founding donation to the mikveh in honor of his mother, a”h.

Slowly but surely, with the assistance of a generous grant from Mikvah USA, who has been fully participating and helping with the project, and continued assistance from the initial anonymous donor, along with many other donors, the dream of building a mikveh became a reality.

Phoenix is in one of the driest states in the U.S., and normally gets rain only during the monsoon season, usually from mid-July to late August. The plan was to have the boros ready to be filled with rainwater during the summer monsoon season; otherwise, they would have to wait an entire year. There are occasional bursts of rain in early winter, but they would never be enough to fill several pits.

Unfortunately, as the summer approached, it became clear that the project would not be completed in time.

The Tenke Rav of Boro Park, Harav Chaim Elazar Friedman, shlita, who has been spending several weeks each winter in Phoenix for years, was a guide for the mikveh throughout the entire process. He urged the committee to continue working on the mikveh, not to worry about how, and if, the boros would be filled. “Our job is to do our best; let the Ribbono shel Olam take care of the rain,” he assured the askanim.

The mikveh campaign, spearheaded by Mr. Ickovic and Rabbi Cohn, continued to gain momentum, under the guidance of noted Rabbanim and poskim including Rav Treiger of Mikvah USA, Harav Eliyahu Stern of Lakewood, Harav Elimelech Bluth of K’hal Ahavas Achim in Midwood and Harav Tzvi Yaakov Stein of Far Rockaway.

The boros were finally completed in early January.

Last week a yom tefillah took place, both in Phoenix and in communities across the United States. The children in the local day school and yeshivah k’tanah davened fervently for rain, joined by their relatives and friends in Brooklyn, New Jersey, Philadelphia, Los Angeles and beyond.

The Tenker Rav was mazkir the community as he visited the Gedolim in Eretz Yisrael and received brachos that the boros be filled.

Last weekend, the media reported the horrific toll of the mudslides in Southern California that swallowed dozens of homes The torrential rains which spawned the mudslides were limited mainly to California, but their ripple effects reached as far as Phoenix, Arizona.

As a local resident recalled, “It had been beautiful all day, with no sign of moisture, when the skies opened up in the evening. Rain began to fall, but it soon became obvious that this was no ordinary rain. We were treated to a rare flash flood, the likes of which hadn’t been seen in Arizona in the winter for many years. It rained and rained, soaking the parched ground, sending everyone scurrying inside, and filling the exposed boros to the brim.”

An hour and a bit later, the skies cleared. The rain had come and gone at exactly the right moment, a love pat from the Ribbono Shel Olam, enabling the mikveh to be filled. In fact, the committee was unprepared for the rainfall, and the furniture to actually complete the mikveh has not yet been ordered!

Once the boros were filled, however, the rest is easy; the mikveh is 90% complete, and a grand chanukas habayis is scheduled for the near future.

What a powerful lesson in emunah and hishtadlus. When we put forth our best efforts, regardless of the odds, we merit extraordinary siyatta diShmaya, above and beyond the laws of nature.

For more information about the Phoenix mikveh, please contact Rabbi Cohn at 718-809-1922.