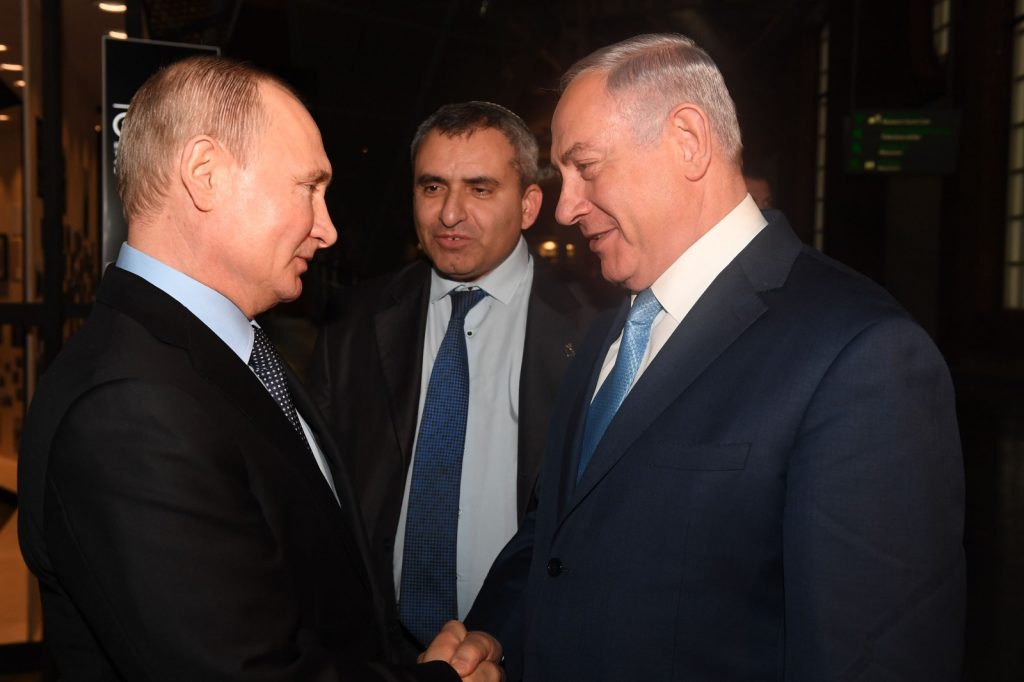 Prime Minister Binyamin Netanyahu met on Monday with Russian President Vladimir Putin in Moscow, telling him that their countries must “stand up to murderous ideology in our time.”

The comment was made during a visit to an exhibition dedicated to the 70th anniversary of the uprising at the Sobibor death camp at the Jewish Museum and Tolerance Center in the city, ahead of one of their periodic meetings on the Iranian threat to regional security in Syria and Lebanon.

“The question is: Does Iran entrench itself in Syria, or will this process be stopped? If it doesn’t stop by itself, we will stop it.

“We also spoke about Lebanon, which is becoming a factory for precision-guided missiles that threaten Israel. These missiles are a grave threat that Israel cannot accept.” He told Putin that Israel will remove them if necessary.

“I explained our policy; these are not idle words,” PM Netanyahu said. “They understand our position, they understand well the significance that we give to these threats.” However, he acknowledged that he cannot say the Russians “accepted” the Israeli position.

PM Netanyahu characterized the conversation with Putin as “frank, very straightforward, in the positive sense of the word.”

Earlier, at the museum, PM Netanyahu said: “We see here a very moving exhibition of documents from the Sobibor revolt, in which a Jewish officer from the Red Army, against all odds, led the successful breakout, the breakout to freedom.”

“I think that main lesson learned from the rise of the Nazis and afterwards the defeat of the Nazis, is the need to powerfully stand up to murderous ideology in time,” PM Netanyahu said at the museum. “That is our mission also today, that is what I want to talk to you about: our joint efforts to advance security and stability in our regions, and of course on the mutual cooperation between us, between Russia and Israel.”

Pres. Putin noted the historical tie that the Russian and Jewish people have through their suffering in World War II, during which six million Jews and some 20 million Russians were killed.

“A special thank you that you agreed to have the meeting today here, in particular,” Pres. Putin said, according to a Hebrew translation of his statement provided by PM Netanyahu’s office.

Prior to boarding the plane to Moscow on Monday morning, the prime minister said that he would discuss with the Russian president “Iran’s attempt to turn Lebanon into one large missile site, a site for manufacturing precision missiles against the State of Israel, which we are not willing to tolerate.

“We meet periodically in order to ensure the military coordination between the IDF and the Russian forces in Syria; as of today, this has succeeded and it is important that it continue to succeed.

“I will discuss with President Putin Iran’s relentless efforts to establish a military presence in Syria, which we strongly oppose and are also taking action against.”

On Sunday, Syrian President Bashar al-Assad told Pres. Putin to pass on the message that “if Israel attacked targets in the country again, Syria would respond by firing missiles at Ben Gurion Airport.”

Pres. Putin promised to pass the message to Israel, and he and PM Netanyahu are expected to discuss the issue during their meeting.

Russian President Vladimir Putin gets out of a car during a visit to the Jewish Museum and Tolerance Center, Monday. (Reuters/Maxim Shemetov)

Minister Elkin said that “from past experience, every such meeting has made a very important contribution to Israel’s security.

“Today Netanyahu is the only leader in the world who manages to maintain a very good relationship with the president of the United States and the president of Russia at the same time,” Elkin quoted from the Russian newspaper Kommersant.

Prime Minister Netanyahu’s comments on Lebanon are seemingly connected to an article published in the Arab media Sunday night by IDF Spokesman Ronen Manlis, in which he called on Lebanese citizens to keep an eye on the Iranian takeover and warned that “Lebanon is being turned into an act of failure by the Lebanese authorities. One big one.”