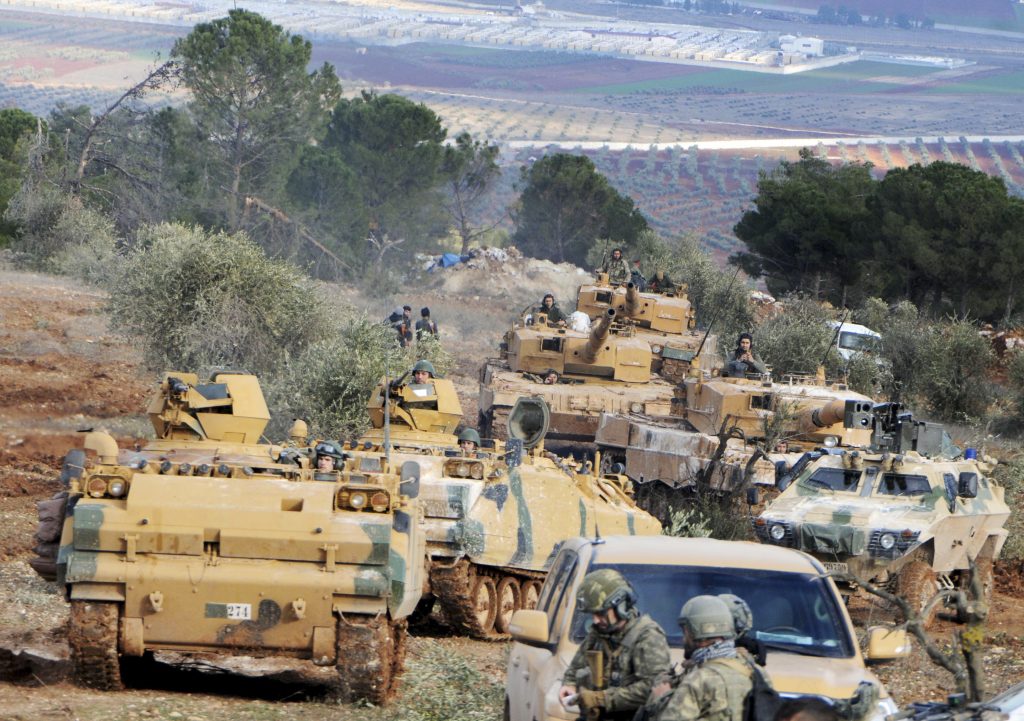 Renewed clashes erupted on Monday on a strategic hilltop in northwestern Syria captured by Turkish troops the day before as Syrian Kurdish militiamen were trying to reclaim it.

Turkish military officials canceled a government-organized press tour to Bursayah Hill, separating the Kurdish-held enclave of Afrin from the Turkey-controlled town of Azaz, due to what they described as “security concerns.”

In Syria’s province of Idlib, activists said at least 11 people were killed on Monday and a hospital was badly damaged and rendered unusable in suspected Syrian government airstrikes on the opposition stronghold.

The Turkey-backed offensive against the Syrian Kurdish enclave Afrin and the violence in Idlib have overshadowed a peace conference hosted by Russia due to open on Monday between the Syrian government and the opposition.

The main Syrian opposition negotiating body has boycotted the conference. The powerful Kurdish militia that is fighting in Afrin and controls about 25 percent of Syria’s territory is also not attending, saying it holds Russia, the host, responsible for the Turkish offensive.

The Turkish incursion began on Jan. 20, with Ankara saying it seeks to drive “terrorists” away from its border and create a safe zone in the area. Turkey considers the local Syrian Kurdish militia in control of Afrin, the People’s Defense Units or YPG, an extension of its own insurgency.

The Turkish government has not tolerated criticism of the offensive.

An Interior Ministry statement Monday said authorities detained 311 people for allegedly engaging in “terrorist propaganda” through social media postings critical of the Afrin offensive. The Ministry said the suspects, who are accused of supporting Syrian Kurdish militia, were detained in the past week but did not provide further details.

The Paris-based media watchdog Reporters Without Borders has criticized the detentions last week as a government “witch hunt against critics.”

The capture of Bursayah Hill was Turkey’s top achievement since the start of the Afrin offensive. The operation has so far claimed the lives of more than 50 civilians in Afrin, three in Turkish towns along the border as well as five Turkish soldiers.

Turkey’s president and the military had announced the hill’s capture on Sunday, after days of intense fighting. The Turkish forces and Syrian rebels allied with them have met stiff resistance in their attempts to advance on Afrin.

The Syrian Observatory for Human Rights said the fighting on Monday was concentrated on the edges of the hill.

Also on Monday, the Observatory said Turkish airstrikes have once again hit near Afrin’s main dam, for the third time since the offensive began. There were no reports of damage to the dam, which provides water and electricity to the Kurdish enclave, home to hundreds of thousands of people.

In nearby Idlib, the local White Helmets rescuers said Monday’s airstrikes hit the province’s largest vegetable market, in the town of Saraqeb.

The Observatory also reported the attack, and said a local hospital was also hit, putting it out of service. The activist Idlib Media Center posted photographs of the exterior of the damaged building.

A day earlier, at least 17 civilians were killed in airstrikes in Idlib.