National NAFTA Talks That Were Supposed to End Last Year, Might Continue Into 2019
National 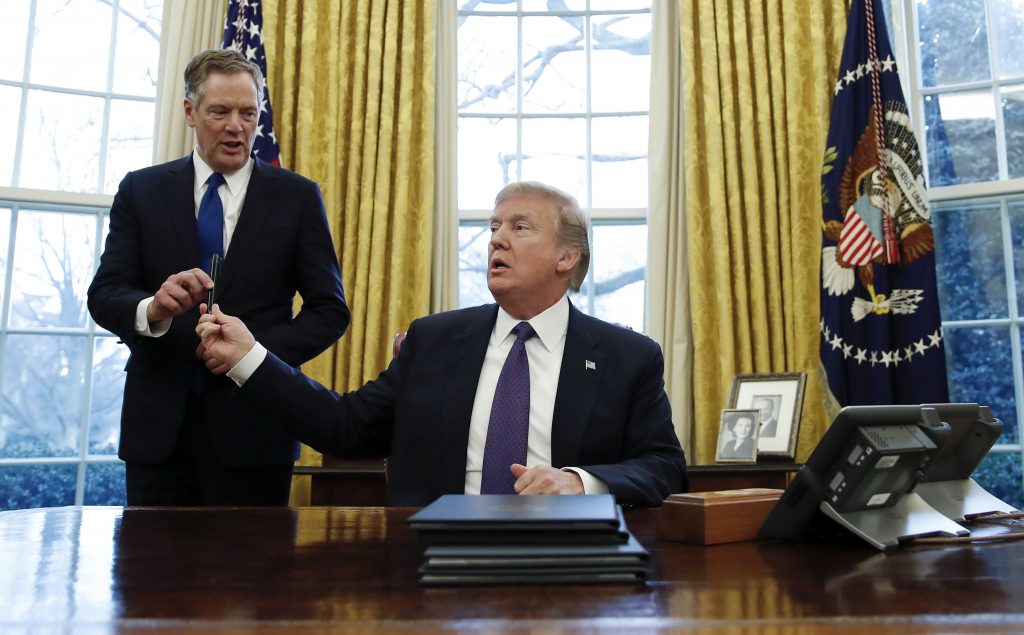 Talks aimed at reaching a new trade agreement involving the United States, Canada and Mexico are expected to continue for months beyond a March 31 deadline and could even extend into 2019, according to industry executives and others close to the negotiations.

The delay means that the contentious three-way bargaining, involving lucrative markets and issues of national sovereignty, may collide with elections later this year in both Mexico and the United States.

It also raises the prospect that President Donald Trump could complete his first two years in the White House without fulfilling his campaign promise to scrap the North American Free Trade Agreement, or reach a better deal.

“We’re worried about it going into 2019,” said Brian Kuehl, executive director of Farmers for Free Trade, which supports the treaty.

Trade ministers from the three countries are scheduled to meet here on Monday to take stock of the situation.

The Trump administration set an ambitious schedule last summer when it announced plans to renegotiate the 1994 agreement, which the president has repeatedly criticized as unfair to the U.S. and threatened to quit.

Negotiators’ original goal of a deal by the end of 2017 slipped to March 31 after several rounds of talks made little progress. Mexican officials are reluctant to negotiate much beyond that point with a July 1 presidential election looming.

Negotiators meeting here in a downtown hotel have advanced this week on key issues including rules affecting the auto industry and the settlement of investor disputes. The atmosphere around the negotiations, previously soured by U.S. irritation at Canada’s resistance to discussing those issues, also has improved. For now, the American threat to abandon the talks appears to have receded.

But none of the main stumbling blocks have been resolved, leaving substantial work for subsequent meetings that are tentatively planned in Mexico City at the end of February and Washington the following month.

One U.S. trade official, who asked for anonymity in order to discuss confidential discussions, said that the amount of work remaining meant that it “won’t be surprising if the talks continue” beyond the end of March. The Canadian government always has rejected the idea of “an arbitrary deadline” for the talks, a spokesman said. A Mexican spokesman did not respond to a request for comment.

The slow pace could force Mr. Trump to ask Congress for an extension of his so-called “fast track” negotiating authority, which expires at the end of June.

Many observers now anticipate a pause in the talks after March that would defer the most difficult bargaining until after the Mexican vote. The aim would be to secure agreement on less contested parts of a new treaty along with a roadmap for reaching a complete text before breaking to allow Mexicans to choose a new president.

“We’re hoping for the end of March to have a statement of principles that allows the president to say, ‘I have Canada and Mexico over a barrel, I just need more time,'” said Dan Ujczo, a trade attorney with Dickinson & Wright.

On Friday, Andres Manuel Lopez Obrador, the leftist front-runner in the Mexican presidential contest, called for a pause in the negotiations until after the voting.

Further delay raises the possibility of the talks continuing during the run-up to the U.S. congressional elections. Lori Wallach, director of Public Citizen’s Global Trade Watch, suggested the president needs to reach a deal before the midterms to demonstrate to his working-class base that he has kept his promises on trade. Otherwise, Democrats could tell voters “you’ve been taken for a ride,” she said.

But Mr. Trump already has ramped up his trade offensive, levying tariffs on imported solar panels and washing machines and eyeing additional measures against China. Leaving the treaty in limbo until after the November mid-terms could work in his favor, other executives and trade analysts tracking the talks said.

Rather than defend a complex deal containing inevitable trade-offs, the president could simply reiterate on the campaign trail that he is seeking a better deal for working Americans.

“Once he negotiates a deal, he owns it,” said one trade association executive who requested anonymity because they were not authorized to speak to the press.

Earlier this month, Mr. Trump said in an interview with the Wall Street Journal that he was sensitive to Mexican concerns about negotiating during the final stages of their presidential campaign and would be “flexible” on the negotiating timetable. But the mercurial president also repeated his threats to terminate the existing agreement unless Mexico and Canada offer concessions that would return some lost manufacturing jobs to the U.S.

“They’re not near resolution stage,” says Celeste Drake, the AFL-CIO’s trade and globalization policy specialist. “If you rush, that’s when you get bad outcomes.”

Still, the protracted uncertainty is causing some angst. The Canadian Cattlemen’s Association showed its frustration by circulating a mock “Missing” poster for economist Greg Doud, whose nomination to become chief U.S. agricultural negotiator is stalled, leaving him sidelined from the talks.

Mr. Trump’s threats to withdraw from NAFTA have prompted Mexico and Canada to look for alternative suppliers for products that they currently buy from U.S. companies. Mexico has accelerated imports of corn from Brazil in a move some in the U.S. see as a warning of what would happen if the deal collapses.

“U.S. farmers are marketing their products in an uncertain climate,” said Darci Vetter, former chief U.S. agriculture negotiator, and now a consultant to the farm industry group. “There is a cost to taking a long time to get there.”