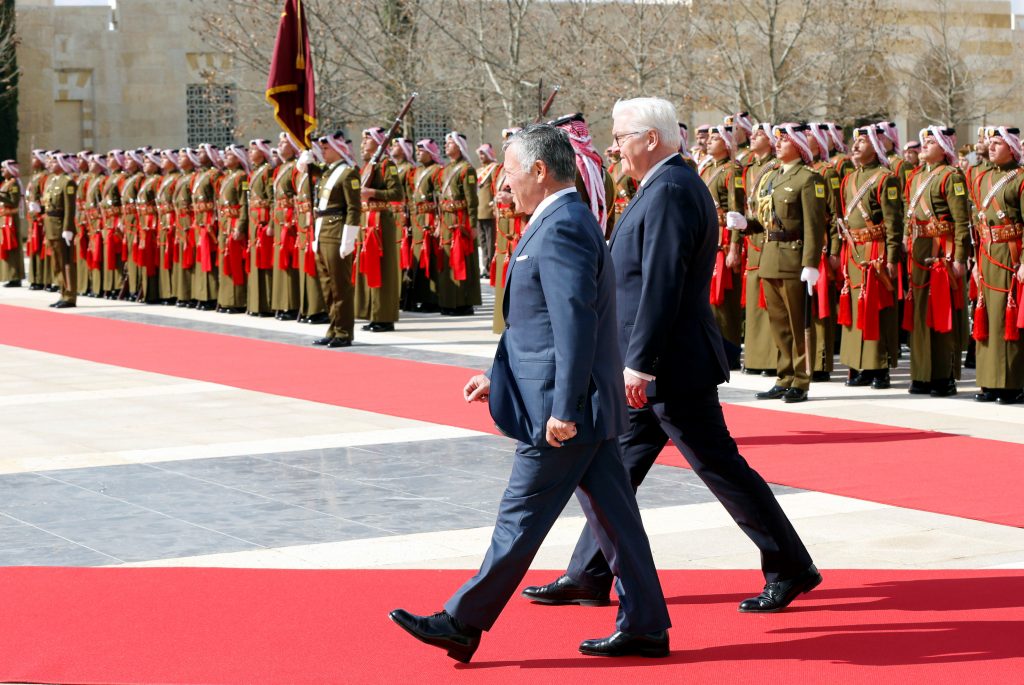 Jordan’s king affirmed his support Sunday for establishing a Palestinian capital in east Jerusalem, highlighting his differences with the Trump administration on a central issue in the Israeli-Palestinian conflict.

Abdullah II spoke at the start of a meeting with German President Frank-Walter Steinmeier, who also expressed concern about President Donald Trump’s recognition last month of Jerusalem as Israel’s capital.

“I think there are very good reasons to question the theory that unilateral recognition of Jerusalem as the capital of Israel would contribute to the consolidation of peace in the Middle East,” Steinmeier was quoted as telling the Jordanian daily Al-Ghad in an interview published Sunday.

One of the pillars of Germany’s position on the Israeli-Palestinian conflict “is the need to preserve the status of holy sites and to negotiate the final status of Jerusalem within the framework of the two-state solution,” Steinmeier, a former foreign minister, told Al-Ghad.

Jordan’s monarch serves as custodian of a major Muslim religious site in Yerushalayim and the kingdom’s Hashemite dynasty derives much of its political legitimacy from its special role in Yerushalayim.

“I think our views on Palestine and Jerusalem are well known to you,” the king told the German president Sunday. “We do believe in a two-state solution, with (east) Jerusalem as a capital for the Palestinians.”

At the same time, Jordan is a staunch U.S. ally and a major recipient of U.S. economic and military aid.

Abdullah has stopped short of siding with Palestinian leader Mahmoud Abbas who said after Trump’s policy shift on Jerusalem that Washington can no longer serve as the sole mediator between Israelis and Palestinians.

U.S. officials have stressed repeatedly that the Jerusalem recognition has no impact on negotiations over the borders or sovereignty of the holy city.

Steinmeier is on a four-day visit to Jordan and Lebanon.

On Monday, he is to visit the Azraq camp for Syrian refugees in northern Jordan and a nearby air base by the same name where some 300 German troops are stationed as part of the U.S.-led international military campaign against Islamic State group extremists in Jordan.

Germany, which has absorbed hundreds of thousands of Syrian war refugees, has stepped up efforts in recent years to help improve conditions for refugees in regional host countries.

About 660,000 registered Syrian refugees live in Jordan, though Jordanian authorities say the actual number is double that.