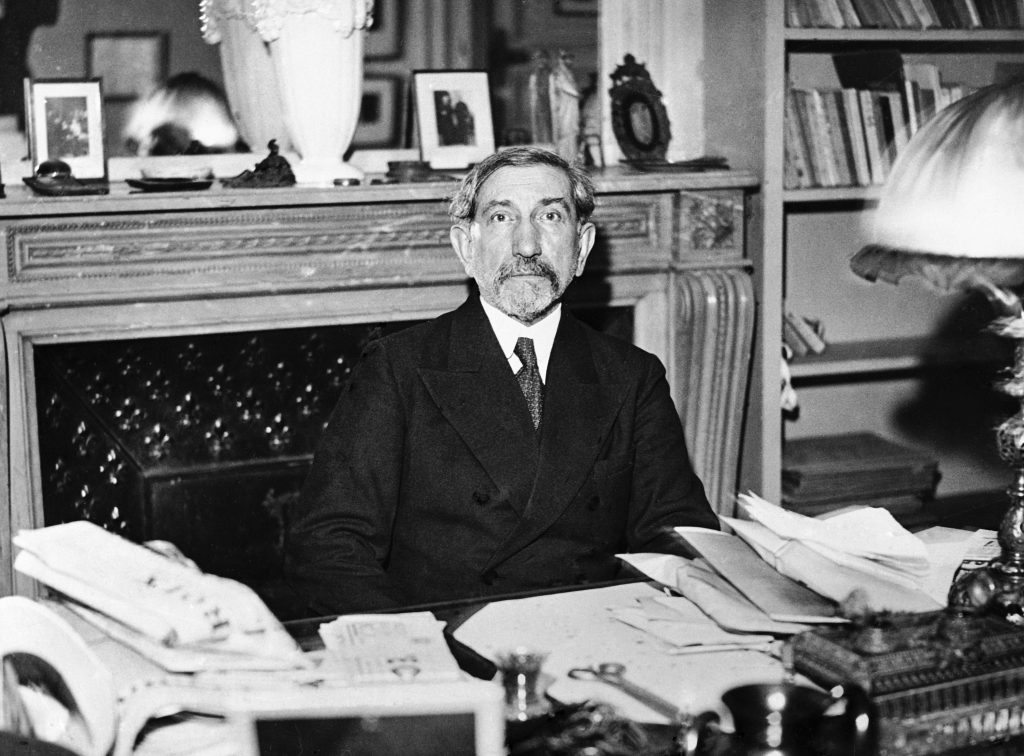 The name Charles Maurras evokes the darkest currents of the French past: strident nationalism and obsessive anti-Semitism. This, after all, was a man who advocated denying Jews citizenship because — to him — they could never be anything but traitors.

Despite this legacy, the French government included his name in the 2018 edition of the National Commemorations, an annual project to mark the anniversaries of notable figures and events. Maurras, for instance, was born in 1868, 150 years ago. In the text, he is described as an “emblematic and controversial figure.”

Following swift, sharp fallout over the weekend, Françoise Nyssen, France’s minister of culture, announced Sunday that the entire press run of the 2018 commemorative books will soon be recalled and reprinted without mention of Maurras. Her decision, she said in a statement, was meant to “remove the ambiguity” that was “likely to divide French society.”

For many, however, there was no ambiguity in the first place.

“Maurras was until the end of World War II the most prominent anti-Semite in France and the Number One enemy of liberal democracy,” said Zeev Sternhell, an expert in the history of French fascism and an emeritus professor at the Hebrew University of Jerusalem, in an emailed statement.

“He was the intellectual leader of French hard nationalism until the end of Vichy. It was no accident that he had been sentenced to life in prison,” Sternhell said, referring to the French regime that collaborated with Nazi Germany in World War II.

For his wartime activities, which French authorities saw as “complicity with the enemy,” Maurras was sentenced to life imprisonment in 1945. But that was far from his first indictment. In 1925, he was convicted of inciting death threats against then-Interior Minister Abraham Schrameck, a Jew. In 1936, he was convicted of doing the same against Léon Blum, France’s first Jewish prime minister. In February of that year, a group of Maurras’ allies bludgeoned Blum nearly to death in the streets of Paris.

Frédéric Potier, head of the French government’s interministerial delegation against racism and anti-Semitism, berated the Culture Ministry over the weekend for including Maurras in the commemoration project.

“To commemorate is to pay homage,” he wrote Saturday on Twitter. “Maurras, an anti-Semitic author of the extreme right, has no place in the national commemorations of 2018.” Potier’s criticisms were echoed by politicians from across the political spectrum.

For historians, Maurras is the incarnation of France’s native, homegrown anti-Semitism, a fixture of public discourse throughout the 19th and early 20th centuries. During the Dreyfus Affair, when Alfred Dreyfus, a French Jewish military captain, was wrongly accused of treason, Maurras seized the opportunity to call for what he called “state anti-Semitism.” His views did not change when Dreyfus was eventually exonerated in 1906.

“For Maurras, a Jew could not have French nationality, and Jews could not become civil servants, serve in the military, become justices, etc. — that was the logic of ‘state anti-Semitism,'” said Laurent Joly, an expert in the history of French anti-Semitism and the author of a recent book on Maurras and the Action Française, a far-right organization and publication of which he was the center. “A Jew by definition was a traitor, and could not be French.”

In the France of 2018, what might at first seem an obscure development in the world of literary politics is anything but.

The nation’s wartime actions — especially the role of French authorities helping the Nazis deport some 76,000 Jews to Nazi death camps — is at once a matter of quiet resentment and intense public debate.

In the 2017 presidential election, Marine Le Pen, the leader of the far-right National Front and the daughter of convicted Holocaust denier Jean-Marie Le Pen, repeatedly suggested that the French should no longer be made to atone for the sins of the past. A significant portion of voters seemed to agree: In the end, roughly 34 percent backed Le Pen in the final round.

Violent anti-Semitic incidents are also common in modern France, mostly in North African and West African immigrant communities. Just this month, a kosher supermarket was firebombed in the Paris suburbs.

But even in the realm of letters, this latest affair is not an isolated one. It comes on the heels of a similar national scandal last month after the publishing house Gallimard announced its plan to reissue the virulently anti-Semitic pamphlets of the novelist Louis-Ferdinand Céline. Following tremendous blowback from Jewish groups, as well as from Potier’s office, that plan was similarly abandoned.

The Maurras scandal is not the first time that the National Commemorations have come under fire. In 2011, the list included Céline, who died in 1961 and whose anti-Semitism was so extreme that he advocated the extermination of the Jews before the Nazis invaded France, much less before the Holocaust began. At the time, the famous Nazi-hunter Serge Klarsfeld, now 82, led the charge against Céline’s inclusion, just as he did Gallimard’s attempt to republish the author’s infamous pamphlets last month.

In the case of Maurras, Klarsfeld said there was an important distinction to draw.

“Maurras was in favor of the anti-Semitism of exclusion and not of extermination,” he said in an email. “Unlike Céline, who publicly advocated in 1937 the extermination of the Jews and total collaboration with Hitler’s Germany, Maurras seems more distant in time and more moderate.”

“With temporal remoteness, it is difficult if not impossible to oppose saints, kings, political leaders, great artists or men of science who were hostile to the Jews in past centuries and who brought to France a deserved glory. Did we not just commemorate the 500th anniversary of Martin Luther?”

For others, Céline, despite his anti-Semitic views, was also a brilliant writer who left behind greatly admired novels. Maurras, they say, made no such contribution.

“He left France’s literary patrimony no major work, having devoted most of his life to the daily political struggle,” Joly said. “To include Maurras, it’s an absolute embarrassment.”