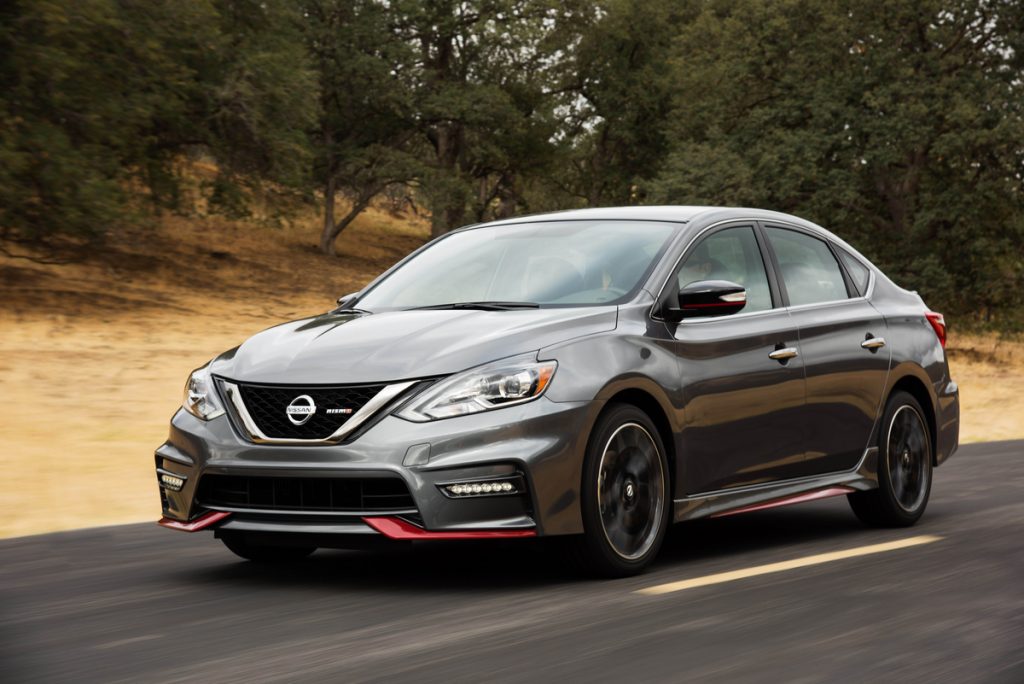 Nissan’s compact Sentra sedan, which got extensive updates two years ago and the addition of a NISMO motorsports version just last year, returns for 2018 with a few enhancements.

Also continuing for 2018 is the SR Midnight Edition Package introduced in the middle of the 2017 model year.

Changes for 2018 include making Automatic Emergency Braking standard on all but the manual-transmission and NISMO models; the RearView Monitor and five-inch color display with streaming audio and Siri Eyes-Free are now included on base S models; 16-inch aluminum-alloy wheels are standard on the SV; dual-zone automatic climate control is included on SV models and higher; and radar cruise control is standard on SR 1.8L and SL models.

The base engine remains the normally aspirated 1.8-liter inline four-cylinder with 130 horsepower and 128 foot-pounds of torque, with either the six-speed manual or continuously variable (Xtronic) automatic transmission.

The Sentra NISMO comes with a turbocharged 188-horsepower 1.6-liter direct-injection four-cylinder engine with 177 foot-pounds of torque and the choice of either a six-speed manual or sport-tuned Xtronic transmission at no extra charge. We had the automatic on our tester.

Sentra NISMO – short for “Nissan Motorsports” – is the most-expensive model in the lineup, but you can get the same engine from the NISMO in the SR Turbo version, also new last year, for about $3,500 less.

This engine adds significant power to the Sentra, making it a lot more fun to drive. The turbo boost is very smoothly applied, with no turbo lag and no sign of torque steer in the standard front-wheel drive. Passing on two-lane country roads is a breeze in this car.

This was the first NISMO application for a mass-market Nissan sedan, joining an elite group that also includes NISMO versions of the GT-R and 370Z sports cars, as well as the Juke NISMO and Juke NISMO RS subcompact crossover utility vehicles.

That 188 horsepower doesn’t come close to putting the Sentra NISMO in the same class as the Nissan sports cars, but it does spice up an otherwise sedate small sedan. That gives the Sentra a boost over key competitors such as the Toyota Corolla and Hyundai Elantra.

The Sentra NISMO looks good, too, thanks to its aggressive exterior styling. It has the signature NISMO “layered double wing” design in the front, side and rear lower body panels. There is a thin red stripe that runs along the lower body panels.

Nissan says the Sentra NISMO’s body was designed to hold to the ground 30 percent better than the regular Sentra, thanks to the unique rear spoiler and rear bumper design.

Other touches include unique side sills, a NISMO rear fascia and exhaust finisher, dark chrome door handles and trunk finisher, and black NISMO outside mirror caps with integrated turn signals and the signature NISMO red stripe.

This car looks great inside, too, thanks to its performance-oriented interior, and it has unique suspension tuning for sportier handling – but at the expense of a smoother ride for the passengers.

The interior is charcoal with red accents, and there are unique bolstered front bucket seats with NISMO logos. The rear seat has cloth upholstery with red contrast stitching.

Red motorsports-inspired trim accents are used throughout the interior, including on the unique Alcantara leather-wrapped steering wheel, the start button (with red ring), and the meter cluster with a red tachometer. There are also red accents on the leather shifter knob and NISMO embroidered carpets. A dark headliner and NISMO logo on the instrument panel are also unique.

The NISMO Premium Package, which cost an extra $1,220 last year, is now included in the base price, and there are no available options for the NISMO Sentra. This package includes a Bose Premium audio system with eight speakers, along with NissanConnect with Navigation and Mobile Apps and a 5.8-inch color touch-screen display.

The Sentra’s electric power steering has also been specially tuned on the NISMO model to allow for precise control, especially helpful on twisty country roads.

Highlights: Significantly updated just two years ago, the Sentra last year got its first NISMO turbocharged performance model, along with a less-expensive SR Turbo model with the same engine. Besides having great styling and fuel economy, this is a surprisingly delightful car to drive, especially with the NISMO treatment.

Negatives: Back seat a tight fit for three people (common in this segment).