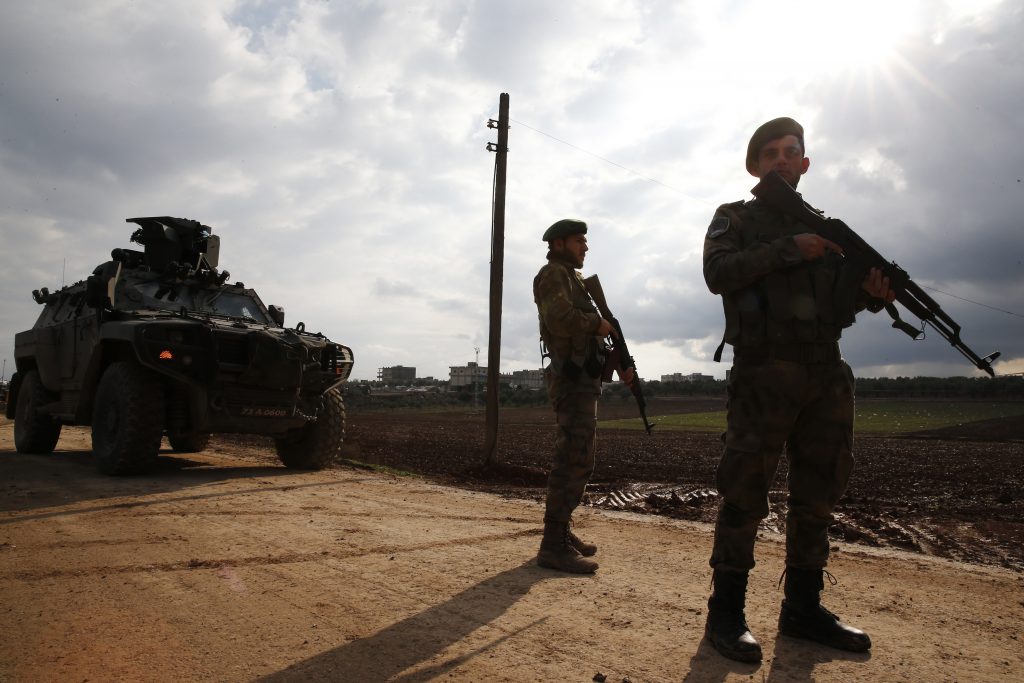 The bombardment could be heard a few miles away from Afrin in the Turkish-controlled town of Azaz, where Associated Press journalists were on a media trip organized by the Turkish government and escorted by Turkey-backed Syrian opposition fighters taking part in the offensive.

Azaz is one of the fronts from where Turkish troops and allied Syrian fighters of the so-called Free Syrian Army have launched a push into Afrin to clear the area of a Syrian Kurdish militia which Ankara considers to be a national security threat. The militia known as the People’s Protection Units, or YPG, has been a partner of the United States in the fight against the Islamic State group in Syria.

Kurdish and other activists said Saturday’s fighting concentrated around the Rajo area in Afrin, amid heavy shelling and airstrikes by the Turkish forces. The Britain-based Syrian Observatory for Human Rights, which monitors the Syria war through a network of activists on the ground, said Turkish helicopters were attacking the town of Rajo, struggling to make progress after a week of attacks.

Turkey’s official news agency said rockets fired from the Afrin region in Syria hit a house in the border province of Kilis, injuring two people. Another rocket fired and struck the town of Reyhanli, in Hatay province, slightly injuring one child, the Anadolu news agency reported.

The Turkish military said in a statement that two Turkish soldiers and two allied Syrian fighters were killed Saturday. It claimed 447 YPG militants were “neutralized” since Jan. 20.

AP journalists saw a checkpoint in the village of Maarin, manned by local security trained and equipped by Turkey.

In nearby downtown Azaz, about 22 kilometers (14 miles) from Afrin, people were going about their daily lives and stores were open, but armed men were keeping a watchful eye. In the town briefly controlled by the Islamic State group at one point and a rebel bastion since 2014, children now waved Turkish flags for their journalist visitors.

Syrian local security forces wore recycled Turkish uniforms, some with the word POLIS written on them.

The boom of continuous shelling and YPG watch points in the distance were a reminder that the frontline with Afrin was near.

A local policeman in Azaz told the AP that Kurds in Afrin were shelling the towns of Azaz and Marea, which have been under Turkish patronage since its 2016 cross-border operation to limit Kurdish expansion and clear IS from its border.

The Turkish offensive has strained ties between Turkey and the U.S., which has expressed major concerns over the Afrin attack. Turkey has vowed to expand its operation against the YPG to other areas along the border including Manbij, where some U.S. troops are stationed. Ankara views the YPG as a major threat because of its links to Kurdish insurgents in Turkey known as the PKK.

On Saturday, Turkey’s foreign minister said his country wants to see “concrete” steps from the United States to re-establish trust between the two NATO allies. These steps, Mevlut Cavusoglu said, include severing U.S. ties with the YPG, stopping their armament and taking back weapons it has supplied them with, as well as pressing for their withdrawal from Manbij.

Cavusoglu claimed that U.S. National Security Adviser H.R. McMaster confirmed in a phone call with the Turkish president’s spokesman late Friday that the U.S. will no longer arm the Syrian Kurdish fighters.

However Cavusoglu criticized the U.S. for sending conflicting messages and said: “The President says something, the Pentagon says something else. There are people, U.S. soldiers, who are interweaved with them … (YPG) in the field and they say something else.”

Separately, Syria’s main opposition negotiating body said it will boycott a peace conference in Russia next week, saying it would not lead to a genuine peace track that could end the country’s seven-year war.

The High Negotiations Committee announced the boycott of the Russia-backed conference in Sochi in a tweet Sunday night after a vote held in Vienna, Austria, where a U.N.-led conference was being held. The two-day conference ended, as in many previous rounds, with accusations hurled back and forth between the two sides in comments to the press.

“The (Syrian) regime doesn’t believe in a political solution and it will not believe in the future … it only believes in the military option,” Syrian opposition leader Naser al-Hariri said from Vienna on Saturday.

Russia has been steering a separate negotiating track in Astana, and now in the Black Sea resort of Sochi where the conference is scheduled to be held on Monday with the participation of some 1,600 representatives of the Syrian government and opposition.

Opposition figures have said Russia, which backs Syrian President Bashar Assad’s forces, is trying to undermine the U.N.-led talks. However the spokesman for the U.N. secretary general on Saturday said he is confident that the conference in Sochi will be an important contribution to a “revived intra-Syrian talks under the auspices of the U.N. in Geneva,” and added that the U.N. Special Envoy for Syria Staffan de Mistura would take part in the conference.

Meanwhile, a cease-fire deal to halt the fighting over the rebel-held besieged eastern Ghouta suburbs of Damascus appeared to have crumbled before it even began.