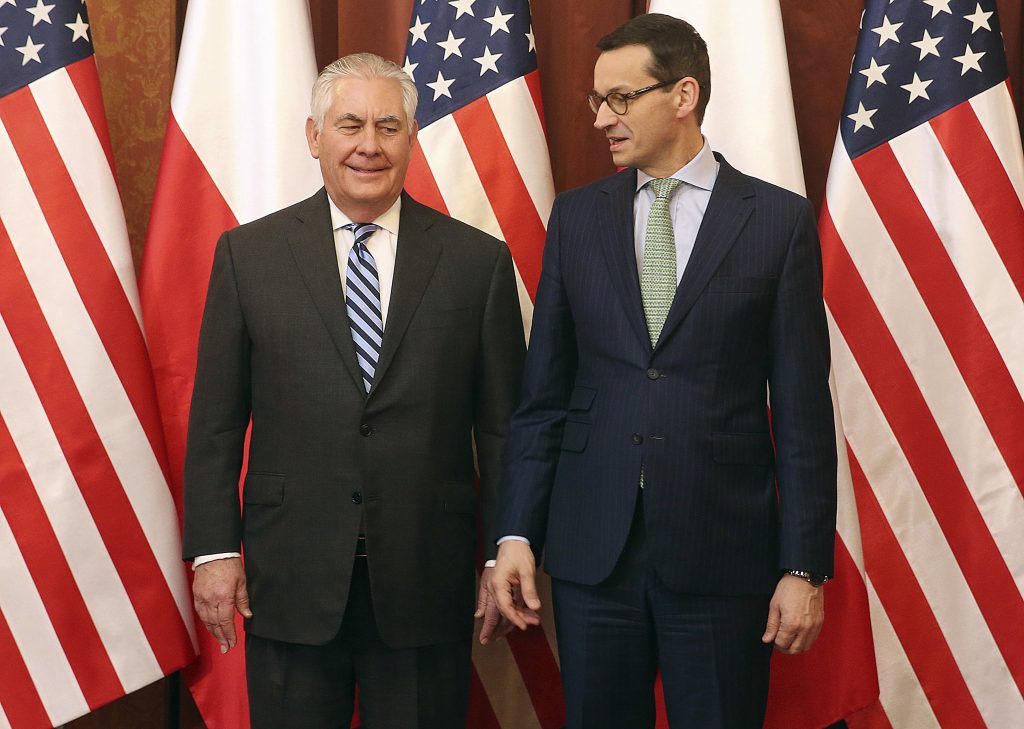 As President Donald Trump declared that “America First does not mean America alone” at a global economic forum in Switzerland, his top diplomat was on a European trip of his own, trying to convince skeptical allies that the oft-repeated phrase is more than just lip service.

Yet a year into Trump’s presidency, his administration has demonstrated that “America First” may, indeed, mean “America alone,” though it remains unclear if that has helped Secretary of State Rex Tillerson’s bargaining position on crucial national security and foreign policy matters.

Amid crises in multiple hotspots and before joining Trump at the World Economic Forum in Davos, Tillerson visited London and Paris with a full agenda aimed at defusing not only the issues at hand but also tensions with Washington.

His mission was primarily to secure British and French support for tough new measures against Iran that might prevent the U.S. from withdrawing from the 2015 nuclear accord. Along the way, he also accused Russia of responsibility for chemical weapons attacks in Syria and chastised Turkey for attacking U.S.-backed Kurd forces there.

“As the old saying goes, it’s always darkest before the dawn,” Tillerson said while wrapping up his European tour in Warsaw on Saturday. “I don’t want to say we’re at the darkest moment of any of those three areas … but I think it’s why we have given it so much attention and are working hard with partners and allies to put mechanisms in place to begin the very, very hard work of addressing the concerns in all three.”

Tillerson left London for Paris on Monday cautiously optimistic that progress could be made with the British and the French on crafting a supplemental agreement to the Iran deal that would address what Trump has said are serious flaws. Trump has vowed to pull out if those issues aren’t addressed by spring.

While Iran will be excluded from those discussions, he said, the working groups would explore “how we might engage the Iranians on discussions to address these issues.”

On Tuesday, French Foreign Minister Jean-Yves Le Drian questioned why the U.S. was focused on securing the side deal only with the three European nations that are individual participants in the nuclear accord — Britain, France and Germany — and not the other parties, China and Russia, or the European Union as a bloc.

It was in Paris, at the inauguration of a new group dedicated to bringing those who use banned chemical weapons to justice, that Tillerson launched his accusations at Russia. In unusually harsh terms, he accused Moscow of violating the 2013 accord brokered with the U.S. to rid Syria of its chemical weapons stocks and the international treaty that bans such arms. He also said Moscow was ultimately responsible for every chemical weapons attack in Syria since it became militarily involved in the conflict in 2015.

Russian officials responded furiously, insisting that the U.S. was inventing new chemical weapons strikes for the purpose of maligning Russia. Still, when Tillerson spoke the next day with Russian Foreign Minister Sergey Lavrov, the spat was not mentioned in readouts by either side.

“Russia has again failed in their commitment because the chemical weapons are clearly there. They are being used against civilian populations and the most vulnerable — children — inside Syria,” he said. “And I think President Trump was pretty clear the last time he saw this happen inside of Syria.”

In Paris, Tillerson also encountered Turkish Foreign Minister Mevlut Cavusolu, whose government has highly criticized U.S. support for Kurdish forces in Syria that Ankara considers terrorists. A Turkish military operation against those forces in the northern city of Afrin entered its second week Saturday despite U.S. calls for restraint, and NATO ally Turkey appeared poised to expand its offense to other Kurd-held sites.

As other U.S. officials have done, Tillerson recognized that Turkey has legitimate security concerns along its border with Syria. But he also renewed the appeal for restraint.

“What we hope is that Turkey is able to satisfy that it has addressed its security concerns on its border, and it can limit the amount of fighting that goes on because clearly there are civilian casualties every time this happened, and we’re already seeing those casualties,” he said.