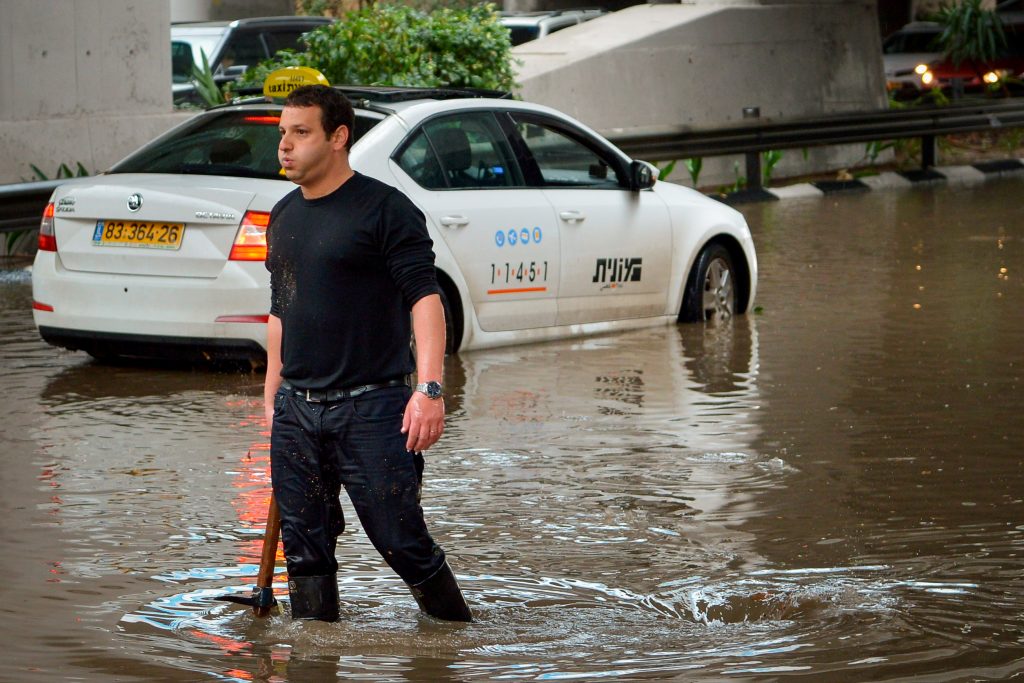 After the death of a hiker in a northern nature reserve early Friday, police and safety officials were redoubling their warnings to hikers, drivers, and even pedestrians to be extremely careful during heavy rain and wind storms – such as those that Israel has been experiencing this week, and are expected to continue through the weekend.

The 41-year-old hiker got stuck in Nachal Zavitan, a deep gorge in the upper Galilee, and was unable to get out. A fellow hiker who had been with the victim returned to the nature reserve’s ranger station and reported that the victim had been experiencing trouble getting through the gorge. As the hours passed and the hiker did not return to the station, it was decided to send out search parties for him. It took eight hours for him to be located, by which time he had become unconscious.

He was retrieved in what rescue officials called one of the most complicated rescue efforts for an individual in Israeli history. He was taken to Poriah Hospital in Teveria for treatment, but he later passed away. The darkness, very heavy rain, and strongly flowing water in the gorge made locating and removing the hiker very difficult, officials said – and a smaller rescue mission was even required in order to help the rescuers get out of the gorge, after the hiker had been evacuated by helicopter.

The incident is one of many that happen on a regular basis in nature reserves and along roads in the Negev and other relatively remote areas, police said. Hikers and drivers need to take weather conditions seriously and rethink their activities – either waiting until the weather clears, or if that is not an option, to take extra precautions to protect themselves.

That goes especially for roads and highways in the south, many of which pass by wadis (winter streams) that tend to fill quickly and flow strongly during very rainy weather. Police promised to be on full alert over the weekend to ensure that drivers observe traffic rules. “We will use a heavy hand against any driver that endangers themselves [sic] on or others by poor or irresponsible driving,” police said in a statement.

Extremely heavy rain is predicted for the entire country Friday and into Shabbos afternoon. A rare storm system coming directly from the north – as opposed to the west, where such storms usually originate – has brought with it extremely cold temperatures. Forecasts updated Friday morning indicate that snow will fall in the central Judean mountains, from north of Beit El to south of Chevron, including in Yerushalayim. As much as 10 cm (4 inches) of snow could accumulate in the higher areas of Yerushalayim, and more could accumulate in Gush Etzion and the Chevron areas. In other parts of the country, residents can expect torrential rains. Police said that those who could avoid going out on Friday should do so.