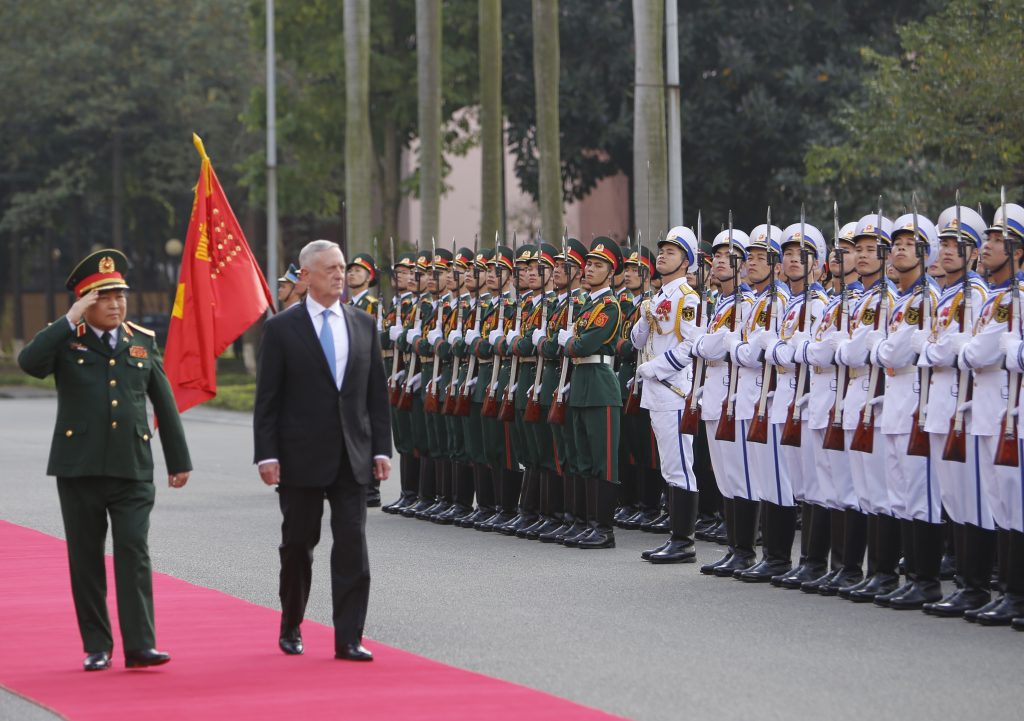 A U.S. Navy aircraft carrier is expected to make a port visit to Vietnam in March, U.S. Defense Secretary Jim Mattis said Thursday. It would be the first such visit in the postwar era.

The planned visit to Danang is likely to irritate China, which is critical of U.S. moves to add to its military muscle in the region.

“Thank you for the increasing partnership with our aircraft carrier coming in to Danang here in March,” Sec. Mattis said in remarks opening a meeting with Communist Party General Secretary Nguyen Phu Trong.

The Vietnamese Defense Ministry said separately that the two defense ministries had submitted their proposals for a U.S. carrier port visit to their leaders. The idea was floated last summer when Lich met Mattis at the Pentagon.

The two met again in Hanoi on Thursday during Sec. Mattis’ first trip to the Southeast Asian nation.

“We recognize that relationships never stay the same. They either get stronger or they get weaker, and America wants a stronger relationship with a stronger Vietnam,” Mattis told Lich.

“From postwar legacy issues to what Minister Lich called the positive trajectory of our military-to-military relations, I’m confident we’re on the right trajectory, sir,” Sec. Mattis said in his opening remarks at the presidential palace, where he and the president sat side-by-side beneath a large bust of revolutionary leader Ho Chi Minh.

Sec. Mattis joined the Marine Corps Reserves in 1969, while the decade-long Vietnam War was ongoing, but did not serve in Vietnam.

His visit happened to come just days before the Vietnamese celebrate Tet, the Lunar New Year.

Next week will mark the 50th anniversary of the Tet Offensive, in January 1968, when the Communist North launched synchronized, simultaneous attacks on multiple targets in U.S.-backed South Vietnam, including the city of Hue. The offensive was a military failure, but it turned out to be a pivotal point in the war by puncturing U.S. hopes of a swift victory. The war dragged on for another seven years before the U.S. completed its withdrawal.

Mattis noted earlier this week that Vietnam’s proximity to the South China Sea makes the country a key player in disputes with China over territorial claims to islets, shoals and other small land formations in the sea. Vietnam also fought a border war with China in 1979.