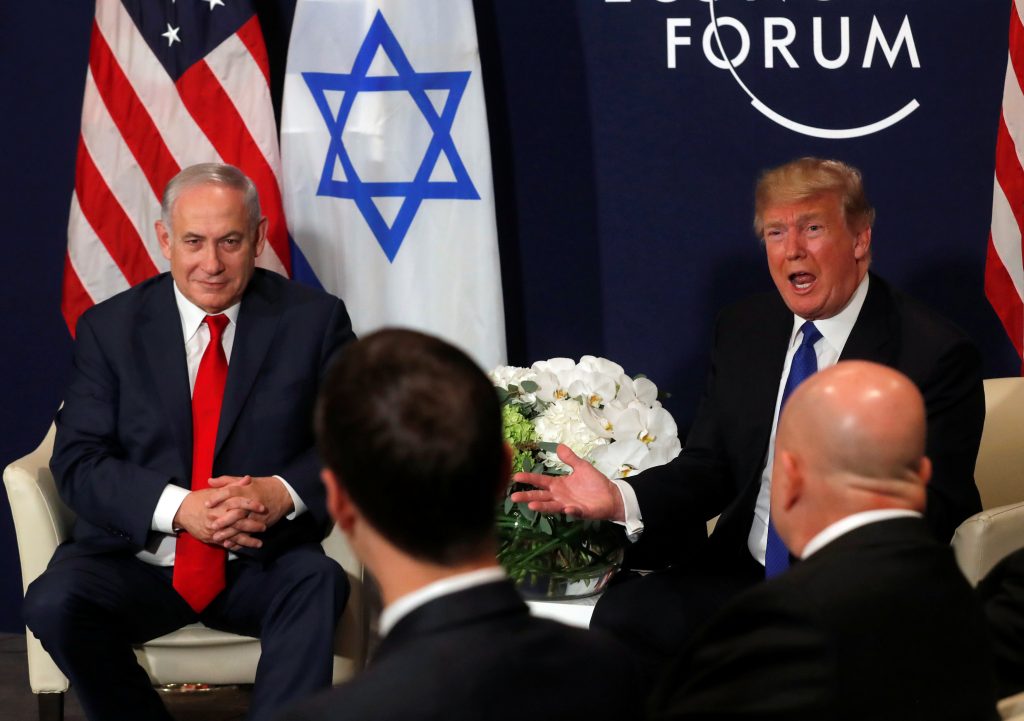 President Donald Trump threatened to withhold aid to the Palestinians if they did not pursue peace with Israel, saying the Palestinians had snubbed the United States by not meeting Vice President Mike Pence during a recent visit.

Trump, speaking after a meeting with Prime Minister Binyamin Netanyahu at the World Economic Forum in Davos, said he aimed for peace in the Middle East.

He said he hoped sound minds would prevail among Palestinians to pursue peace.

But then he warned: “When they disrespected us a week ago by not allowing our great vice president to see them, and we give them hundreds of millions of dollars in aid and support, tremendous numbers, numbers that nobody understands — that money is on the table and that money is not going to them unless they sit down and negotiate peace.”

Netanyahu praised Trump’s decision to recognize Yerushalayim as Israel’s capital and to move the U.S. Embassy there from Tel Aviv.

Washington had already said it would withhold about half the initial aid it planned to give UNRWA, the U.N. agency that serves the Palestinians.

Palestinian leader Mahmoud Abbas has called Trump’s Yerushalayim declaration a “slap in the face” and rejected Washington as an honest broker in any future talks with Israel. Abbas left for an overseas visit before Pence arrived.

Trump said Palestinians had to come to the negotiating table.

Trump said his administration had a peace proposal in the works that was a “great proposal for Palestinians,” which covers “a lot of the things that were over the years discussed or agreed on.”

Trump said that his declaration of Jerusalem as Israel’s capital took it off the negotiating table “and Israel will pay for that,” adding that “they’ll do something that will be a very good thing,” without elaborating.

Earlier at the World Economic Forum, Jordanian King Abdullah said Yerushalayim had to be part of a comprehensive solution.

He said Trump’s decision had created a backlash, frustrating Palestinians who felt there was no honest broker.

But he added, “I’d like to reserve judgment because we’re still waiting for the Americans to come out with their plan.”

At the Trump–Netanyahu meeting on the sidelines of the Davos Economic Forum on Thursday, Netanyahu expressed his appreciation to Trump for “your historic decision to recognize Jerusalem as Israel’s capital and to move the embassy, and now to expedite the movement of the embassy, to Jerusalem.

“I want to say that this is a historic decision that will be forever etched in the hearts of our people for generations to come. People say that this pushes peace backward. I say it pushes peace forward because it recognizes history, it recognizes the present reality, and peace can only be built on the basis of truth. And by recognizing this history, you’ve made history. And we will always remember that.”

Touching on Iran, the Israeli leader said: “We support you completely in your stalwart position on the Iran nuclear deal. You’ve said it’s a disastrous deal. You’ve said that if its fatal flaws are not fixed, that you should walk away from it. And I want you to know that if you decide to do that, then we will back you all the way.

“We also appreciate the fact that you confront Iran’s aggression with us and with other parties in the region as never before. I’ve never seen the holistic alliance between the United States, Israel and your other allies in the region as strong, as unified, as it is under your leadership.

“And the last point is, you stood up for Israel at the U.N. in a remarkable way — rock-solid support. This is a place — it’s a house of slander against Israel and against the United States. And by word and deed, you have told them enough is enough,” Netanyahu said.

In response, President Trump recounted his stand at the U.N:

“I have to say, on the United Nations, we were pretty much out in the wilderness by ourselves — the United States. And we heard every country was going to be against us. And it was very interesting. I said, you know, we give billions and billions of dollars to these countries. It amounts to hundreds of millions, and sometimes into the billions for certain countries, and they vote against us. And I made a very simple statement that I’m watching. I’m watching. And we ended up getting 68 votes, either ‘yes’ or ‘we’ll take a neutral position,’ which was okay too.

“Israel has always supported the United States. So what I did with Jerusalem was my honor. And hopefully, we can do something with peace. I would love to see it.

“You know, if you look back at the various peace proposals — and they are endless — and I spoke to some of the people involved, and I said, ‘Did you ever talk about the vast amounts of funds, money that we give to the Palestinians?’ We give, you know, hundreds of millions of dollars. And they said, ‘We never talk.’ Well, we do talk about it,” Trump said.

“Jerusalem is not off the negotiations table; rather, the U.S. is outside the international consensus. Those who say that Jerusalem is off the table are saying that peace is off the table,” said Erekat. “There will be no peace without East Jerusalem being the sovereign capital of the State of Palestine.”

When Trump was asked at the press briefing in Davos if he had read Mahmoud Abbas’s derogatory comments about him, the president replied:

“No, I didn’t really read his remarks, personally. I think I’m probably better off not seeing them. But we’ve done a lot for them, and hopefully they’re going to make peace for their people.

“You know what, it’s many years of killing people. It’s many years of killing each other. They have to be tired and disgusted of it. So let’s see what happens. I think, eventually, very sound minds — I hope sound minds — are going to prevail. And it would be a great achievement of mine. I’ve said it from day one, if we could make peace between Israel and the Palestinians — if we do that, I would consider that one of our truly great achievements,” the president added.

In attendance at the press briefing on Thursday were: White House advisor Jared Kushner, Secretary of State Rex Tillerson, National Security Advisor H.R. McMaster. For the Israelis, Ambassador to Washington Ron Dermer was alongside Netanyahu.