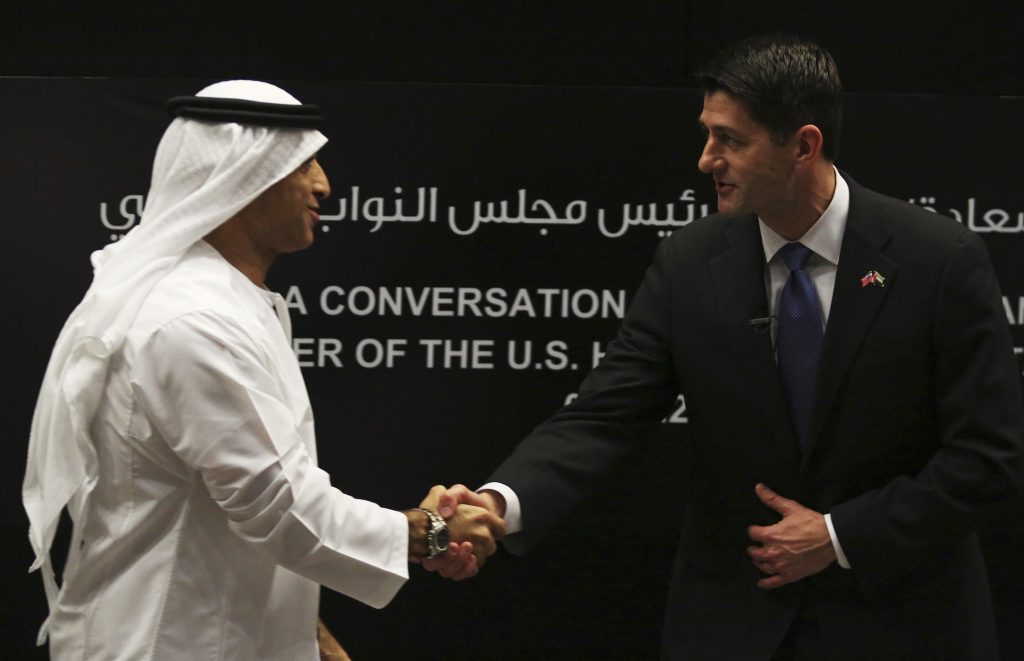 U.S. House Speaker Paul Ryan came to the United Arab Emirates on Thursday promising to take a harder line on Iran’s ballistic-missile program and its regional proxies, and saying he was open to imposing new economic sanctions.

His Emirati hosts couldn’t have been happier. “We could have given that exact same speech,” Emirati Ambassador to the U.S. Yousef al-Otaiba said.

Gulf Arab nations, which view Iran as a regional menace and opposed the 2015 nuclear deal, have welcomed the hard line adopted by the Trump administration and the Republican-controlled Congress. But there are differences lingering beneath the smiles and handshakes, including over Washington’s alliance with Qatar, which is being boycotted by the UAE and three other Arab nations.

Speaker Ryan said the nuclear deal should remain in place, but that more economic sanctions should be imposed to counter the “Iranian threat.” He pointed to Iran’s ballistic missiles and its “land bridge” to Syria, where it has provided crucial military and economic support to President Bashar Assad.

“I want you to know that we see this issue the same way that you do,” he said. “Let me be clear: Congress will not repeat the mistakes of the past. And we will not remain silent about the plight of the Iranian people who have faced brutal repression at the hands of the regime in Tehran.”

Al-Otaiba, a well-known figure in Washington, also said Iran must be confronted.

“If you live in the UAE, the biggest problem is Iranian support for terrorist proxies, its missile program, its funding and subversion of friendly countries in this part of the world,” he said. “I couldn’t be happier to hear a speech like this from the Speaker of the House.”

The UAE is a major U.S. ally that hosts some 5,000 American troops and the U.S. Navy’s busiest foreign port of call. The UAE also has purchased billions in American armaments, including the U.S.-made Terminal High Altitude Area Defense system, or THAAD.

The UAE is also a key member of the Saudi-led coalition at war with Yemen’s Houthi rebels. The U.S., which is providing some support to the coalition, and its Arab allies accuse Iran of providing increasingly sophisticated weapons to the Shiite rebels, including a ballistic missile fired at the Saudi capital on Nov. 4. Iran denies arming the Houthis.

The war has been locked in a stalemate for most of the last three years, with more than 10,000 civilians killed, many in Saudi-led airstrikes using American armaments. Mr. Ryan did not mention the humanitarian crisis in Yemen, which the U.N. has described as the worst in the world.

The U.S. is still waging a longstanding campaign of drone strikes targeting suspected members of al-Qaida in the Arabian Peninsula. A January 2017 raid ordered by Trump killed a U.S. Navy SEAL and 30 other people, including women, children and an estimated 14 militants.

“You fight this battle every single day against al-Qaida in Yemen,” Ryan said. “You understand firsthand why we must take these threats very seriously.”

No one mentioned Qatar at Thursday’s event.

The U.S. ally has faced a boycott since last June by the UAE, Bahrain, Egypt and Saudi Arabia over allegations it supports extremists and maintains too-close ties to Iran.

Qatar, which has supported Islamists who the UAE views as a threat to its system of hereditary rule, denies backing terrorists. It also shares a massive offshore natural gas field with Iran and has increasingly relied on Iranian airspace for flights of its state carrier Qatar Airways.

Qatar hosts some 10,000 American soldiers at the al-Udeid Air Base, which is the forward operating base of the U.S. military’s Central Command.

Al-Otaiba, who had his personal emails hacked and released publicly during the Qatar crisis, has been a vocal critic of Doha. He’s also suggested U.S. forces relocate from al-Udeid to somewhere else, perhaps the UAE, but did not offer that suggestion publicly Thursday.