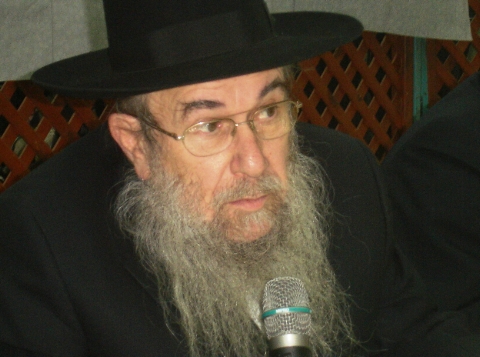 Harav Reiss, 75, had been battling a serious illness for the last few months, and traveled overseas for treatment, but the gezeirah had been sealed.

He was born in Kislev 5703/1942, to his parents, Reb Pinchas Menachem and Nechama Reiss.

When he came of age, he married, tblch”t, Dvorah Zoltobrotzky, and settled in Bnei Brak. Together they built a home of Torah and yiras Shamayim; many of their descendants serve as klei kodesh.

Seen as a mechanech par excellence, over the years Harav Reiss served in many chinuch positions, notably as menahel of Seminar Scharansky in Tel Aviv. He was noted for his clear-cut hashkafos, in addition to being a talmid chacham. He never raised his voice to anyone.

Harav Reiss was a senior columnist for the Hebrew Hamodia’s Torah magazine, writing a weekly column for 30 years. He compiled these articles into several volumes, on Torah and the Yamim Tovim.

A staunch Gerrer Chassid, he was a close associate of the Gerrer Rebbes, zt”l and shlita. He was known as very fluent in many Chassidic classics, notably Sfas Emes.

In recent years, he moved to Ashdod, to be closer to his children.

His levayah left from the Gerrer Shtiebel on Ohr Hachaim Street in Bnei Brak, where he served as baal tefillah on the Yamim Noraim, via his home in Ashdod. Kevurah was in Ashdod.

His loss will be felt by the thousands of talmidos he cultivated to Torah and yiras Shamayim over the years.