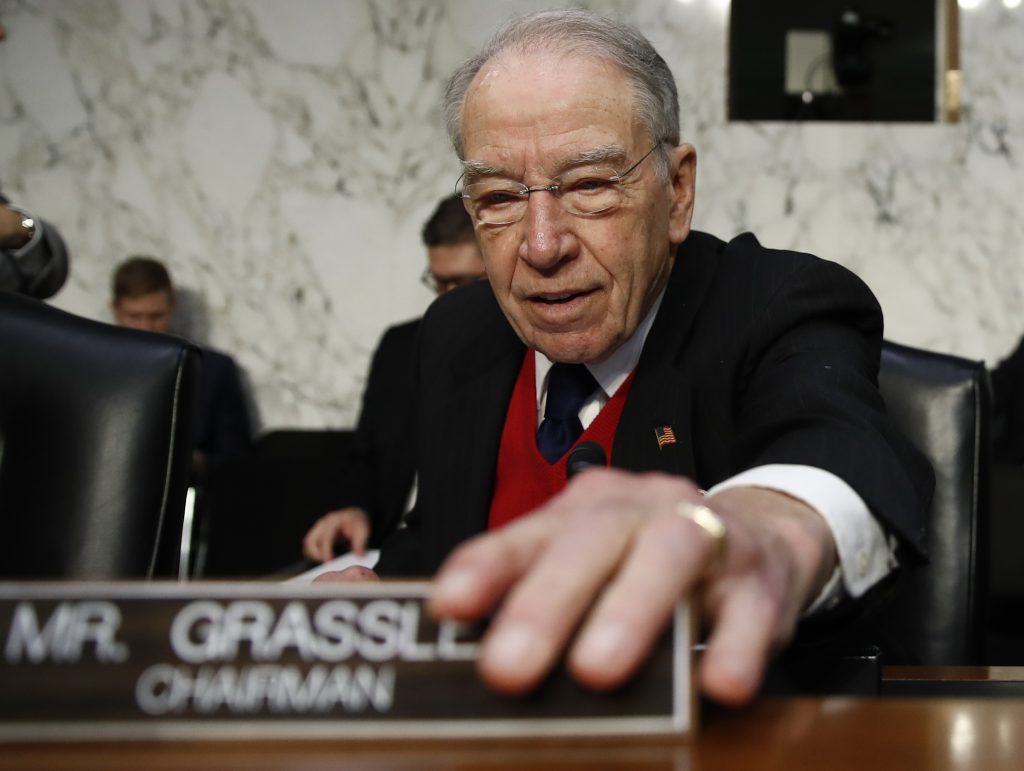 The Senate Judiciary Committee is finishing its investigation into a June 2016 meeting between Russians and President Donald Trump’s campaign, and the Republican chairman of that panel says he wants to release transcripts from closed-door interviews with Trump’s son and others.

Iowa Sen. Chuck Grassley said at a committee hearing Thursday that he hopes to work out an agreement with the top Democrat on the Judiciary panel, Sen. Dianne Feinstein of California, to release the transcripts from interviews with Donald Trump Jr. and others who attended the campaign meeting in Trump Tower.

“That section of our investigation is done,” Grassley said. “So, now it’s time to start officially releasing the transcripts of all witness interviews we have done related to that meeting. Let’s get them out there for everyone to see.”

Feinstein seemed open to such an agreement, telling Grassley at the hearing that she was “delighted” to hear his remarks and “to the best of my knowledge I have no disagreement with them.”

In a statement issued after the hearing, Feinstein said she agrees the transcripts should be released to the public if that doesn’t interfere with the panel’s investigation. She also said she thinks they should be released to special counsel Robert Mueller, who is doing his own investigation into Russian meddling in the 2016 elections and any ties to Trump’s campaign.

In addition to Trump Jr., the committee has interviewed four other people who attended the Trump Tower meeting in New York: publicist Rob Goldstone, who set up the meeting with a promise of dirt on Democrat Hillary Clinton; Rinat Akhmetshin, a prominent Russian-American lobbyist; Ike Kaveladze, a business associate of a Moscow-based developer and former Trump business partner, and a translator.

The panel has not been able to interview Jared Kushner, Trump’s son-in-law, or Paul Manafort, Trump’s former campaign manager, even though both attended the Trump Tower meeting. Grassley said Thursday that he had hoped to interview Kushner, but the chances of that interview were “shot” after Feinstein unilaterally released a transcript from another interview conducted as part of the committee’s Russia investigation earlier this month.

Feinstein said in her statement that she hopes Grassley will try to move forward with public hearings for Kushner and Trump Jr. So far, all of the interviews have been held behind closed doors.

Grassley had also hoped to interview Manafort, who last year was indicted by Mueller on charges tied to foreign lobbying work. Feinstein had pressed for a subpoena before the indictment.

The committee did not interview Natalia Veselnitskaya, the Russian lawyer at the center of the Trump Tower meeting. But committee aides said they plan to release her written responses to a letter that Grassley sent her last year. The aides said all of the releases could take time as the panel works to redact classified portions of the interviews.

Separately Thursday, Senate Democratic Leader Chuck Schumer criticized Republicans who have been escalating attacks on the FBI and Justice Department as Mueller’s investigation has come closer to Trump’s inner circle. House Republicans have suggested FBI officials have conspired against Trump and began their investigation into his Russian ties without sufficient evidence. That criticism has ramped up since the revelation of anti-Trump texts between two Justice Department officials who were at one point part of the Mueller investigation.

Schumer singled out a classified memo that the House Intelligence Committee has produced and may move to make public. Republicans have said the memo alleges FBI misconduct and some have argued that the public should see it.

“What began as an attempt to discredit the investigator has now devolved into delusional, self-serving paranoia,” Schumer said in a morning floor speech.

In a letter Wednesday, the Justice Department warned the House Intelligence Committee’s Republican chairman, California Rep. Devin Nunes, that releasing the classified memo to the public could be “extraordinarily reckless” and asked to review it.

Assistant Attorney General Stephen Boyd wrote Nunes that given the panel’s role in overseeing the nation’s intelligence community, “you well understand the damaging impact that the release of classified material could have on our national security and our ability to share and receive sensitive information from friendly foreign governments.”

Republican senators have been mostly silent on the memo as House Republicans have hinted at its eventual release. But Texas Sen. John Cornyn, the No. 2 Senate Republican and a member of the Senate Intelligence Committee, said Thursday that he believes Nunes and the Justice Department need to work out their differences.

Cornyn said he has been briefed personally by Nunes on the memo, but has not yet read it.

Eric Tucker contributed to this report.