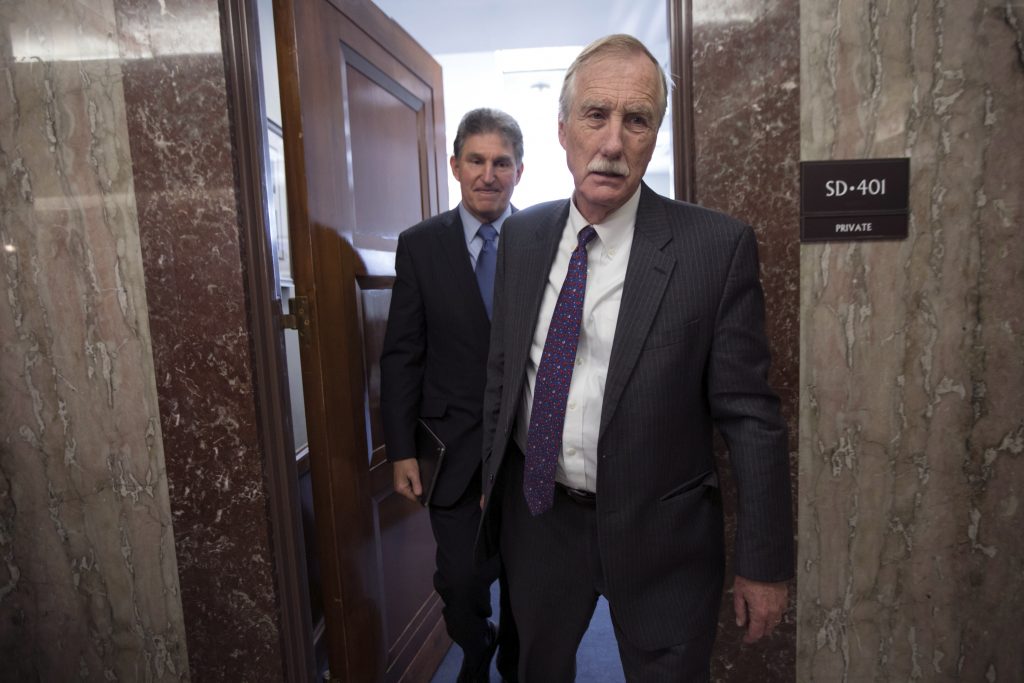 Democrats said they were heartened Thursday by President Donald Trump’s support for an immigration plan that would provide a pathway to citizenship for hundreds of thousands of young immigrants, while Republicans were more cautious.

Moderate Sen. Joe Manchin, D-W.Va., said he was “very encouraged” by Trump’s surprising words, which the president made late Wednesday in impromptu comments to reporters. Like other Democrats, Manchin shrugged off subsequent attempts by White House officials to pull back Trump’s comments.

“The president is the man in charge. We’re going to work with him,” Manchin said.

Among Republicans, Oklahoma Sen. James Lankford said he supports the citizenship pathway Trump described. Sen. Mike Rounds, R-S.D., called Trump’s words “positive” and said Trump’s description “gives us a better sense” of his views but added, “We have a long way to go yet.”

Trump’s pronouncement came as the White House announced it would unveil a legislative framework on immigration next week that it hopes can pass both the House and the Senate. The president’s remarks amounted to a preview of that framework. He said he’ll propose $25 billion for building a wall on the U.S.–Mexico border and $5 billion for other security measures.

“We’re going to morph into it,” Trump told reporters. “It’s going to happen, at some point in the future, over a period of 10 to 12 years.”

Immediately after Trump spoke, a senior White House official stressed that the idea of a pathway to citizenship for so-called Dreamers was just a “discussion point” in the plan that the White House intended to preview to the House and Senate.

The official spoke on condition of anonymity to preview the administration’s thinking on a contentious issue that has roiled lawmakers for months.

Despite his previously harsh rhetoric, Trump told reporters he had a message for the Dreamers: “Tell ’em not to be concerned, OK? Tell ’em not to worry. We’re going to solve the problem.”

Trump has said repeatedly that any deal to protect those immigrants from deportation is contingent on money for the border wall and other security measures. Trump also wants to limit the family members that immigrants are able to sponsor to join them in the U.S. and either replace or transform a visa lottery aimed at increasing diversity.

Trump has given Congress until March to come up with a plan to protect the nearly 700,000 young people who had been protected from deportation and given the right to work legally in the country under the Obama-era Deferred Action for Childhood Arrivals program, or DACA. Trump announced last year that he was ending DACA.

Trump expressed confidence that a deal can be reached, and said he’d like to see one hammered out by the time he returns from Davos, Switzerland, on Friday. John Kelly, Trump’s chief of staff, stayed in Washington to help work out an immigration deal, said White House spokesman Raj Shah.

White House press secretary Sarah Huckabee Sanders said earlier Wednesday that the framework to be unveiled Monday “represents a compromise that members of both parties can support.”

The White House was trying to take control of the process amid criticism that the president had taken too much of a back seat during recent negotiations and had sent mixed signals that repeatedly upended near-deals.

“The president wants to lead on this issue, and that’s exactly what we’re going to do,” Sanders said.

But he said Wednesday that providing an opportunity for citizenship had its positives. “I think it’s a nice thing to have the incentive of after a period of years being able to become a citizen,” he said.

Meanwhile, on the Hill, senators from both parties were making a fresh search for their own compromise immigration legislation, though leaders conceded that the effort wouldn’t be easy and were already casting blame should it falter.

Around three dozen senators from both parties met privately Wednesday, and two top lawmakers said they’d try crafting a compromise bill based on colleagues’ suggestions. The goal is to produce consensus legislation that would be the starting point for Senate debate on immigration, which is expected to begin Feb. 8, said Sens. John Cornyn, R-Texas, and Dick Durbin, D-Ill., their parties’ No. 2 leaders.

“We’re the Senate, we have our own responsibility under the Constitution, and we decided in this room to move forward,” Durbin said afterward. “If the president has some ideas he’d like to share, of course we’ll take a look at them.”

Sen. Lindsay Graham, R-S.C., said in a statement that he was “extremely pleased with the number of senators — from both sides of the aisle” — who had accepted his invitation. “My hope is that we can reach an agreement before February 8,” he said.

Senate Majority Leader Mitch McConnell, R-Ky., has said if senators cannot produce a compromise plan by Feb. 8, he would open a debate on immigration legislation that would be “fair to all sides.” That suggests both parties would be allowed to offer amendments.

Feb. 8 is the date legislation expires that reopened the government after a three-day shutdown, which began after Democrats demanded movement toward an immigration deal as the price for financing federal agencies.